Towards an Ethnohistorical Hermaneutic of Pastrami

When Dumneazu has business in New York - which is increasingly rare these days - what does he eat for lunch? Very simple to answer. God gets off the plane, heads right down to lower Manhatten, and takes a ticket at Katz's Deli on Houston St. This is the Wailing Wall of old style New York corned beef or pastrami. 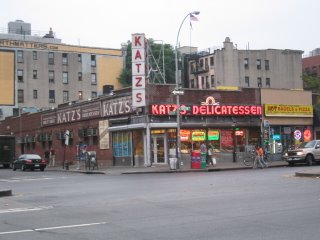 Fork over ten bucks for the pastrami. Don't ask questions. Just do it. Ten bucks for pastrami... actually it costs more these days. But who cares? It's Katz's! With luck you may have room left over for a hot dog or a knish. And maybe a nice glass tea? I miss pastrami. I have learned to cure my own corned beef at home here in Budapest, but the spicing and smoking that goes into pastrami means I don't often get to eat the Cold Cut That God Eats For Lunch. 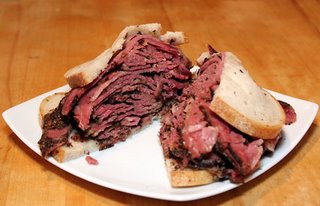 Where does pastrami come from? Is it even a "Jewish" food? Like a lot of food we identify as Jewish, pastrami is a food that was adopted by Jews and has gone through a radical transformation in the immigration process. Originally, Romanian Jews brought the idea of pastrami with them when they came to the US. In Moldavia pastrama is usually a cured, semi-dry smoked meat, usually made from sheep, that can stay unrefrigerated for months. Jews possibly cured their own kosher pastrama as a food that could be carried along on trips where no kosher meat would be available, kind of like kosher beef jerky - chewing on old truck tires is one way to describe the texture for Moldavian peasant pastrama. One way to make the dried pastrama palatable is to steam it. Another is to slice it thin. Today, Romanian pastrama is sold in supermarkets packaged like any cold cut. 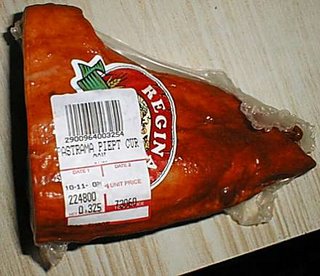 But the origina of Romanian pastrama lie in the heritage of the Ottoman Empire, which ruled Wallachia and Moldavia for hundreds of rather productive years, at least as far as Wallachia and Moldavia go. The Turks brought pastirma with them - slabs of beef covered in spice paste and then air dried in high mountain curing houses. The pastirma is wholesaled in huge meter long slabs. 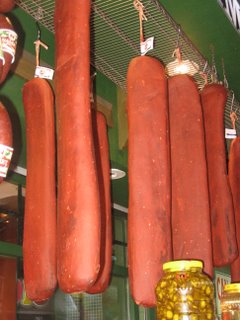 The paste today contains a lot of cumin and hot paprika, so the meat becomes quite spicy. Pastirma didn't taste anything like I had expected - understandable when you remember that my taste buds were trained on the grease-and-black-pepper pastrami of the Bronx. This was pastirma from Anatolia. It was a truly mediterranean combination of sour, salty, spicy, and savory. Kind of like what stuffed olives would taste like if olives had legs and said moooooo. 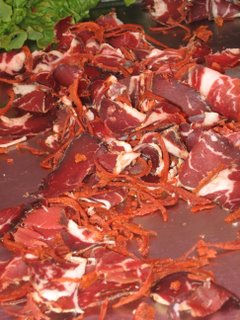 Pastirma is eaten as part of a meze course - appetizers that precede a meal or are simply set out to substitute for a cooked meal, especially when drinking raki. 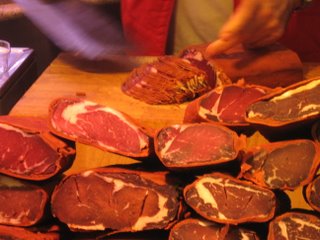 Subsequently, pastirma is not cheap. A kilo goes for about EURO 20, making it one of the most expensive of meze. But then, meze is how you inpress people, isn't it? And at Namli Pastirmaci in the market behind the Egyptian Spice market in Istanbul, impressing people comes easy. How about a bit of salad to go? Cold stuffed peppers? 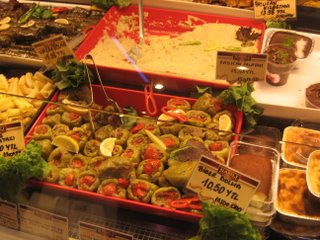 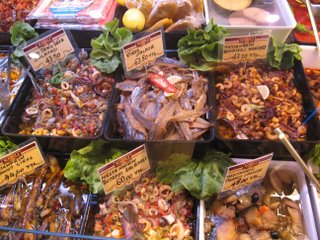