The End of Kadar Etkezde. 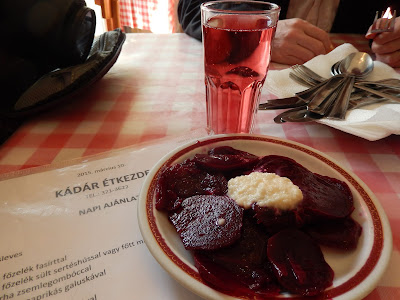 No new posts since February is a record hiatus for this blog, but I have an excuse. There was a worldwide pandemic going on.. It is not that I didn’t want to write about it, but the Apocalypse can be distracting, and with so many writers busy with the same topic I felt others did it better. (Incidentally, that is the same excuse I give for why I don’t play bluegrass banjo.) I consider myself lucky that I left New York and returned to Budapest in mid February, just before the virus hit New York and Europe in full force. East Europe, for many reasons, managed to avoid the horrific death tolls seen in Italy, Spain, and ferchrissakes, the USA. Also, the covid-19 crisis in Hungary was a driving reason that Our Great Leader (May the Good Lord grant his favorite football teams victory) was voted emergency powers that some less forgiving (or more sentient) have likened to a dictatorship. One of those emergency powers is aimed at freedom of the press, particularly opposition bloggers and Facebook posters, some of whom have found the police knocking on their doors at dawn and a big black police car waiting outdoors.

The official explanation for this is to prevent the spread of misleading news about covid-19. And therefor I decided that I will not spread any misleading news. Given the prevailing atmosphere, I wouldn’t spread anything at all, viral or verbal. Hungarians are keenly apprehensive about what “outsiders” have to say about them, and foreign journalists regularly receive hyper-nationalistic complaints from various Local Lilliputian Mugwumps accusing them of “misrepresenting Hungary” … the problem is that now these have the force of law behind them. So, instead no opinion will be offered, unless you can find a way to buy me a socially distanced beer and listen to me complain in person from across a large picnic table. That said, I was stuck alone in our flat for three months, not venturing farther than our local market across the square.  During this time I collected, and froze, a decent percentage of Hungary's spring strawberry crop. Unlike most years, there were almost no imported strawberries for sale in our local markets, which is not a bad thing. Hungarian strawberries are fantastic at their seasonal best.

Budapest is quickly getting back to normal, faster than I feel comfortable with. My district, which is both the Jewish Ghetto and the hyper-touristic “party district” is beginning to get a night life back, although I am not about to go out and enjoy a beer in public anytime soon. The Covid-19 virus seems specifically designed to seek me out and kill me. I tick off lots of the boxes for “Face certain death, Earthling!” so I have been safely cowering up in my third floor Fortress of Solitude, venturing out only to shop at our local market. 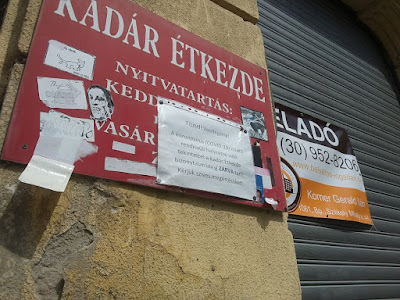 On a much sadder note, among the casualties in the restaurant business is the best damn Hungarian restaurant I know of, Kadar’s Etkezde. Sometime around mid April a sign appeared on the Kadar announcing “For Sale”. This is not a minor event. This means that there is no longer any restaurant in Budapest that I can suggest to visitors looking for an authentic, home style Hungarian meal of any quality. My guess is that the owner and staff decided that rather than pay the overhead on the closed lunch spot they could just put the place up for sale and retire.

I will sorely miss their Wednesday goose risotto, which we used to order for take out, allowing them to pack an unsightly huge half goose carcass and three fat wings on top of a huge portion of rice pilaf for FT 1500 (USD $5.00) Once we got it home I would strip the meat from the goose carcasses and it was well enough to make an another batch of goose risotto. I will also miss their sólet, the Hungarian Jewish version of the Yiddish cholent, which was the house specialty and the reason the Kadar was first opened in the 1950s and allowed to function as a private restaurant under Communism, in order to serve the hungry Jewish comrades working in the neighborhood who missed the comforts of old style Hungarian Jewish food, but didn't mind it being served next to a pork chop just in case any of the Marxist fundamentalists at work were interested in ratting on their Semitic comrades.
They used the breast meat from those goose carcasses for the goose meat loaf they served with the sólet, and the legs went with either sólet or braised red cabbage. The rest - carcasses and wings - went into the risotto, or more precisely, the pilaf. In Hungarian Jewish cooking goose replaces the role that pork has in Hungarian cooking. It provides meat, cooking fat, and soup stock, and until recently you could get amazing goose salami at the Orthodox kosher butchers shop on Dob utca down the street. Now I honestly can’t tell you where to go for home style goose meat anymore. I am sure you can find Hungarian Jewish sólet on some other menu in Budapest – it just won’t be from a specialist who has fifty years of experience in the genuine product.

Kadar fell into a beloved, and rapidly disappearing category: the non-Kosher Jewish restaurant. Most of my favorite places are "treyfeterias": Katz’s in NYC, Hobby’s in Newark, Chez Schwartz’ in Montreal. You can’t usually get ham in these places, but they will serve meat with cheese or sour cream. It weeds out the Glatt Kosher Orthos, but allows less fastidious Jews some sense of culinary safety. In places like new York, this cuts out a large segment of the Jewish customer base who still require strictly kosher food when out of the house. And kosher meals are usually at a premium price range – this killed the traditional cheap lunch at New York delicatessens in the 1970s, as more people adopted the stricter Hasidic “Glatt Kosher” rules and deli prices rocketed. But there will always be an attraction for non-kosher “Jewish style” deli food.  Nobody eats a Rueben sandwich because it tastes good… they eat it because it is a corned beef sandwich with sauerkraut and cheese on it. It has no tradition. Pastrami, now that carries tradition. In our family, clams have tradition. When I was 12 my father took me out to City Island, the fishing hamlet located at the tip of the Bronx, and introduced me to clams on the half shell.

I believe that original clamfest was intended as a guarantee that I should never wear the culinary shackles of the Jewish Religion. No practicing Jew in his right mind would ever eat a live clam. A shrimp, maybe, hidden inside Chinese fried rice… but a clam? The only thing less kosher would be rabbit, or suckling pig in its mother’s milk. Since then clams have become a generational ritual in the family: my son, born in land locked Hungary, started wolfing down live bivalves when he was nine. I buy the clams at the Korean supermarket for dirt cheap - one can get a dozen for what you would spend on two clams in a restaurant. And then I shuck them, a technique that takes skill but all of my fingers are still attached to my hand, so I am doing something right. And my Dad is still eating those babies... my brother fed him oysters for his 94th birthday on June 20. The Old Man is still going strong. So Happy Fathers Day, Dad, and we still have dozens of clams to go. 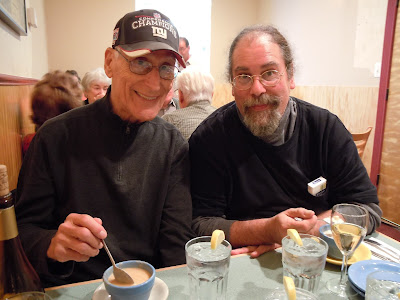