Winter is a time when everybody can use cheering up. Hungary has had a relatively easy winter this year, compared to the sci-fi frozen hell North America has been enduring. Everyone would surely be grateful for an invasion of horned demons coming to scare winter away. Here in the Balkan regions (I know, Hungarians hate referring to where they live by anything but "Central Europe... but its a culture spectrum and we gonna get Balkan now) there is an old tradition of winter Carnival figures masked in shaggy sheepskin costumes and wearing huge cowbell belts dancing through the streets around Mardi Gras time.

From as far south as Greece, where they appear as babouyeri,and up through Bulgaria where they are callled Kukeri and across the Balkans as far as Slovenia, these masked figures are actually vague memorials to the Dionysus cult which have adapted themselves to making appearances on the Christian calendar. You remember Dionysus? The ultimate frat boy of the Greek pantheon? Hung out with Pan a lot. Greek texts about Dionysus are one long Classical Greek ode to dicks and ummm... shagging. Sure, you can convert an entire civilization to Byzantine Orthodoxy or even Roman Catholicism, but an Orphic ritual  sausage party cult filled with wine and dick jokes never gets old. Might as well incorporate it into the official celebration before it gets out of hand and becomes the year round religion instead.


Just as we have Mardi Gras to celebrate one big last blow out before the forty day period of lent so do the closet Dionysians of the Balkans have their Kukeri traditions. In Hungary we have the Busójárás in the town of Mohacs, a city on the Danube with a big minority population of Sokac, who are Catholic Slavs not quite Croat nor quite Serb. Their version of the Balkan Goat Devil Dance has since been re-interpreted into some kind of dimly fabricated and non historic fairy tale during which the busó masked dancers scared the invading Turks off. (Historical note: The Turks, in fact, won at Mohacs and ruled Hungary for 160 years.) It has become rather commercialized these days, but then, what Carnival isn't? The Slovenian variety are called kurent, and the festival and parade is the kurentovanje. There are two main varieties: horned kurent and feathered kurent. Never a lack of choice in Slovenia!

So what do a non-skiing Jew and a Buddhist do when winter fever gets too heavy to bear and a vacation is in order? Head out to carnival in... Slovenia! Why Slovenia? Well, for one there is the town of Ptuj. One can visit Ptuj simply because of the name of the town. How many towns are there named for onomatopoetic sounds involving mucus?

Ptuj is, however, a jewel: the oldest town in Slovenia, with streets laid out and intact since Roman times, set in a hilly wine growing region, with castles and ancient churches and museums a plenty with great cheap accommodation and good food - which kind of describes about 70% of Slovenia's small towns. Ptuj is famous for its carnival, Pust, which draws crowds from all across Slovenia. I had seen photos of the masked dancers - who are classics of the Balkan Goat God syndrome - and suggested we check it out. Six hours on train, not pricey, and bizarrely friendly people everywhere. It did the job: winter blues gone.

Carnival is not for the stuck up among us. In Hungary it has devolved into a party day for children to wear costumes, but in many Catholic countries like Slovenia it is hard core silly season, time to drink, act like clowns, literal clowns, and eat all that greasy roast pork that you are going to be abstaining from during lent. And what could be a better than an international festival parade of carnival masks! First we got the locals: whip snapping "ploughmen" who scare off the evil spirits of winter with cracking whips. And yes, they were skipping through the streets to Alpine accordion oom-pah music.

Few musical genres are as hard for me to bear as Alpine music. Living in a country next door to Austria has made me sensitive to this most cringe-worthy of repertoires. I play diatonic button accordion, and although invented by Germans in the 19th century, the squeezebox traveled the world over becoming the paleo-synthesizer of the poor and technologically needy, producing dynamic and funky modal traditions of music like Zydeco, Madagascar spirit possesion music, Slovak mountain music and Irish reels. Alpine music, however, are those variety shows you see on Austrian and Bavarian TV in which geriatric people swig beer steins seated at benches, swaying while a series of singers clad in dirndl and lederhosen warble through a slick, geeky song and dance routine based on the worst Heidi of the Alps stereotypes imaginable. As if that's not bad enough, watching one of these shows on a TV in an Austrian motel for more than an hour will reveal a fetish with novelty singers: Africans dressed in lederhosen yodeling, underage teenage twins playing accordions on inline skates, and the soundtrack to the obscure but widespread genre of Alpine softcore porn. Singing raccoons and thalidomide babies can not be far behind. You know that video with the goofy guy wearing a suit outfited with bicycle horns beeping away as he dances to an oom-pah band? Yes.. Konis Hupen - with almost 3 million YouTube views - is a classic of the genre. (Warning: if you click on that link be sure to have something to protect your eyes. They will burn.)

So forgive me God, I had to face my fears and look the demon of Alpine accordion music in the face and scream "Do your worst! You can't hurt me!" Understand: Slovenia is an incredibly diverse country with about six separate climate zones, about four distinct cuisines, and about 50 dialects of the Slovenian language, There is some really good, funky Slovene music, especially among the Slovenes living just across the border in the Resia Valley of Italy, played on fiddle for Carnival, one of the most stubbornly traditional fiddle traditions left in Europe, great stuff - I have been there and even got drafted into playing a dance when the local fiddler passed out drunk (you get free food if you play music, too!)


But you can't get to Resia without a car and we were in Ptuj. Which is the heart, soul, endocrine system and gallbladder of Slovenian Alpine accordion music. And Slovenia is the heart of the Alpine accordion world - the home of Slavko Arsenik, the Paganini of Oom-Pah. In the USA there is the Slovenian style of polka music, which still depends in large part on playing these technically limiting diatonic button accordions. Of course, Slovenes have also played on piano accodions - both the legendary FrankieYankovich and the oddly unrelated but similarly named Slovenian American Weird Al Yankovich are prime examples.

And the kids playing them - kids, still wearing braces on their teeth - were in the Hendrix range of control on their instruments, masters of some of the most annoying melodic phrases in the history of popular music. And by late afternoon, as the parade had ended and all the kurrent masqueraders were busy tying one on at the main market square festivities, they would pogo dance to this music, creating a wild cacaphony that drowned out everything else while they shook and jumped and just made noise, glorious noise, noise to scare the winter away. In the tent were the two main attractions of a Ptuj carnival: beer and donuts.

Lots of donuts. On every corner... crates and crates of donuts. When we went out to lunch the next day before returning to Budapest, we went to a local restaurant to see a room full of old people at 11:30 AM drinking wine and eating donuts. Our waitress - helpful and friendly as all Slovenian waitresses were - pointed out the daily special - donuts! - and explained that the donuts there were house made and very special. We passed. there is only so much Goat God and donuts one person can deal with in a weekend.  Oh.. and this helped. 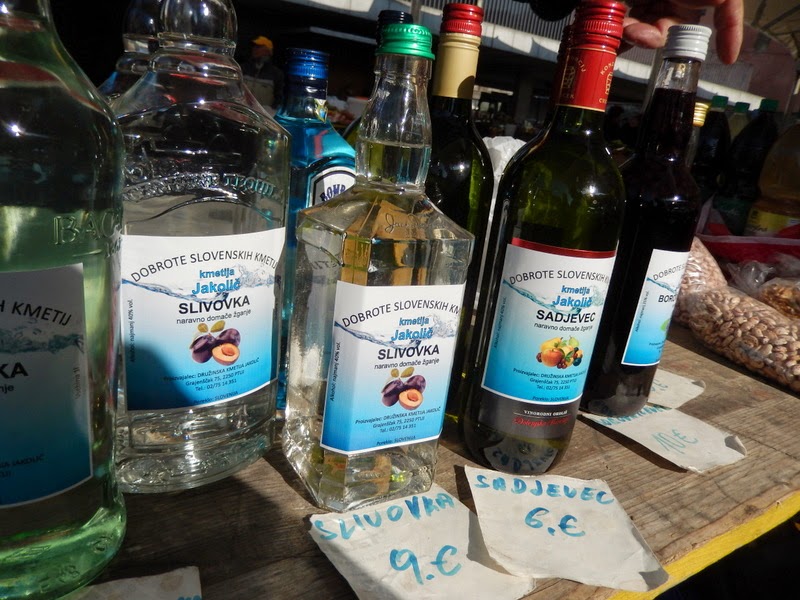