The Eternal Breakfasts of New Jersey. 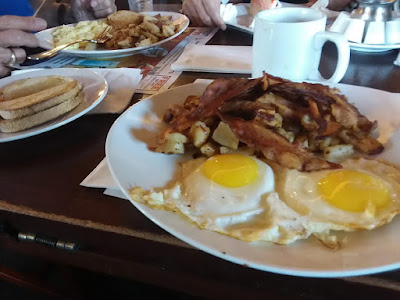 We are back home in Budapest, completely jet lagged after a visit to New York. That's a lie, actually. On this trip we spent most of our time just across the river in New Jersey, where my folks live. I am one of the few in my circle unashamed of my connection to The Garden State, although there is a lot to be ashamed about. New Jersey is like the developmentally challenged little brother of New York, a slurry of declining old factory towns, vast bedroom suburbs, tasteless shopping malls, much of it tied together by the supremely unfortunate NJ Route Four.
Designed as the main highway to the George Washington Bridge in the 1930s - when car ownership was still rare - it remains today an anachronistic death trap, an ancient, overcrowded, potholed nightmare of a road, where locals who are skilled in the tricks of navigating its abrupt exits and poorly planned interchanges erupt with road rage at the out of towners who simply wanted to cruise into New York but find themselves suddenly dropped into a mortal death race straight out of Mad Max. The world learned of Route 4 when that other icon of gross New Jerseyness, Governor Chris Christie, blocked the access to the GW Bridge in an act of political vengeance against the mayor of Fort Lee, NJ. 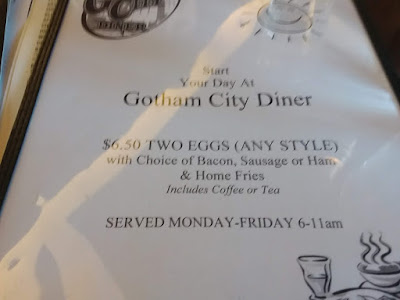 Alas... I digress. Route Four is also the road that leads to many of New Jersey's revered diners, those pavilions of 1970s design run by descendants of Greeks who immigrated from the traditional diner producing regions of Thrace and Epirus. The Jersey Diner provides comfort foods, insipid coffee, and a brief refuge for thousands of hungry retail workers and anonymous office suits who scrape a living along the tributaries of the lost river of asphalt that is Route Four. My Dad for example. The man is now 92 and still goes to work each weekday. Nothing stops him. My Dad seems to be made out of pure Bessarabian oak.

At his age my Dad has to follow a lot of dietary restrictions, but I am not sure that includes one that requires he eat a hearty diner breakfast every morning on the way to work. Still... if diner specials haven't done him in by 92, perhaps nothing will. And while we are visiting, there is nothing he likes more than to rally the kids and go out to a diner for that most classic of Jersey meals: the breakfast special.


The classic American breakfast is eggs (any style!) home fried potatoes, and either bacon or breakfast sausage, toast, coffee and orange juice. The addition of ketchup is left to the customer. The rest of the world tends towards a more balanced breakfast of coffee with bread or pastries (Europe,) spaghetti and frankfurters (Dominican republic) or macaroni soup with spam and peanut butter french toast (Hong Kong.) I've been to Greece, where breakfast consists of five cups of coffee and a pack of cigarettes, so I have never figured out how the duty of providing breakfast in America fell into the hands of immigrant Greeks, but they have done a good job of it. I will admit, I get bored of eggs for breakfast, and so, sitting at the New Heritage Diner on River Street in Hackensack, NJ, I decided to spread my wings a bit and ordered french toast, figuring I would get a modest bit of bread fried in egg, and instead of gobs of maple syrup I could just sprinkle a bit of salt on them and eat them as we do bundás kenyér in Hungary. Not a chance.


These babies sported a small mountain of strawberries and whipped cream, and yes, I did add a bit of maple syrup. And I would do it again! Finally, in an effort to find an alternative breakfast within the confines of New Jersey, my big sister and I took Dad to Istanbul Borek and Kebab, in Cliffside Park, just south of Fort Lee. Cliffside Park has become a destination for the upper classes of Istanbul to settle (while Paterson has more Turks, they are a bit folkier and more...errr... Anatolian hillbilly than the Sisli / Nisantasi crowd in Cliffside Park.) Turks take their breakfast very seriously - there is a saying in Turkish that "Lunch is for your friends, dinner is for your family, but breakfast is for you." The Istanbul Borek and Kebab is a bakery and restaurant combined, specializing in some of the best Turkish borek pastry I have found outside of Istanbul (and this includes many breakfast bureks in Berlin) but the place really comes alive on weekend mornings, when families pack in for full Turkish breakfast A.K.A kahvalti. This place is a transported a slice of Istanbul flown to New Jersey: the furniture is the real heavy wooden style you would find in a classy joint in Galata, and even the wait staff behave with the crisp, precise style that you find with professional service all over Turkey. Of course, the Turkish community paper available at the door is pointedly pro-Erdogan, but who cares when they have su borek and kazan dibi made fresh daily.

Oh, and we did have to get Dad some eggs. the waiter brought our menemen, which is a loose scramble of eggs, tomatoes, and pepper eaten with bread which caused my Dad a slight shock, but pretty soon he had composed himself and was happy to slurp it all down. Without ketchup. 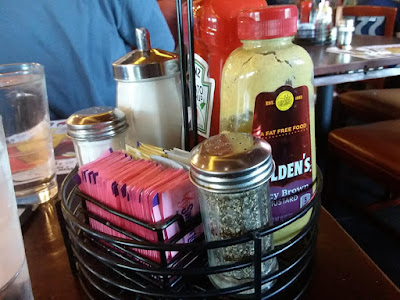