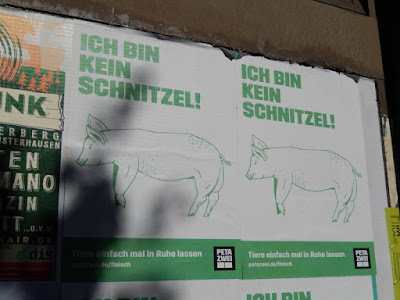 It seems like I have been running around Europe all summer. We spent a couple of weeks in Romania hunting down geriatric fiddlers in July - more on that later - and then after a brief rest it was up to Germany to take part in the Yiddish Summer Wiemar workshops - the Nazaroffs were doing a concert on August 5. I have chronicled my previous trips to the Wiemar workshops on the blog so I won't go on at length here - Alan Bern and his crew always do a fine job. I stayed at a hotel across the street from the park on the Ilm River - a stream which inspired the poet Goethe to write what may have been the only poem about fly fishing that express sentiments that can be aptly described as "sourpuss."

When touring I have been known to carry a small kit including a six piece pack fly rod and negotiate with my local agents for a fishing license when I perform. In this manner I have wet a line and taken trout in France, Finland, Slovenia, and Canada. In Germany, however, it isn't so easy to get a license to fish as a visitor: there are tests in German and registration forms and fees: one guy actually decided to document his journey into the world of  German fishing licenses.... so no, I would not be fishing in Wiemar. Instead we'll go trout fishing next week in Serbia! One advantage to Serbia: no vegans. None at all. Wiemar - many, many vegans. Serbia, here we come!

Instead... after Wiemar I was off to Berlin to witness, firsthand the most devastating examples of gentrification ever seen outside of New York. I have two favorite neighborhoods in Berlin: Prenzlauerberg and Kreuzberg. Those preferences go back to just after the fall of the Berlin wall in the early 1990s, when Prenzlauerberg was still home to thousands of grubby anarchistoid east Berliners and Kreuzberg was the heart of Berlin's Turkish community. Today both are hardcore Yuppie colonies. Kreuzberg is just barely hanging on - the Turkish community has migrated to nearby Neukolln and Wedding, but funky P-berg is but a memory of Ossie nostalgia in a sea of baby carriages and pricey Bio-supermarkets and cafes. And no Turks. For some reason, there is virtually no trave of Turkish culture in Prenzlauerberg - odd for Berlin in general, but especially odd for any neighborhood I would choose to spend time in. It is the only place in Berlin that you can't find a decent pair of circumcision undies there when you need them.

One thing about Germany - you don't really go there for the food. therre is German food, and specifically Berlin food: I haven't had the curry wurst at Konnopke's in over a decade, so I stopped underneath the elevated S Bahn tracks at Eberswalder Strasse and decided give it a nostalgic shot.

It was as bad as I remembered it. For some reason, the wurst they use in Berlin is some of the crappiest quality soft skinned meat past available - they are, after all, going to drown it in ketchup and curry powder so why invest a lot in quality. Afterwards I strolled the back areas of Prenzlauerberg and saw what else the Germans were eating. Just about every kind of ethnic food is available in Berlin, but all of it adapts to German tastes and styles: there is a piece of meat, a white starch, a and gravy. In Indian restaurants the gravy is curry colored, in Chinese restaurants the gravy is usually brown, and in "Latin American" the gravy is usually bright orange. Then there is the German idea of "Asian Wok." Germany doesn't have a lot of Chinese restaurants - most of the Asian immigrants are, in fact, either Vietnamese or Thai. Somebody once pointed out that this is probably due to the fact that China is not a destination for German sex tourism. So you have a lot of places offering a mixed cuisine advertised as "Asia Wok" or "Viet Noodles Sushi Thai Asia Wok" as if all these things were just variants of the same cuisine. They advertise vegan cuisine as well. Toss it in a wok with some sprouts and soy sauce and voila! Not for me. Head off to Neukolln for the Turkish Market, held every Tuesday and Friday near the Kottbusser Tor S bahn station.

Due to the recent attempted coup in Turkey it looks like we won't be spending much time there in the near future, so this was to be my substitute for visiting Turkey itself. the market was a lot less impressive than I had heard described: lots of vegetable sellers, sure, but also a lot of German vegan Bio-hippies selling ethno-hippie clothes and reiki spoons and bio-sandals, because, after all, where else would you go to sell such things if not a market specializing in household goods for working class Turks? Zey are so exotische! I had a yearning for some decent Turkish food - the only food there really is to eat in Germany - and we did find some decent kofte, served just as they would in Istanbul.

The place was packed with Turks: unlike doner kebab, which has become the ubiquitous German teenager fast food, kofte has to be made to order. there is no standard form to kofte: instead dozens of regional styles and variations defy categories.. It is slow food, and as such remains the realm of the hungry and homesick Turkish community. As for Berlin: maybe I have been there too much, maybe because I was there on my own schedule instead of cramming in a few hours while on tour, but it did not get me excited. I wandered around avoiding Asia Wok and seeking wifi where there was none to be found - Germans live with some of the most arcane internet rules on the planet. The Chinese and Turkish authorities have nothing on the Germans, so finding free WiFi is like finding a German fishing license - nearly impossible. but I will be back: where else can I find world class Turkish food, tattooed beer drunks, klezmer wonks, vegan bio-fanatics, and a million other unique Berliners all enjoying life as a jelly donut.