Di Nayes and Técsői Banda at the Budapest Palace of Arts: Thursday October 1

On Thursday, October 1, Di Naye Kapelye plays a concert with the Técsői Banda at the Budapest Palace of Artists. This is a pretty rare event - due to the arcane atmosphere surrounding anything involving Jewish music in Hungary, we rarely give public performances in Budapest. Our last formal concert was, I believe, in 1998. We tour all over Europe, we play for local Jewish community events (Hassidic weddings, brisses, call for special rates!) and we sometimes play the unadvertised Budapest seventh district underground club networks. We do play an occasional festival or concert gig outside of Budapest. But Budapest itself... well due to circumstances far beyond our control, is kind of off limits to us. Buy me a beer sometime and I can explain it in person. It's... Hungary... It is a surprising and convoluted tale. So this particular concert - at the grand and fancy "MuPa" - is a welcome chance to play for our home town fans and friends who otherwise only know us from our packaged digital CD selves. Yes: we actually do exist on an analog plane. 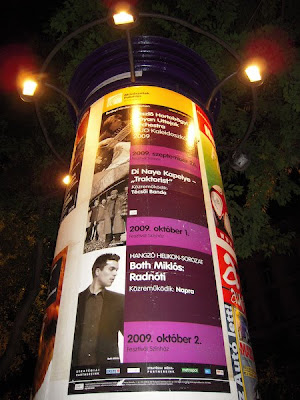 It is kind of neat to walk around town and see your face on a poster on every downtown street corner - sort of a minor rock star moment. Very minor. A little unnerving too - Budapest is not a place I want to be seen as a celebrity. Anytime I show up on some recycled TV folk music show taped a decade ago my whole neighborhood goes into ga-ga celebrity mode and suddenly i walk into the butcher shop or try and buy asparagus and I get confronted with "Mr. Artist! (yes, this is how they address you, without any sense of irony and with full celebrity awe) I saw you on the TV last night!" I cherish my local anonymity. But standing in front of paying audiences playing fiddle is what I've done my whole life. People keep asking if I get nervous playing concert halls. My usual answer is: no - stick me behind a fiddle and I am fine - but if you ask me to take the controls of a small airplane and land it after the pilot has had a heart attack, that's where I would get nervous. Playing rural Moldavian Jewish fiddle is what I do, whether in my living room or in front of six thousand screaming drunk Belgian folk music hippies (a distraction factor equivalent to playing for twenty talkative and drunk Vizhnitzer Hasids.) 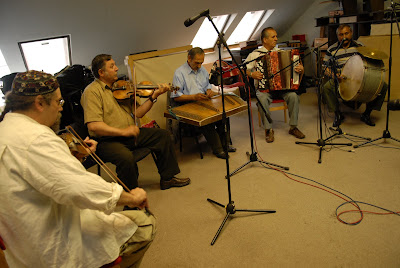 Playing with the Técsői Banda is a thrill - these are traditional musicians who still play in a context in which their music isn't "folkorized." I have to mash the two ensembles together at a rehearsal tomorrow night and fine tune the beast, but it should be noisy and ragged but right. When we recorded the newest CD, "Traktorist" I had the idea of using a couple of the Carpathian Jewish tunes that I had learned from the Técsői Banda, and then suddenly they showed up in Budapest so I took them into the old Hungarian Army Choir studios and we recorded the pieces that are used on the CD. It was the last time I played with the tsymbaly/cimbalom player Misha Csernovec, who passed away a few months later. The band has been working as a trio ever since, but will be using our cimbalom player a bit at the thursday concert. But Misha is sorely missed - he was one of the best traditional hutsul tsymbaly players, and they aren't making them like they used to any more. 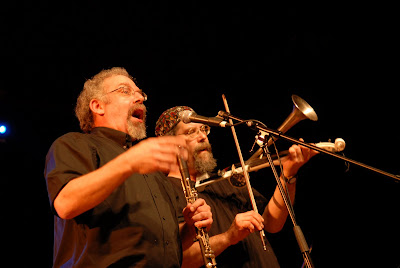 I have to run out and pick up Jack "Yankl" Falk at the airport in the morning. Yankl lives in Oregon, in the far distant USA, and when we have a major gig we fly him in. He's been busy the last two weeks - as a freelance hazan, a cantor specialized in singing Jewish liturgical music - he usually travels to sing at Jewish congregations for the high holidays of Rosh Hoshanna and Yom Kippur. This year he just finished a gig in Indiana, and in the past he conducted services for the US Naval Academy at Annapolis, Maryland: Anchors OyVey! Yom Kippur ended yesterday, so Yankl first flew back to Oregon and then hops on a plane to Budapest. I expect he's gonna be run ragged by erev shabbes. 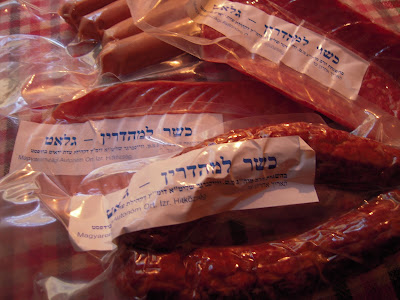 And what do you feed an observant Jew? Kosher cold cuts and sausage from the Orthodox Kosher butcher on Dob utca, of course. Having traveled all over Europe on tour with Yankl, you eventually get the knack of feeding your furry frum friends. We have made pit stops at virtually every kosher food shop in Europe during our many tours, and even fended off the dreaded "kolbász Maasai" in the town of Gouda, in Holland. (It was actually Árpi Bácsi, our 73 year old guest cimbalom player from Transylvania. The nomadic Maasai of Kenya believe that all the cattle in the world belong to them and that by raiding other tribes' cattle, they are simply reclaiming what is already rightfully theirs. Uncle Árpi felt the same way about kolbász. Any and all kolbász.)I found this little video on Youtube lately - a bit that wasn't used in the final cut of the film "The Last Kolomeyke" - me and the Técsői Banda singing Michael Alpert's song "Chernobyl" together at the Castro bar a few years ago. This was in a bar late at night. Now you can see why I never, ever allow myself or any of my band members to step onto a formal stage after having had anything to drink. It really doesn't make the musical experience noticeably better... A little bit of the film - which has aired on Hungarian TV and is actually a very well done documentary, is the cut below:
Posted by dumneazu at 2:38 PM 3 comments:

The Wonders of Fabled Nyíregyháza! 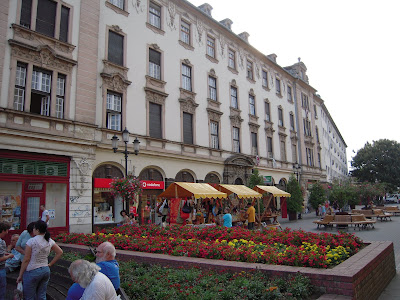 Nyíregyháza! Who has not heard that name and dreamed of one day seeing this fabled city with one's own eyes while alive on this earth? Nyíregyháza! Oh flat city of wonders, of glorious Tescos and Spar markets spreading riches to the Ukrainian border, the enobled capital of Szabolcs-Szatmár-Bereg county! Nyíregyháza! A city whose name resonates deeply among lovers of apple pie! Nyíregyháza! Nyíregyháza! Nyíregyháza! The last time I was in Nyíregyháza was around 1991, and I remembered a dusty, flat provincial burg that was famous for... apples. Yes, the eastern region of the Nyírség - "the birches" in Hungarian - is the apple producing center of Hungary, and a lovely place to drive through on your way to somewhere else. Last week we had a gig at the Vidor Festival and so it was with a smidgen of trepidation that we drove the band out to Nyíregyháza. 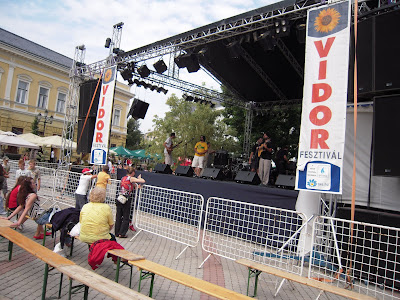 And guess what? Nyíregyháza has grown into a really beautiful and smart town. On a scale of 1 to 10 for Hungarian provincial town attractiveness (with say, Pécs or Veszprém a 10 and Szolnok a 1) Nyíregyháza rates at least an 8. If you have to choose to live in someplace that was extremely flat (if you are confined to a wheelchair, for example, or perhaps almost perished climbing Mt. Everest and are subsequently traumatized by elevation of any sort) this would definately be on the A-list of places to move to. 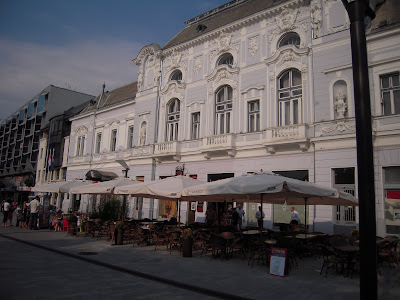 The Vidor festival was one of the best and most well organized events we have yet played in Hungary - they brought in really good World music acts like Selim Sessler from Turkey, Ba Cissoko from Guinea, and the Bollywood Brass Band from London, filled out with younger bands from Transylvania and some of the best local folk and Gypsy bands. These guys were playing in the square right outside our dressing room tent - real old fashioned local Szatmár style Gypsy band nóta music, nothing too polished, stuff you never hear in Budapest anymore. Made me wonder why we were on stage and not these guys. 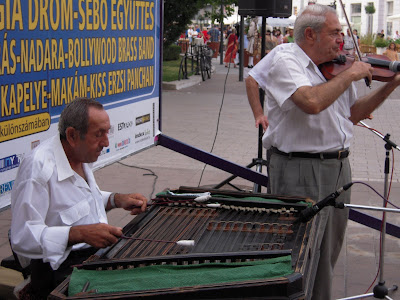 Playing at festivals means arriving early and waiting a lot - for sound checks, for accountants, for band members... you wait. They had a pretty nice spread for us, although I think the chef was pushing the BBQ chips and diet coke a bit hard, but this will be home for the next ten hours. A musicians life is best described as "hurry up and wait." 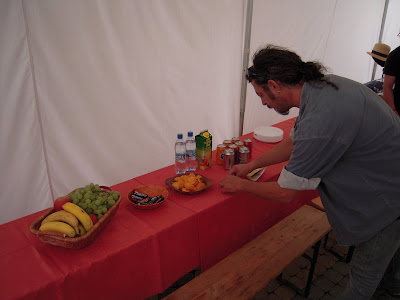 And after you have done a sound check and tuned up, and told all the new jokes you've heard since the last gig and inquired if your kontra fiddler has recently added to his already vast brood of illegitimate children, you get a bit silly and start jamming new tunes and taking the verses of beautiful Transylvanian folk songs and changing them to reflect the fact that your dressing room tent is located next to the portable toilets... this can evoke shock and moral outrage from astute Hungarian musicians. 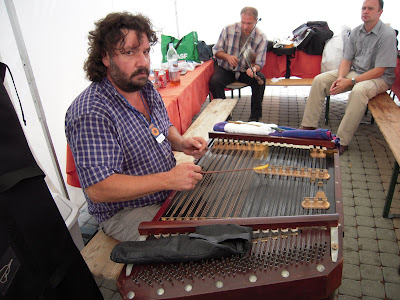 The top band for the evening was a Spanish World fusion outfit called Canteca de Macao (but I can't help thinking that they were having a play on words with Manteca de Cacao) who were a damn hot dance band and, luckily, although they juggled a lot and had dreadlocks and tattoos, were not vegetarians, since we had lunch with them and lunch was some fine beef goulash. Thus they redeemed themselves from my harsh and shallow judgement. It's OK to be a hippie if you eat meat. 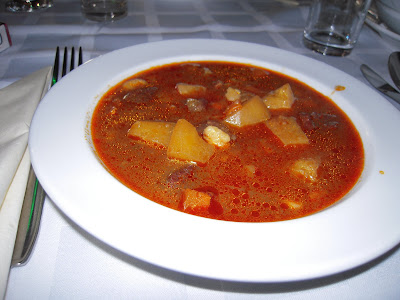 This is the stuff you never get in Budapest: real, honest hard core granny gulyás. As soon as you get 25 kilometers out of Budapest the food always starts getting better. It makes it hard when working on travel guide books and trying to recommend Budapest restaurants (only twice the price for half the portion!) 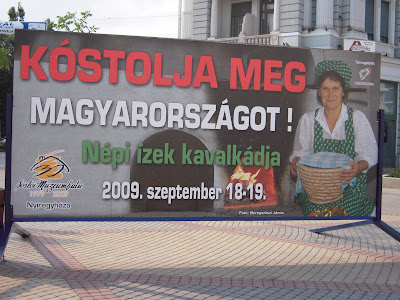 Another feature of Hungarian provincial towns is the local fast food: lángos and lapcsánka , which is essentially a potato latke, a flat fried starchy filling spud pancake. It's getting harder to find good lángos on the street in Budapest - heck, you won't even find it on the streets in Budapest anymore, regardless of what I write in tourist guidebooks because my editors want me to say so ("lángos is widely popular as a street food in Budapest..." NOT!) But get out to the countryside (Miskolc, in particular) and you still find cheap fried spud bread kiosks all over town. 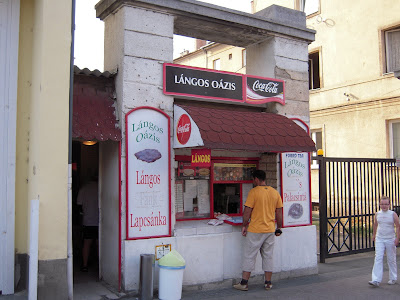 Nyíregyháza used to be home to a large Jewish population, both orthodox Hasidic and Status Quo Ante traditional Ashkenazic congregations. Today there are about 300 Jews living in the town, and we met the president of the community but had no free time to visit the synagogue. The Nadvorna Hasidim make a pilgrimage to Nyíregyháza annually to visit the grave of one of their most influential rebbes, and not far away is the small town of Nagykálló, the home of the Kaliver Hasidim. Since this are is right up against the Ukrainian border, there was a lot of interaction between the Jews here and those in Munkács, today in the western Ukraine. And since we are next playing at the Művészetek Palotája on October 1 with the Técső Banda, who often play for the Jewish communities around Munkács, what could be better than a full set of Hutsul tunes played by them last week in Budapest at the Kertem garden bar in the City Park. This is a really fine take - Yura's singing and drum playing really put him in a category above most "folk" musicians. These guys are playing traditional music at their prime - it is almost like hearing blues played in Missisippi in 1932, or Klezmer in Lviv in 1910. It's a changing world, and we need to be grateful for musical holdouts like this. There won't be many more like them in the future.
Posted by dumneazu at 8:40 AM 8 comments: