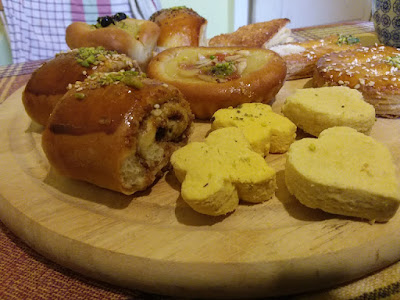 You may have heard a lot about how Hungary is hostile to immigrants, and how badly refugees are treated (declared by the government to be "migrants" and not "refugees" because, hey, linguistics, how do they work?) Hungary wasn't always that way, and even today - perhaps in contrast to the rest of the country - Budapest is still a place where you can see a number of cultures contributing to the whole of city life. Not on a scale that you might see elsewhere in Europe - a topic that causes Hungarian politicians no end of anxiety. Nutcase right wing Hungarian politicos regularly buy up ad space (on Government owned media of course!) declaring urban Hell-holes like Brussels, Vienna, or Manchester to be racial war zones waiting to infect pure, innocent, white Hungary. Living in Budapest's 7th district - the historical Jewish ghetto - I'm happy with the international atmosphere we have here in the 7th. It is sort of like an island of tolerance and cultural sanity - by day at least. (At night it becomes one of the world's worst hypertourism zones.) The 7th (and the 8th... and most of Budapest) has always had a healthy multicultural vibe - I like living near felaful stands, Turkish butchers, pho shops, and Indian groceries. And most of all, I like the Iran Cukrászda , a Persian pastry bakery  that opened in December on Nagydiófa utca 30-32.


Apparently, I am not alone in my admiration for the Iran cukrászda - just about every Magyar foodie blog (and there are a lot of them) has discovered this tiny hole in the wall on one of the less traveled side streets of the Ghetto. We were in the USA over the winter, so when we finally discovered this place - dangerously located about four minutes walk from our flat and open from 8am to 10pm)  - we thought it was simply another baklava baker. Wrong (but they do have excellent baklava. Stuffed with pistachios!)


Fumie began to systematically try out the cookies. Apparently these are typical pasties from the Azeri region of Northwest Iran, typical of what would be sold in Tehran as well, made by a family whose son was a student here - and the father is a master baker. These are flakier, crispier and chewier than other cookies. Many are only half as sweet or not sweet at all, and some are delicately flavored with spices unlike those used in western style baking: cardamom, saffron and ginger.

Personal favorites include: the walnut filled cake rolls.... or the barely sweet flaky biscuits with pistachio on top.... and the soft coconut cookies. also the chickpea flour cookies .... there is no way to choose, so the best option is to buy an assortment: the guy behind the counter speaks English as well and can help you choose. Best of all, these are not expensive, even compared to other local bakeries: you can fill a box assortment for the price of a sandwich. 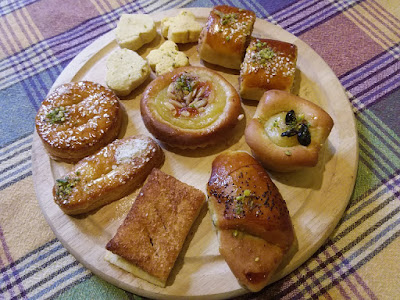