I know that this is something of a blog record for not posting (since November!) but I have a perfectly lame excuse: the covid pandemic! For a year now there has been no travels, adventures, visitors, or even trout. Covid has put the kabosh on all of that. We've all been living through it, surviving as best we can. We retreat into ourselves. We become boring. Basically... we make lunch.

Given my age and my less than perfect physical state I'm a prime target for the Covid-19 virus. Those little corona spikes were virtually designed for me! A few of those not-quite-living critters may be floating around in a droplet of sneeze juice and if they see me they just go weak at the knees and want to use my biological real estate to replicate their little strands of DNA... and I am not going to give the little spikey bastids any easy advantages. At least not here, on my home ground. Hungary managed to pull together during the first two waves of the virus, shutting down the borders and enforcing curfews and limiting meetings. The situation was admirable until the third wave hit late last fall, and since then Hungary topped the list for the world's highest death rate for covid patients. Hospitals were not a good place to be: remember the ad slogan for Raid Ant and Cockroach Hotel traps? They check in, but they don't check out... Things have gotten better recently, but the best advice I can share for aging Jewish fiddlers in Hungary is to simply do not get sick.

On the other hand, Hungary has one of the world's most successful vaccination programs - all kinds of vaccines were purchased and distributed, from Pfizer, Moderna and AZ down to a few that seem to have been tossed into the delivery bag alongside the Szechuan spicy pork and shrimp rolls. And - a remarkable feat of Hungarian beauracracy - I have still not managed to get vaccinated, even though I have registered and pestered local doctors and followed every rumor and lead I can. Only the Government - not private clinics - can distribute vaccines and decide who gets them. Rumor from the embassies is that foreigners and other folks lacking Hungarian social security numbers will be able to get our shots at the end of this month. (They said the same thing last month, but heck... we're keeping our fingers crossed. In Central Europe, as we all know, official spokesmen never lie!)

So we keep to ourselves, maintaining a rigid social isolation that means we rarely go out except to do our shopping or ride bicycles for exercise, we avoid crowds, we don't eat out, and since the relaxing of mask rules in Hungary and much of Europe, we still keep our masks on in public. And that makes for pretty boring blog subjects. What we actually do is... spend a lot of time preparing intricate meals. Of fish, preferably.

Early this spring a fish seller appeared at our local Klauzal ter market offering something we hadn't seen in a long, long time: fresh fish. Let me qualify that: fresh good fish at a very affordable price. He displayed the usual carp and bullhead, but also fresh dorado, branzino, salmon, and even haddock - my favorite North Atlantic fish. Fresh tuna. Smoked tuna - and salmon, both of which he expertly smoked himself. He also offered fresh shrimp, scallops, and sardines. Once we became regular customers he even offered us each a free oyster. I took it home, popped the shell, and immediately wanted to sell my vintage 1934 Gibson mandolin and buy more oysters.

Until now we could get fish in Hungary, but only if that fish is carp or any of its lesser, bonier, and more garbage oriented smaller relatives  known collectively in the English language as "trash fish." We can also get catfish: either the traditional harcsa, European Wels catfish which grows as big as Volkswagens on the muddy bottoms of whatever industrial trough passes for as river in these parts: or the "African catfish" which is a fishlike product artificially cloned by Tesco and other supermarket chains for its ability to resemble fish. There is also törpeharcsa "dwarf catfish" which is the American brown bullhead. It is a fine eating fish in its native North American waters - kind of like a KFC chicken leg that swims - but in Hungary it is a thumb sized pest with sharp spikey fins that clogs waters and is mainly boiled into a fishy sludge as a base for a fish soup. I'll pass.

As a general rule, Hungarians do not like ocean fish. Compared to the more familiar freshwater carp the meat of sea fish seems hard and dry and lacks the sharp Y-shaped carp bones that Hungarians have grown to love in their fishermen's soup (prepared in a stock of spicy paprika and pulverized bullhead sludge.) When Hungarians do eat oceanic fish it is usually in the form of hekk - frozen whole Norwegian hake served as a snack fried at  beaches and riverside snack bars.

Hekk isn't the worst thing: it originates in an ocean, albeit one far, far away. It is usually served at snack bars at beaches located on lakes because in Hungary it naturally occurs frozen and then battered and deep fried and served next to soggy French fries with a pickle. It is a boney fish, but mainly it has one huge mega-bone running all along its body so you don't have much to fear. That's basically the non-carp repertoire of Hungarian seafood dishes. But hekk does satisfy an urge for  beach resort fish and chips if you are drunk and don't want ice cream for lunch.

Recently some ocean fish, primarily the Mediterranean Sea Bream (dorado) and Sea Bass (branzino) have become widely available in some local supermarket chains. Hungarians are familiar with these fish due to the popularity of the Croatian coast - particularly the city of Zadar - as a magnet for Magyar holiday goers every summer. Needless to say, no fishermen are involved, since these two species are both artificially spawned in aquaculture farms. Which is to say they are cheap. The problem is that they are never really fresh. They are refrigerated, for sure, but only in the same sense that Ötzi the Ice Man was kept fresh atop an Alpine glacier. Looking at the eyes of a fish  - or of a frozen ice age hunter - should usually tell if they are fresh or not.

I know fresh fish. I was raised in New York, and lived many years in Boston, so I have always expected my fish to be fresh and - ahem - from an ocean. I often traipse down to the water to catch and kill them myself. (But not trout or grayling.) My wife is from Tokyo and knows fish better than me, and in fact she believes all the fish in the entire planet personally belong to her. And yet we choose to live in a landlocked nation where people eat carp bones and bullhead sludge. So yes, when a new fishmonger appeared at the market across the street from us we did react like Evangelicals meeting Jesus in the parking lot of  a suburban Walmart. We crapped our pants. We were happy. For a few months...

"Things fall apart; the centre cannot hold / Mere Anarchy is loosed upon the world." William Butler Yeats really knew how to describe the feeling when you walk into a market hall on a Thursday morning expecting to find you fish seller and he is not there. We did what any fish eating cosmopolitan covid stranded in a landlocked country would do: panic. We asked the neighboring vegetable seller if she had any news of the phantom fishmonger. "He's gone. Don't expect him back." NO! No! No! This would not do... I searched out the market manager and got a cagey "The fish seller? He's on vacation... for a while..." We are devastated. Our world has collapsed. I spent the last week in virtual vegetarian penance praying for the return of fresh fish at our market. We have our fingers crossed, though. Come back, fish guy... come back! 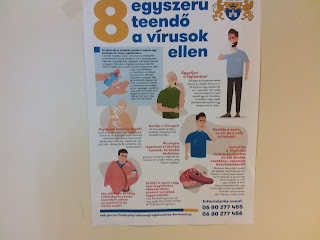 As you can guess, I haven't updated the blog in a half a year, and I needed an excuse to post all these pictures of delicious fish. As soon as we get vaxxed and get our vaccine passports and things seems safe enough to get out and around more, I will start updating more frequently. But the sad truth is... not a heck of a lot is happening around here lately, at least in our balliwick.
Posted by dumneazu at 5:47 AM 4 comments: