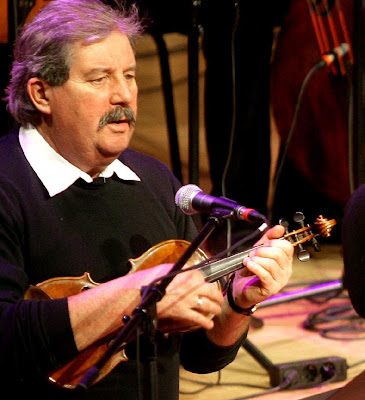 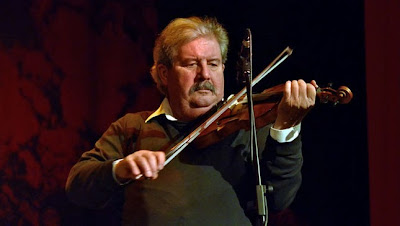 He played a dance in Budapest like he belonged in a village in the Mezőség. He was a good teacher, a good man. We will miss him, but we will feel his influence for many, many years to come whenever a fiddle comes out of a case, and a Hungarian tune comes out of a fiddle. Nyugodj békében Béla!
Posted by dumneazu at 12:52 PM 3 comments:

The 2013 Smithsonian Folklife Festival just ended, and I was proud to have been a participant in the Hungarian focus area of the festival, representing Jewish folk music traditions from Hungary. I often balk at labeling what I do as "Klezmer" but then again... that is what people expect of Ashkenazic traditional music, so Klezmer they got. I didn't have my own band - Di Naye Kapelye - there with me, but I worked out a couple of sets with Pal Istvan "Szalonna" (the word means 'bacon' - Istvan's nickname. Jewish music always goes better with bacon!) and his band, who are as perfect a Hungarian folk band as it can get. Szalonna comes from the Karpatalja / West Ukraine town of Visk, and so he is a natural master of the style of music played in the Szatmar region, so I chose a repertoire leaning heavy on the Satmar and Vizhnitz Hasidic traditions, which borrow a lot of motifs from the local Hungarian folk styles and allowed the members of Szalonna's band - including the fearsome cimbalom virtuoso Sandor Urmos - to really settle into the tunes and let loose with some great solos and ensemble improv. We did a few side gigs: played the Kennedy Center on July 4th and did the Katzen Arts Center as a special concert for the Hungarian Embassy. We even got to meet Hungary's ambassador to the USA, György Szapáry. He's the well dressed chap standing next to me in the photo below.  A gig is a gig, though, and this one meant that we were missing dinner. Thanks to Festival Transport manager /driver Andrew Bautista, a half hour after this pic was taken we were all chowing down on Five Guys hamburgers. Does life get better? And while I couldn't have my whole band there, Jake Shulman-Ment was on hand to help out - a satellite member of Di Nayes and - now that he lives in the USA - a key member of the An-ski Ensemble which was representing Yiddish music in the Endangered Languages focus of the Festival. After the first days the hundred or so Hungarians who took part in the Folklife Festival all became something of a small community. The Csontos family from Karcag in the Kun region of the Hungarian plains demonstrated their award winning sheep goulash every other day, and while visitors could not taste any of the traditional foods prepared (due to strict rules by the National Park Service which controls the National Mall in DC) we particpants would wait behind the stage to wolf the sheep stew down. If you missed the goulash, there was always something from Kollar Ilona Neni and Bepe from the Voivodina town of Kishegyes. Ilona neni is a master of both Bacska cuisine and of salty ways to describe the searing, muggy DC heat (usually involving bits of dog anatomy.) The food demonstrations were probably the most popular event - it drew crowds of people lusting for a forbidden taste of paprika cake, puliszka with cheese, or slambuc, Hungary's answer to lasagna. Since most of the Hungarians chose not to take the evening dinner catered by our Hotel (in order to save by pocketing the per diem instead) this was also the area where everybody in the Magyar contingent hovered about waiting to eat "normal" Hungarian food, albeit food prepared by some of the best regional cooks in the Carpathian basin.) Personally, I think Transylvanian cheese puliszka is the perfect food for a hot summer day. Thanks Tekla! While the main Danubius stage featured folk dance ensembles performing very un-Smithsonian folk dance choreographies while wearing layers of embroidered wool in the DC heat, there was a lot of music happening all across the Hungarian Heritage area. Anthropologist Mary Taylor managed the Heritage tent with an almost supernatural sense of 'cool' through the chaos of schedule changes and self-destructing bass strings. You couldn't tune up without drawing a crowd. Several of Hungary's best duda bagpipe players were on hand, but we definitely missed having Ferenc Tobak there - he lives in Fort Bragg, California and is, beyond a doubt, America's best maker and player of the Hungarian Duda, and has beena major force in keeping Hungarian heritage alive in the USA since he moved here in the early 1990s (right after making me a duda which I still have, although - in a gesture of mercy to my apartment neighbors in Zuglo - I haven't actively played bagpipe in years.) The best part of the festival was what visitors didn't see: the after parties at our Hotel in Arlington, Virginia. I post more on that very soon. 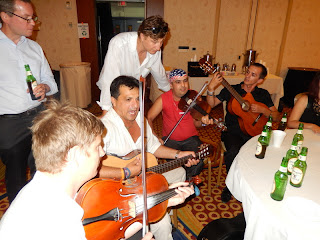