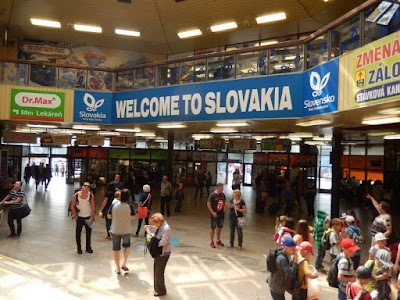 Slovakia has an image problem.  Most people will only recognize Slovakia as the tail end of a once feisty Czechoslovakia, a place they may have only read about in history classes. A  post WWI result of the dismembered Hapsburg Empire, Czechoslovakia was a shotgun marriage of hardworking, intellectually inclined Czechs, largely rural Slovak peasants, and largely beleaguered German, Hungarian, Roma and Rusyn minorities. It was raped by Nazi Germany before becoming the bleakest grey zone in the Soviet Bloc. In 1990 Slovakia chose independence, and tiny Bratislava became a federal capital city.

They called it the Velvet divorce, but for the Czech Republic it was like finally watching your hillbilly cousin move out of Mom’s basement and back to Tennessee. For the first ten years of independence Slovakia was governed by a cabal of ex-communist shitbirds led by the frantically corrupt Vladimir Meciar, who turned Slovakia’s ex-communist security forces into the Russian Mafia version of the Keystone Cops: their specialty was kidnapping and drugging opposing politicians and dropping them off across the Austrian border without their pants. Meciar was finally ousted from office in 1999, and a new generation of young yuppie technocrats, educated in the west, rapidly reformed Slovakia from corrupt ex-commie shithole into their idea of heaven: a low tax business park with plenty of free parking, retail space, and high-end gourmet coffee roasters where once shepherds roamed with their flocks.

Last week we went to check out the Slovakia Food Festival held in Bratislava Castle. Actually, Fumie went to do a story on it, and I went to go fishing on the Revuca, a stream near Ruzemeberok. We do this quite a lot: enjoy the wildly affordable capital city and then take the train out to the Fatra mountains to fly fish for trout and grayling in the high mountain streams.

From a food stand point this works out well: the Liptov region is famous for its regional mountain cuisine. Basically, everything is white and covered with cheese. And bacon. It is amazing what the Slovaks have been able to accomplish given these parameters. Stuffed dumplings, dumplings in soup, dumplings in cheese, in sourkraut, ravioli with cheese, even potato starch and milk soup. If it is white, it is ready for dinner.

A lot of the dishes, such as the national gnocchi and cheese variant halusky – are based on potato dumplings, sour cream, and curd cheese: white on white on white. Unless you pile some ham hock or stew on top of it the dish defies photography. Most Slovak eateries offer some dishes that reflect their former marriage to the Czechs: bread dumplings with stewed red cabbage and and roast pork is widely available, as are the Czech versions of goulash - a beef stew chimera of the Austrian goulash. If you want Hungarians style goulash you have to find what the Slovaks call "Szeged Goulash."


Before the adoption of the North American potato these mountains were more sparsely settled – indeed, in the 18th century a famine caused thousands of Slovaks to migrate south to Hungary and Serbia. The lowly spud made all the demographic difference to life in the mountains. Of course, pigs helped. Slovaks love bacon. Possibly even more than Hungarians, based on how many things they can sprinkle fried bacon bits over. All halusky dishes come with freshly fried cubes of bacon, and then a splash of grease. And most menus offer the option of extra bacon if you feel the need.

The Bratislava Food Festival, was refreshing after a round of similar festivals here in Hungary. Budapest held its annual food festival in Buda at the Millenaris Center last weekend as well. The entry fee was FT 3500 just to get in, and the participants were mainly the catering industry and the top end restaurants showing off what they can do with a panini press and a grill in the pissing rain. And as usual: its a Hungarian event, so there is virtually no foreign participation. Hungarian chefs will show off their skill with sushi, or hamburgers, or pad thai, or paella. Elsewhere, we can expect that foreign chefs in their own lands are busy fucking up gulyás, székely kaposzta and csabai kolbász.

The Slovak Food Festival, on the other hand, was not only a free-entrance event but also fully regional: Hungarians were there selling wines and palinkas, Czechs were plugging whatever bland pastel slop it is that Czechs eat, and even some Gorales from the Polish highlands across the border were there pushing smoked cheese. ("Its a primitive survival food, but now its a high-end artisanal primitive survival food!") We met a surprising amount of males who were able to speak a bit of Hungarian but who were not themselves Hungarian, which is a stark testimony to the amount of effort spent on getting a Hungarian girl to go out with you in High School.

One family catering business specialized in large scale goose and duck liver imported from Hungary, which, they proudly announced was the best quality and entirely up to European BIO standards. Walk by their stand and they would dip a slice of bread into the hot goose fat in which they were frying the livers and hand it to you. Can't afford the fois? The gras is entirely on the house! So why can't we get more goose meat in Hungary? Where does all the goose meat go after the evil scientists have extracted the fattened livers and shipped them to off to France? Duck used to be as common in Hungarian villages as chicken... and now it is expensive and most is exported to Germany.) And what about duck as a fast food option? Kentucky Fried Duck anyone?  Maybe with palacsinta pancakes filled with cheese? Is this blintz enough for you?

And why not sell fried potato pancakes at the same stand? This little cart would do some serious business parked in Jewish neighborhoods in New York, people. These were some serious latkes - crispy, crunchy, and strangely not greasy and yet defiantly unhealthy. Yes, if we eat them we will die. But then again: even if we don't eat them, we will die. Life is funny that way. 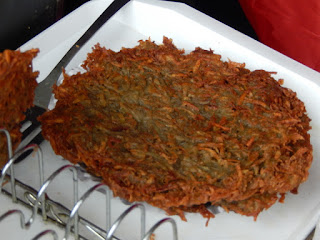