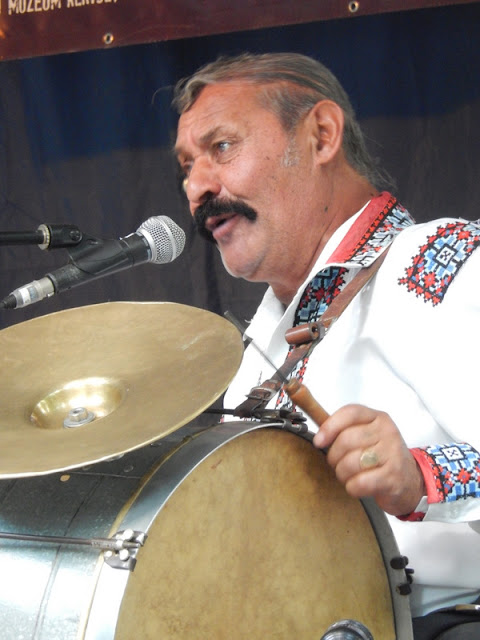 Yura Chernavets, my good friend passed away this month at his home in Tyachiv, Ukraine at age of 69. Yuri was the drummer, singer, and plonka player from the Manyo band (known in Hungary as the Técsői Banda) and he was - without any shadow of doubt or danger of hyperbole - the best damn traditional drummer in European folk music, a natural talent who developed a an amazing level of expressiveness and virtuosity on an instrument that is usually considered an afterthought. 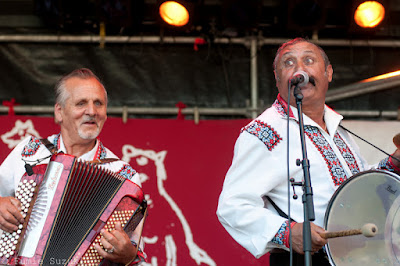 Yura was a member of the traditional folk band known in the Ukraine as Manyo, consisting of the sons of the Hutsul fiddler Manyo Chernavets, based in the small town of Tyachiv in the western Ukraine, just across the Tisa river from the Maramures region of Romania. Manyo play a mix of native Hutsul / Ruthenian music, a heady mixture of Ukrainian, Romanian, Hungarian, and Gypsy music with a healthy dose of Russian and Jewish songs thrown in for good measure. I met them around 2000 when record producer Ferenc Kiss and Imre Keszthelyi began to tour them around Hungary, showcasing their multiethnic repertoire.


When I heard them play a medley of Carpathian Jewish dance tunes I arranged to visit them at Imre's sprawling 8th district flat, where they usually stayed in Budapest, with Australian cimbalom player Tim Meyen and fiddler Pip Thompson. We ended up recording a huge amount of music, much of it Jewish, but the day cemented a personal relationship that grew over the years. During that afternoon we were warned to keep the music down so that the neighbors wouldn't complain: this is Ivan on fiddle and Yura playing on furniture, and you can see the artistry coming through, as well as a few of his dance moves.

I had intended to include some of their tunes on Di Naye Kapelye's third CD for Oriente Records (Traktorist) but had to contend with post touring and studio exhaustion from my own musicians, when the Manyo band suddenly showed up in Budapest. So I simply invited them into the studio to do the songs with me, as well as Michael Alpert's rendition of the traditional tune "Hu Tsa Tsa" sung about the Chernobyl nuclear disaster. At the time the band was involved in making Hungarian documentary which became "The Last Kolomeyke" (whole film on Youtube)  That film, sadly, became the story of the loss of their brother Mishka, the cimbalom player, but I allowed the film crew in to the studio to record the session and later we did a live gig at the old Castro Bistro in Budapest.

In the clip from that film you can hear - but not see - one the of Yuri's amazing talents: he was a master of the plonka, The plonka is a small bit of film - from a slide or an e-ray - held in the mouth and blown as a reed for effect during dances, tweeting like a bird, trilling like screeching brakes, or - for a talented few like Yuri - playing melodies like a crazed oboist on meth. Some of my fondest memories of Yuri are when I went with the band to New York for the Black Sea Roma Festival sponsored by New York city's Center For Traditional Music and Dance in 2010. For the first few days we stayed at my sister Pam's house in New Jersey, where we invited the cream of the New York klezmer scene - Michael Alpert, Sruli Dresdener, Zach Meyer, and Pete Rushevsky among others -  for a BBQ and jammed until the police advised to stop.

Later, the Center for Traditional Music and Dance sponsored a dance party at the Ukrainian Home restaurant on 2nd Ave in the East Village, giving the band the distinct impression that much of New York was inhabited by Ukrainians. While we were in New York ethnomusicologist Shaun Williams - who was teaching English in the Ukraine at the time and studying Hutsul traditional music - served as cimbalom player and translator, and basically, cultural advisor to the band ("no, they don't shoot the chipmunks and eat them here... yes, the coffee samples at Starbucks are for free...") While we were all shopping for fiddle strings at DiBella music in Bergenfield, Shaun pointed out that that Yuri had fallen in love with a three wheeled motorcycle parked behind. 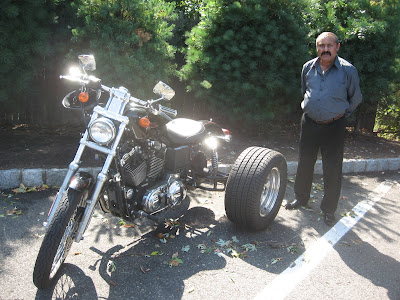 Yuri Chernavets was a lot more than just a folk musician - he was a world class musician and many promoters and producers who heard him live were quick to say so. A couple of years ago I was contacted that a producer in England had seen some of my video clips and wanted to record the band... and it was one of the members of PiL. Another musician wrote to me from Japan asking about Yura and his drum style. For Klezmer musicians, who play the Carpathian poik drum, Yuri was one of the only practitioners of poik who really had a mastery above mediocre levels.


Traditional musicians like Yura and his brother Joshka of the Manyo band are one of the reasons I continue to live in this part of the world. They are still here. I am still here. Something bigger than us is still here. Tradition doesn't just mean preserving the past. Tradition is a way of protecting the future. It is a way of giving something that you can't quantify with a price, something you can only have if you work for it, but you can never own it. Yura was a person who worked for everything he had, and shared with everyone he met. We are all better for knowing him,  we will miss him, and Heaven will now be a much livelier and noisier place. 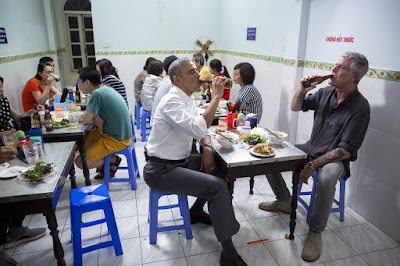 Back in the early days of blogging, before twitter and instagram and snapchat I wrote a post "Anthony Bourdain does Romania: National Scandal Ensues" which remains the single most visited page on this blog. Last Friday afternoon Fumie looked up from her tablet and quietly announced "Anthony Bourdain has died." The news that the host of CNN Parts Unknown had taken his own life in an Alsatian hotel was, perhaps, the only time a celebrity obit ever shocked me. I don't put much emotional value in celebrity passings, but Bourdain was in a different category. He may have had the most popular show on CNN, but he was no celebrity. He may have been the most recognized kitchen worker on TV, but he would be the first to reject the label celebrity chef. Bourdain was a normal guy... maybe hyper-normal. He was... a mensch. It is a type we know well in New Jersey... raised in the 1970s within walking distance of the George Washington Bridge, close enough to New York to catch the late shows at CBGB's but far enough to lack any street cred. It is a kind of massive chip to carry on your shoulder, and Bourdain carried it with a vengeance. In the suburbs either you got a Phd or you became a line cook. All my friends got Phds. I got a job as a garbage man for the Hackensack Sanitation Department. (My brother became a line cook. My sister, however, is a doctor.) So when I watched or read Anthony Bourdain's stuff, it felt awfully close to home. You could almost smell the Meadowlands stench on it, just aching to get to the toll booth at the GW Bridge and cross those rusting steel beams to the city of dreams. 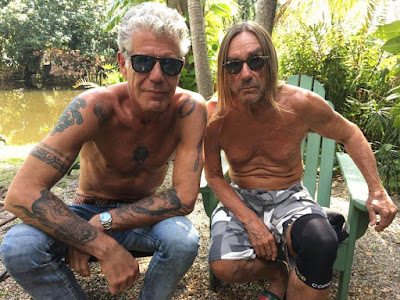 Bourdain was raised in Leonia, NJ, about three miles from where I lived in Teaneck when I went to High School. We were both born in the same year. His local new Jersey hot dog stand was Hiram's in Fort Lee - ours was Callahan's, across the street. We both hung out at the Culinary Institute of America in Poughkeepsie NY at the same time in the 1970s with about the same amount of commitment. At least I was not enrolled - I played blues fiddle with the near legendary Chops McCoy's band in the CIA pub on weekends. I can't claim to have ever really met Bourdain, but I remember Chops once taking me off campus to buy a baggie of pot from a dodgy off campus guy who may well have been Bourdain - all I remember is that the guy was an asshole and the pot was... as Chops McCoy put  it "You don't smoke it, you season lamb with it."  Bourdain also partook of one major dirty, delicious secret that I am also guilty of: Popeye's fried chicken. 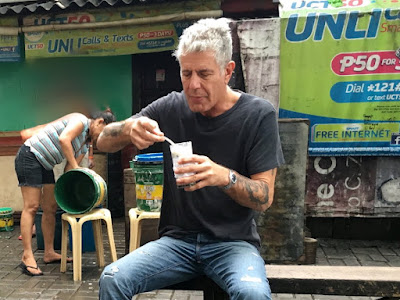 Bourdain was a competent chef - his specialty at Les Halles in New York was the bog standard French steak frites - but his real talent was storytelling. Bourdain loved food, but his real skill was describing the people who made it, from producers to dishwashers to chefs. Bourdain had no fear of words, no writer's block, and a knack for that wry twist that only comes from somebody who has puked tequila and beer at a Ramones gig. (As such he was a story editor's dream.)  He read widely and idolized  William S. Boroughs, Hunter Thompson, George Orwell, and Joan Didion among others. He read with an editor's eye, but he wrote as if he were talking to a table full of close friends at an after hours bar. At the age of 44, an article he had written "Don't Eat before Reading This" made it to The New Yorker, and from there to a publisher who reworked it as Kitchen Confidential. My brother - who has never held any job in his life that did not require holding an onion in one hand and a knife in the other - posted this on Facebook: "Before that book I could tell people what I did for a living and it was as if I was speaking in tongues. After "Confidential" people knew what we did and they respected it. I always wanted to thank Anthony for that. He made being what I was when I woke up, and what I was when passed out and absolutely everything between acceptable, even desirable." 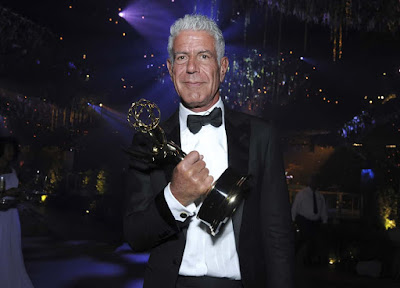 Kitchen Confidential led to a successful career on television. Bourdain's style was unique - he didn't conform to the stereotypes expected by the Food Network or the Travel Channel, he smoked, he drank, he had opinions, he told stories of his drug days, and occasionally rolled one up and inhaled on camera. Some shows worked, some did not (Romania stands out in this regard.) but the viewer always knew that Bourdain was trying to show something honest and real: Truth in television rarely intrudes on travel or food shows. He eventually came to roost at staid CNN with Parts Unknown at a time when, in hindsight, we needed him the most. Anthony Bourdain taught Americans that they did not have to be afraid of the world. Sitting with iranian families sharing a meal, talking to regular folk in Gaza, knocking back a beer with Obama at a bun cha stand in Hanoi, or chowing down on greasy megashnitzels at Budapest's obscure and beautifully grungy Pleh Csarda, Anthony Bourdain showed the world that there actually were Americans who were not assholes. He used his airtime to describe the lives of normal people in places like Gaza, Laos, Armenia, and Beirut to Americans and others who, like him, did not want to be assholes. At a time when the United States of America is identified with one of the most repulsive assholes to ever hold public office, Anthony Bourdain presented an hour each week of tolerance, decency, and a willingness to listen to and learn from people not like himself. Anthony Bourdain touched a lot of people, and will be sorely missed. We needed that hour each week of learning to not fear people. Now more than ever. Now more than ever.

In Memoriam: Anthony Bourdain visits my home town, the Bronx: