For those of you still dependant on the Gregorian Calendar, I would like to wish you all a belated Merry Christmas and a Happy New Year, or as we say in Hungary, BUÉK! Hungarians love abbreviations, and BUÉK stands in for "Boldog új évet kívánok" a clattering shower of Uralic syllables meaning "I wish you a Happy New Year." The Holiday season in Hungary is a bit different that the one we are accustomed to in the English speaking world (or the Prime Fringe Universe, if you wish.)  For one thing, Santa Claus comes on Dec. 6, but it is the baby Jesus Himself who puts out the children's gifts on the morning of Dec. 25. The traditional Christmas roast turkey is replaced by the traditional Hungarian carp soup and slices of beigli, a dense poppy seed or nut roll cake that is related to a bagel on only the most distant verbal terms. Don't like carp soup? Too bad. You are going to eat carp soup.

Not only do Magyars love carp, they like it as fresh as possible, so they stand in line at outdoor markets waiting for the live carp trucks to deliver the swimming, living goods. You can buy it filleted, but why not take it home and let it swim around in the bathtub for a bit? As you can guess, at our house we are not big fans of carp. there are other fish available, such as these small sterlets (mini sturgeons) and farm raised trout swimming around in some murky tank. I am a trout fisherman. A fly fisherman at that. Tie my own flies and everything. Seeing a trout in a fish tank carousing with sterlets... is scandalous. I would rather eat a sardine.


And you know all those public safety alerts that warn you to avoid Christmas tree fires during this season? Hungarians put real candles – burning candles - and firework sparklers in the branches of their very real fir trees. As far as I know, their trees never erupt into flame. And mind you, when they do this they are drunk. Either they are such skilled pryrotechnicians that they can avoid catastrophic fires while drunk or else our public safety officials have been lying to us about putting candles in trees.


What Hungarians do really well is shopping. Christmas markets pop up all over the place, offering the usual low to mid end offerings of scarves, bags, CDs, crafts and folksy kitsch to make your holiday giving so much easier this year. And of course, there is always a lesson to be learned, although sometimes we are not sure what. The Budapest Police - always a bunch of fun loving, creative guys - had this tableau set up in the middle of the Moszkva tér (oopsie! Széll Kálmán tér!) Christmas market.


Apparently, the boys in blue (grey, actually) want you to avoid drunk driving, or perhaps they are hoping to get a wrecked car for Christmas, or else they just didn't have any place to park this. I'm sure they had something they wished to communicate. It seemed like such a good idea at the time. The important thing is that they were thinking. They were alive and cognizant, reason enough to celebrate, no? The Budapest Police have always had a bit of a communication problem. All around are more traditional gift ideas. 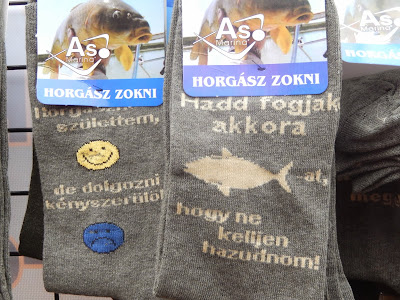 Fishing socks! Why have I never owned a pair of these? Everywhere I turn there is some new discovery! The Moszkva tér book kiosk - once the main distribution center of democratic underground samizdat literature during the late communist era - now specializes in right wing crap. Don’t like the cards you were dealt by history? Choose from a broad spectrum of right wing and reactionary Hungarian literature! We’ll find convoluted explanations and name conspiracies and enemies you never even dreamed about! And it is an election year! Don't let a little lack of historical relativism ruin it for you!

OK. that is Moszkva (er.., Széll Kálmán) square. Which is a huge metro station. Let's take the old red metro across to Pest and see what is happening in the downtown.Pest Christmas market at Deak ter! 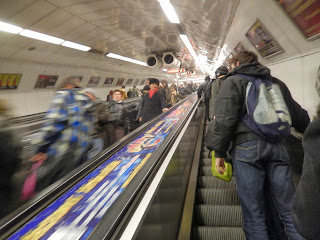 I love bustling around Budapest at this time of year: everybody is out with pretty much the same purpose: to buy cheap plastic crap. And to eat things. All outdoor markets offer a range of foods designed to warm you up. Hot spiced wine is everywhere. At this time of year a shot of strong palinka is nothing to turn down anytime after lunch! While you browse the stands try dome Transylvanian hot sweetbread kalacs! But honestly, the downtown market is priced to serve tourists.

Ten dollar hot dogs do not appeal much to hungry Magyars who just blew their Christmas gift budget on a boar skin throw rug or a retro Lenin coffee mug. What makes those folks happy is a simple market meal, such as the bistro in the back of Bosnyak ter market out in my district. The holidays were heralded with specials such as ... fish soup... made with carp! Bosnyak tér market is always there to take care of you, any time of the year.

This market snack bar may well be one of the most distinctive restaurant experiences in Budapest. We eat there quite a lot - they recognize us by now and can anticipate our orders. First of all, they serve dishes that are all but forgotten on posh downtown menus. Things like stewed lung in cream sauce with bread dumplings. Beef heart stew with dumplings. Scrambled eggs over galushka dumplings. Breaded fried anything. These were the old peasant staples of the Communist era factory lunch meal. Every day - but especially on weekends - there are interesting specials that often involve ingredients you may never have considered as "food" or never expected to see outside of a zoo. And there is nothing "fusion" going on, unless you consider somebody named Mariskanéni to be a fusion pioneer in the kitchen. And prices? Almost everything is less than FT 1000 (about $6) You may be sharing a table with some old pensioners, but the food is top notch. Also: lángos!

Zuglo celebrates with its own Christmas market adjacent to the main one. Complete with Barvarian oom-pah music, the beat of the future in our very own Papcsakistan! Have a good new year! 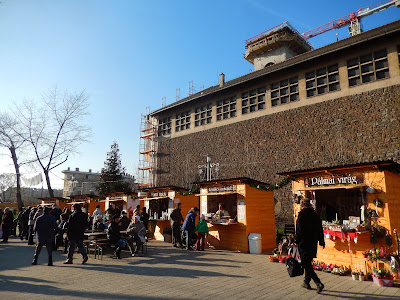