Global warming, Greenland's ice caps melting... whatever the reason this winter was long and dreary in Hungary. Spring hit only a week ago and already it is shorts and t-shirt season and - that rarest of sights - Hungarians walking sprightly in the streets, smiles on their faces not a complaint to be heard, enjoying the long awaited spring days that we thought might never arrive. Nowhere is this more apparent than in our local market at Bosnyak ter. Usually the dire epicenter of Magyar culinary pessimism, the Bosnyak ter market undergoes a transformation with the coming of spring as shoppers greet the arrival of fresh fruit and vegetables and revel in watching the prices drop before their eyes. (The fresh veg? They will probably stew and freeze or pickle it. The shoppers at Bosnyak ter are not a salad eating folk. Far from it. Fresh is not a necessary value attribute for vegetables around here.)
Ramps - wild onions called medve hagyma or 'bear onions' in Hungarian" dropped from FT 900 ($4.00 USD) to Ft 150 (85 cents) in two weeks. And last week we hit the motherload of market delicacies: fresh wild morels. Called kucsma gomba in Hungarian (kucsma is a squat fur hat made from fetal lamb's pelts) morels are among the very first mushrooms that appear in the spring, and the season is usually very short - two weeks at most. We saw these for sale on the tables of the mushroom sellers - people who pick wild mushrooms, then bring them to the market where they are checked by official mushroom inspectors at a truck parked at the market entrance. There is very little chance of buying a poison mushroom in a Hungarian market. In Transylvania, where wild mushrooms are - or were - even more commonly eaten, people used to buy in open markets from trusted sellers - usually Gypsies from families who specialized in following the mushroom picking seasons around the country - until widespread poverty in the 1990s led many rural amateur mushroomers to try their hand at the mushroom business. Of course, this led to a good number of people in Romania being poisoned yearly. With EU membership influencing what you can and can not do in markets these days, wild mushrooms any more are pretty much gone from Romania's markets (but... maybe not entirely... Daca cunostiţi cineva...)
Morels are often classed just one step below truffles in the hierarchy of posh fungi. Fumie remembers having a soup at the Gundel restaurant that was a small bowl of beef consomme with a single morel floating in it. Madame Squid in Paris told me that a kilo of morels in Paris is going for around Euro 90 this week (that's about $125 or more for all you sad $USD addicts.) These babies were FT 2500 a kilo - again, if you are reading this in the US that is about ten bucks for more than two frigging pounds of fungus. Good tasting fungus. I bought several kilos and, using the balmy spring weather in a magical manner, dried most of them. Fumie has this Japanese drying net she won in a contest drawing in Tokyo.
Why she has it here I will never know, but it is basically a box frame covered with netting and has several net shelf levels to hold your drying shrooms (or small drying fish or squid or fruit or whatever it is that the Japanese dry.) In four days you have dried morel mushrooms. Place them in a jar and we have morel risotto for the rest of the year. From the remaining morels, we feasted on fungus. I made a steak with mamaliga and a cream of morel sauce that made both of us very happy. One thing about morels: they are slightly toxic for some folks. Never eat a raw morel. They won't kill you, but you don't want to experiement with what they might do to you. Cooking neutralizes whatever it is in morels that causes Wikipedia to warn us about them. Cooking morels neutralizes the toxins. I come from New York City, where wild mushroom gathering is not one of the more commonly taught street arts, and there is a similar looking shroom called a "false morel" that you do not want to mess with. Luckily, all Hungarian open produce markets have mushroom inspectors, and they really do know their fungus, so I trust what I buy there.
What to do with fresh morels? They have a flavor like concentrate of mushroom... so they go well with a nice bit of beef. Steak is a rarity in Hungary, where unwanted or used-up dairy cows tend to be summarily hacked up for use in stews and for gulyas soup. But we have a couple of butchers at Bosnyak ter market that sometimes - in spring and summer - offer beef that can be fashioned into an acceptable steak. Some years we get decent beef, some years (last year) none at all. There has to be more to life in Hungary than pork and chicken... so we treat visits to the market as a Beef Quest. Hungarian steak usually has no fat marbling, and is often very fresh, both making for a tough bit of meat. These are not Angus or Hereford steers - they probably were making milk for a couple of years before they found themselves on the no exit ramp of the goulash highway. Of course we have no grill on our 1947 era not-quite-up-to-code kitchen stove, so preaparing a steak has required years of careful research and practice.

The secret is to pan fry a thick slice of deboned steak (hatszin or rostelyos) in butter on a very low heat setting for a long time (7-10 minutes) on each side, then let the still rare steak sit under aluminium foil for ten minutes. If the steak slice is thick, I prop it up with some kitchen tongs and let the sides of the steak brown in the pan for about five minutes as well. With a sauce of morels filled out with brown champignon mushrooms, onions, and cream poured over mamaliga we were among the best fed paupers in Budapest this week. Leftover sauce found its way into a pasta lunch the next day. And with a second trip to the market supplying us with even more morels to feed to the mushroom dryer, I made the world's most luxurious breakfast: loose scrambled eggs with morel mushrooms on toast. 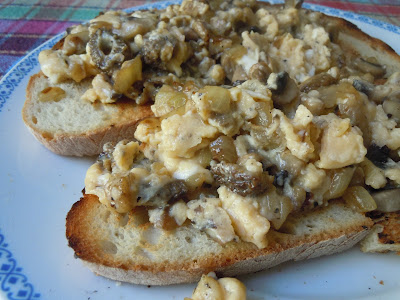 Morel season is now coming to a close in our part of the world, but with luck the cepes should be coming in soon. Huge "chicken of the woods" fungus - the big yellow things that grow on the side of trees - usually come in about now as well. I have a lot of local buddies who are avid mushroom hunters. It is a lesser known fact of the Hungarian folk music scene that the members of the band Muzsikás are all avid and experienced mushroom hunters, who often spend their down time on tour prowling the woods in search of rare edible fungi. During shroom season my fungus crazed Hungarian friends often lay huge bags of sárgagéva which we know as  Chicken of the Woods on me at this time of the year. As a food, these huge meaty shrooms are kind of insipid. They do not really taste like chicken at all... but... they are edible. I'd normally look forward to porcini season in Hungary during the summer... but... I will be in the USA for most of the season. More on that later, as soon as I can tame the new and annoyingly unwieldy Blogger dashboard to bow to my commands.
Posted by dumneazu at 4:52 AM 10 comments: