Maramureș: "A Sausage Every Day!" 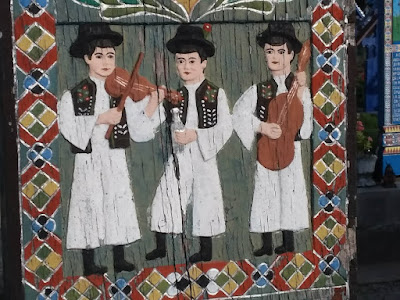 In July I was up in Maramureș, the northern region of Romania which has become my second home-away-from-home-away-from-home over the last twenty five years or so. When I first began visiting Maramureș, it was one of the least developed regions of Romania. This was partly due to Ceaucescu's suspicion that Romania would have to sacrifice this slice of Transylvania if there was ever a Soviet invasion (Ceaucescu was paranoid, but in hindsight, not that paranoid.) Accordingly, Maramures was left a backwater region during communism, with no industrial developement beyond forestry and mining. As a result the peasant culture of Maramureș was able to maintain a sense of cultural continuity that was beaten out of most of East European peasants in the late twentieth century. 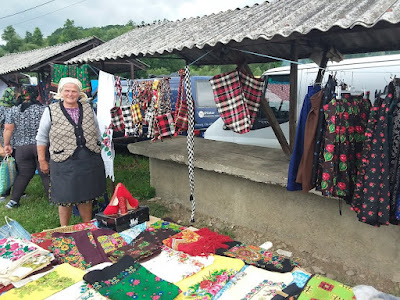 The Moroșeni, as people of Maramureș are known, are famous for hard work. The mountain land is unforgiving, and it takes twice as much work to produce a crop of potatoes than it does in the lowlands.  Traditionally Moroșan men would travel to do farmwork or construction in order to send money home. Today that tradition continues with adults leaving to work in Italy, France, or England and returning in August for a family reunion. And they return with their earnings - western earnings - which they invest in weddings, home contruction, fine new embroidered folk costumes to wear to weddings and dances, and a growing investment in village status. It also means that during the year the children stay at home to be raised by their grandparents, which means that the traditional skills and values of the village are passed on and continued.
In August there are often four or five weddings going on in any village on any weekend day, complete with processions marching through the streets and house receptions where guests are greeted with music, food, and a glass of plum brandy horinca at the gateway. We usually stay in Ieud, a large village in the eastern Iza valley that was described by anthropologist Gail Kligman in her monograph The Wedding of the Dead. (google books link here.)
When we are there in August, we often get impromptu invites to weddding receptions, which means fiddle music, stuffed cabbage, and serial shots of plum brandy at 11 in the morning. The ceremonies involved receptions at the homes of various inlaws (cake, brandy shots, fiddle music) marching aroiund in the streets to and from churches and inlaws (cakes, brandy shots, fiddle music) and finally, at night, buses to transport the whole party to one of the new Wedding Halls - huge, kitsch modern catering halls with garish lights, pink tablecloths, and monstrous sound systems blaring... fiddle music. 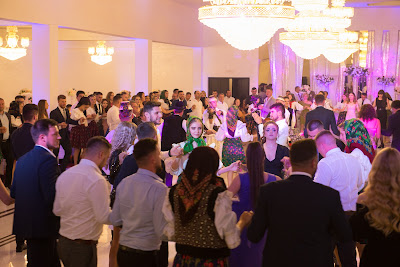 We met Nița Dancuș, our host and good friend, back in 2001 when we went to Ieud to sepnd a few months immersing ourselves in the local dialect of Romanian language while I spent time with the late Gheorghe Ioannei Covaci, the eldest of a dynasty of fiddlers who, at the time, had a large repertoire of Jewish melodies learned in the 1940s from playing with members of the Shloimovici family of Klezmer musicians from thre neighboring village of Rozavlea. 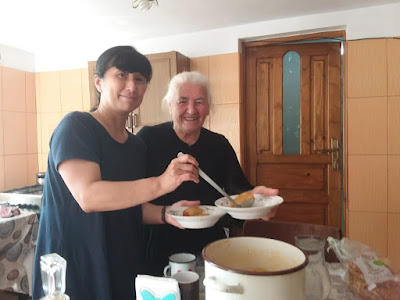 Nița is an encyclopdia of Iza Valley folklore, history, recipes and jokes. She is from one of the most high status families - the Iza valley had a strata of "noble" peasants during Austro-Hungarian rule - and was an activist on behalf of her beleagered Greco Catholic Orthodox Church during the Ceaucescu years. She is also a great cook, and her sarmale (stuffed cabbage) may well be the world's best. Her goat soup isn't bad either, and I particularly like her stuffed peppers.
Back in 2001, I wanted to record Gheorghe Ioannei and his family for a Cd to release to my friend's label in Germany, a mix of their local and Jewish repertoire. I backpacked into Ieud in the winter - transportation was bit more difficult back then, involving a freight train from Cluj to a lumber station on a mountain above a village and then hitchhiking and walking to get to Ieud, hauling a huge Marantz professional recorder and microphones stufffed into my backpack. My spine has never forgiven me. Ghorghe lived in a one room log house on the "gypsy" street along the river in Ieud, and he continued working as farm labor into his late 80s. He once told me about his time as a Hungarian Army POW in an American Prisoner camp in Germany after WWII. "It was wonderful... We ate so well!  They gave us a sausage every day! Imagine that! A sausage every day!" The imagined title of the CD I had hoped to produce was, of course "A Sausage Every Day!"
I arrrived just in time to find Gheorghe's son and designated accordion player Ion, sick with an abscess that looked an eggplant growing out the side of his cheek. I paid for the transport and doctor bills and we sent Ion off to the hostpital in Sighet, followed in true Romani style by his entire family - the family band I had hoped to record. I was left alone with the old man. Hoping to salvage the recording, I still went ot visit him every day, but he insisted his wife accompany him on guitar. Mrs. Covaci was not a great guitarist... A lot of older Maramureș fiddlers heard on field recordings are accompanied on guitar  by a single chord rythymically droning on behind them without any chord changes... this is a clue that the guitarist is, in fact, the wife of the fiddler. Instead of hiring a guitar player (usually a brother or neighbor) the fiddler saves money... and so... we never released a CD of one of the most amazing fiddlers ever to pick up a bow in Romania.
Gheorghe Ionnei Covaci passed away at the age of 88 almost two decades ago, but since then I have been tracking down his brothers, all of whom are fiddlers, to record more of this older repertoire of Maramureș fiddle music., along with other older generation fiddlers, most of whom had never been recorded for commercial or even folkloric purposes before. Gheorghe's brother Nicolae and Viktor lived in the neighboring village of Dragomirești, and for the next few years I visited them regularly until Nicolare passed on some years ago... Nicolae was as poor as a proverbial churchmouse, but he lived next door to his daughter and her husband who worked as a miner. We always make sure to pay village fiddlers for sessions - they are professional musicians, after all - and we always bring a shopping bag for the fiddler's wife: coffee, chocolates, salami, cooking oil, juice, cigarettes, and violin strings. (Cash gifts you pay directly to the primás lead fiddler.) Seeing the treasures we gave the old couple, Nicolae's neighbor was convinced we were making millions of dollars from our recordings of the old man. There is nothing quite like a drunken Romanian miner screaming at you while you adjust your microphones to start a day of field recording.
Most people identify Maramureș with the fiddle, guitar and drum sound that was made popular on Electrecord records by the Frații Petruș (Petruș brothers) in the 1960s. The success of those recordings caused Romanian State Radio to declare that all music from Mramureș would thenceforth be broadcast or recorded only as a fiddle and guitar style. This ignored and pushed out an older style of music that was predomonant in the Iza valley, music played with fiddle, three stringed kontra viola, and bass, the classic Transylvanian string trio ensemble. This was the style of orchestra heard up into the 1970s, and was the preferred style for playing Jewish music. This is a recording made by Romanian ethnomusicologists Ghisela Sulițeanu and Anca Ghircescu around 1970 of the left handed fiddler from Borșa, Gheorghe Covaci known as Stingaci ("Lefty") playing a set of Jewish wedding dances. (Yes... everybody is named Gheorghe Covaci... you get used to it.)
This older style of Maramureș fiddle music has become increasingly rare as the older generation of fiddlers passes away and the slow, odd metered Transylvanian and Jewish repertoire was replaced by more popular local neo-folkloric music spread through popular recordings and video channels. At this point, there may be only one older fildder who remembers having played with Jewish musicians in Maramureș and maybe four who still keep up any of this repertoire. I once asked Ion Pop, the acknowledged curator of Maramures musical tradition, who was left playing the old style music if Maramureș. "You and me... maybe only you and me." that is not entirely true, but that's a blog post for another time.
Posted by dumneazu at 11:01 AM 1 comment: