Klezmer music is a marginal music market at best. It has never produced a cross-over superstar figure. It is rarely broadcast on radio or played in clubs. It isn’t sure whether it is a folk music, a branch of world music, or a launch pad for contemporary composition. It is all of these and none of these. 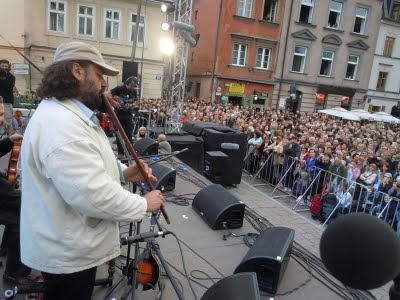 Mark Rubin said it best in his blog Chasing The Fat Man when he wrote that Klezmer is the vernacular music of the Yiddish world. "Klezmer" is a term only genuinely applied to the recent revival of Yiddish dance music. It's a construct, a re-imagination, made up in some cases whole up cloth from people who have only a tangential relationship to the culture that the music originally sprang from… there is no “klezmer” music, there is simply a Yiddish vernacular performance style. Thus, any tune can conceivably be played in a Yiddish style and thus made Yiddish, when filtered through the experience of the Yiddish vernacular speaking Jews of Eastern Europe. With an opinion like that coming from one of the best Klez musicians, it is easy to see why the Krakow festival works so well. It allows the different strains of Jewish music to stretch out and grow. By bringing in some of the best musicians in the Jewish music world (notice I didn't narrow that down to just “Yiddish”) the Krakow festival becomes a fertile ground for new ideas among the musicians, for new cooperation between bands, for meeting people, jamming, and just the general “hang”, which Rubin says is one of the three pillars for accepting any gigs (the other being pay and quality of music.) And the hang at Krakow was excellent. 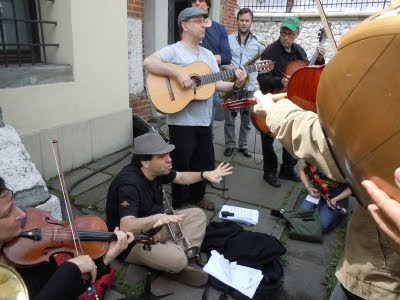 First of all, it gives us a chance to hang with our singing clarinetist (and cantor) Jack “Yankl” Falk, who lives far away on the other side of the planet and only gets to Europe when the stars are aligned correctly and there is something like the Krakow festival or a major tour for the band. 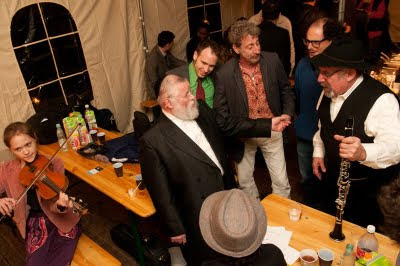 And why not stick Yankl alongside the legendary Bobov cantor Benzion Miller for some otherworldly scat nigun singing on the basis of Dave Tarras and Moishe Oyser's “Stanton Street / Chassidic In America” arrangement. Hey, and let's throw in cantorical world music wonder boy Jeremiah Lockwood of the Sway Machinery for good measure? Now are we satisfied? Michael Alpert is another friend who I actually hang with more on the road at festivals than at home in New York. 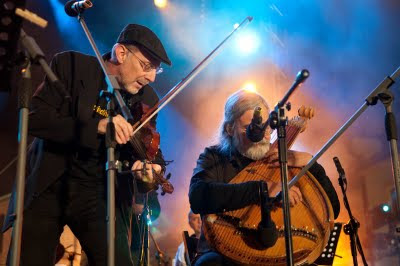 He was presenting a program of music reflecting his decades of working with Julian Ktasty, the New York Ukrainian American bandurist who is one of the leaders in the revival of the bandura tradition (Stalin murdered all the existing Ukrainian bards in the 1930s in his effort to destroy Ukrainian identity.) And where there is an Alpert, it is not unlikely to find Stu Brotman playing bass. 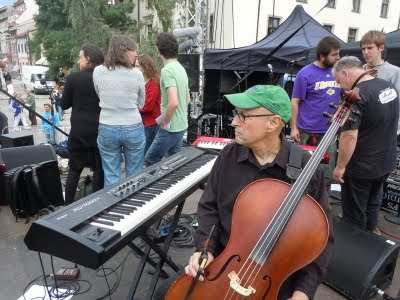 Stu – whose roots go back to the psychedelic 1960s in Los Angeles (he was in the original Canned Heat and the band Kaleidescope) is always welcome to any jam session since he carries his specially setup folk bass (basy) designed for portability (just look for the little man with a bath tub strapped to his back.) Stu was one of the silent masterminds behind the whole Klezmer revival, producing early LPs by the Klezmorim and Maxwell Street bands, as well as holding down the bass clef in Brave Old World. I caught up with him at the dance workshops led by Steve Weintraub. 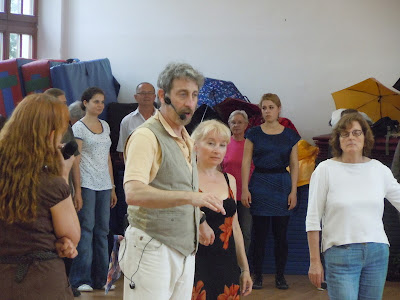 Steve is a professional Broadway choreographer as well as a dance ethnologist, and his first love is to get ordinary people up and dancing, and let them get fussy about the ethnography later. So he teaches small sets of fun dances with a vocabulary of hand movements and short figures that allow even the most club-footed of dancers participate. Yes, people have fun at Steve’s workshops. Hmmm… maybe we should all learn from that. And of course, Le Roi de Brass Klezmer Hizzonner Frank London - seen here beside Latvian songbird Sasha Lurje. 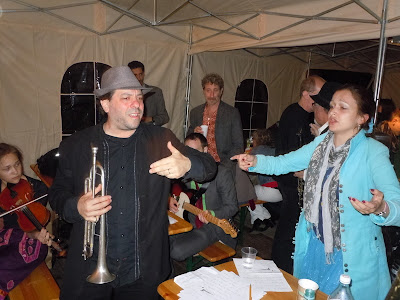 I know frank from way back in Boston in the last century, when the Klezmer Conservatory band was starting out and we used to meet at latin jazz sessions in Alston’s sprawling hippy ranches for jam sessions. When Frank moved to New York he roomed with my buddy, drummer Samm Bennett for a while and we stayed in touch over the years as the Klezmatics took off and brought them regularly to Budapest (Frank would occasionally bring me vacu-packed pastrami from Katz’s when he was on tour.) 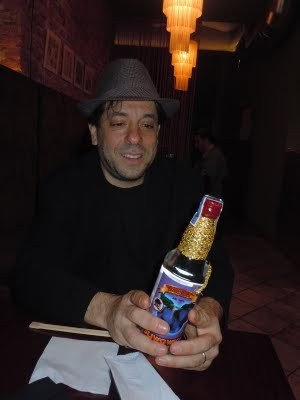 Frank met me after our gig at the big Synagogue with a bottle of home brewed Polish Jewish slivovitz that he scored and we were off to dinner at the Kura Japanese Restaurant with Roger Davidson and some of the other musicians. The Kura is the only Japanese restaurant in Krakow with a Japanese chef and so Fumie and I ate there as often as possible. Which was a lot. And what Chinese food was to earlier generations of New York Jewish musicians, Japanese food is today. 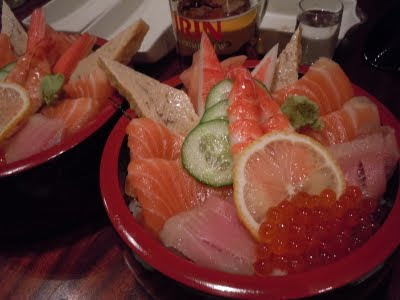 Yes, it was good. And when you compare the prices to Japanese food in Western Europe or the USA (or even Tokyo) it was excellent value for the quality and service. Of course, we were in Poland... and as soon as we got into our Hotel Painted Birdster Dan Kahn turned us onto a tiny pierogi bar - the Vincent - just around the corner where we could load up on excellent lamb-stuffed dumplings in garlic sauce for only four Euros. 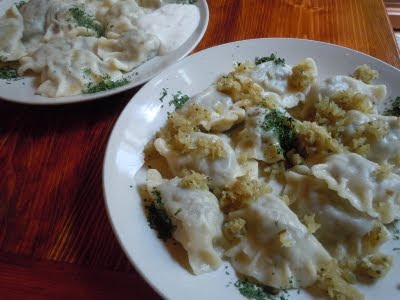 The Festival of Jewish Culture, Krakow. 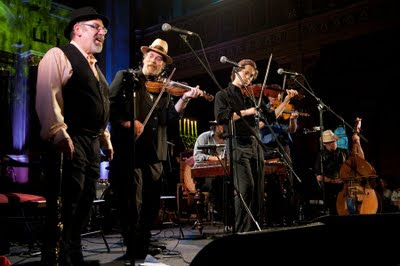 The 21st Festival of Jewish Culture in Krakow, Poland took place last week and I was honored and excited to take part as a performer with Di Nayes. It is a festival like no other – ‘festival’ hardly describes how the entire city quarter of Kazimierz is transformed for a week into a center for Jewish and Yiddish culture including concerts, workshops, gallery exhibits, museum presentations, dance, and food. It is pure nakhes to be there, not the least because it gives us Klezmer musicians a chance to spend some real quality time hanging with each other, hatching new musical projects, and meeting the people who actually listen to us and sipping coffee with them in the many cafes that have sprung up in Kazimierz. A lot of writers have mentioned the supposed irony of the Jewish revival in Kazimierz since the release of the film “Schindler’s List” but to visit Krakow during the festival is to see how a small but dedicated group of people – Poles trying to recover the multicultural heritage of their country – can make an annual festival the cornerstone of a cultural movement that ensures that the Jewish culture of Krakow endures all year long. The founder of the festival, Janusz Makuch, is well known to all of us dealing in East European Jewish culture. Janusz embraces the old multicultural heritage of Galicia – the southern Polish region that anchors itself to the urban center of Krakow. 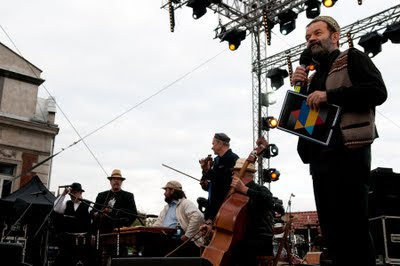 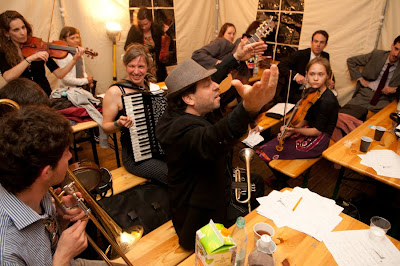 A festival has to be more than a charismatic organizer – and Janusz leads an office of organizers unlike any other festival I have been to. Patient, efficient, with an endless well of good humor, Kasia, Robert, and a small army of young volunteers guarantee that everything flows smoothly, no small task when dealing with dozens of musicians and artists’ bruised egos and lost luggage. While there are other good Jewish music frestivals in Europe – London comes to mind, as well as the projects coming via Paris’ Medem – Krakow is the Big One. (This makes me more than a little ashamed to even think about the ridiculous schmutzerei that is Budapest’s idea of a Summer Jewish Festival – a festival that can’t ever seem to find any decent Jewish music or arts even with a budget large enough to float the Titanic. But then Hungary is not Poland.) 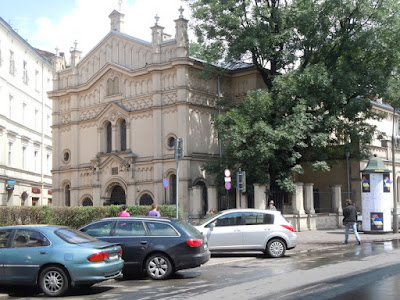 And then there are the venues – especially the glorious Tempel Synagogue where we played our big concert. A classic 19th century Moorish Revival style synagogue restored to a fully functional state with excellent acoustics and room for a large audience, this was a place that could serve performers as intimate as Lauren Sklamberg and Frank London’s Tsuker Zis Project, and as big and party happy as the amazing show by Jeremiah Lockwood and The Sway Machinery with guest Sarahwi singer from Mali, Khaira Arby. 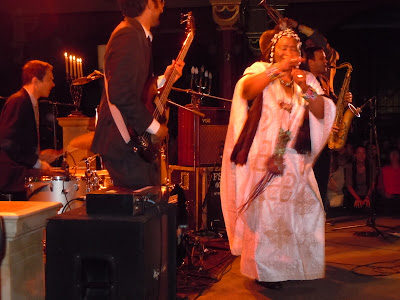 Lockwood has done amazing things using cantorical music and has also done some amazing work that has been documented on the Nigun Project via New York's The Forward web site, but he has deep roots in country blues and with a lineup including alumni from the New York Afrobeat band Antibalas they simply blew me away. Late at night the crowd gathered at the funky Alchemia Club next to the old market for late night jams led by Paul Brody with a changing cast of musicians. And then there is the big closing concert at Szeroka Square – the Mother of All Jewish Music concerts, ever. From Israel came the stunning and innovative Yemen Blues. This year the special guest – nobody can be said to be the ‘headliners’ here – was Abraham Inc., a project that and… Fred Wesly, the trombone player from the legendary James Brown Band in teams clarinetist David Krakauer with DJ Socalled Josh Dolgin the 1960s and 70s. 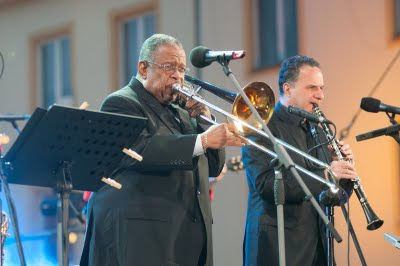 Yes, the driving sound behind “Hot Pants” and “Say it loud, I’m Black and Proud” before joining my all time favorite funk band Parliament-Funkadelic and leading their offshoot The Horny Horns. Yes, that Fred Wesly, pumping out funky horn lines behind Yiddish samples mixed by Socalled and held up by one of the best lineups of contemporary funk I have seen in years. And that's just the finale. Dan Kahn and Painted Bird had to leave early, but their show was one of the most memorable of the concert series - most of the shows are available on the festival website – including ours (Scroll down for Di Naye Kapelye.) I could go on and on… which it already seems that I have… but I will save it for a post later this week. There is so much to talk about… and I still have to go through my photos and unpack my bags and put all the instruments away… Serdecznie dziękuję, Krakow! 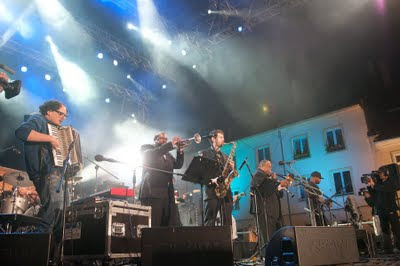