A lot has been written about the role of the Christian Fundamentalism in American politics, which formed the "base" of support that former President G.W. Bush often referred to in his spectacular losing race to the Democrats last fall. Isn't it about time we let the eloquent voice of American Christian conservatism speak for itself? This speech sums up most of the important points in the American Religious right's debate about the role of the Church in modern life. You may disagree with what the speaker says, but you have to admit that his points represent what a lot of Americans are thinking right now. And when is this kid going to get his own show on FOX News?
Posted by dumneazu at 5:07 AM 3 comments: 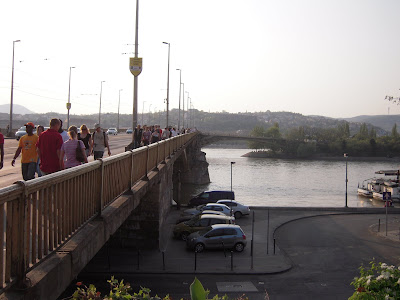 Spring arrived early in Budapest this year, not a moment too soon. The weather warmed up in March, so we've been back on our bikes riding around town avoiding the rising price of metro tickets as much as possible. The last two weeks have been sunny and warm, and half the city has been out walking around, taking the family to Margit Island and soaking up the solar rays. 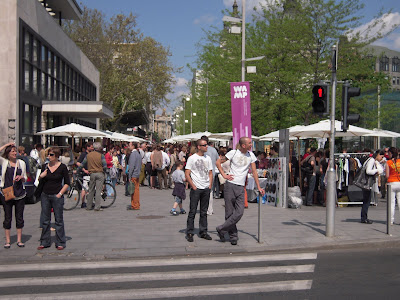 Sunday was a big outdoor day in Budapest - there was a marathon race running through Northern Budapest, as well as a family friendly version of Critical Mass bike run and, as always when there is a Critical Mass event, the WAMP fashion market (above) at Deák tér. 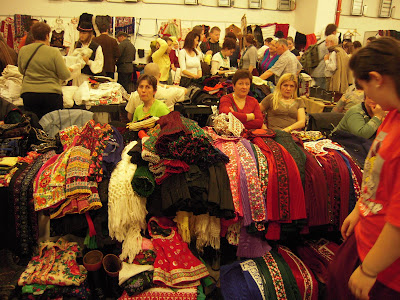 Fashion is as fashion does, and the National Folk Festival (or the Dance House Meeting as we know it here) was held on April 4th this year, and as always half of Transylvania was there selling folk costumes. The festival has become increasingly a marketplace for folk dancers over the last few years, and now that it is back in the concrete monstrosity of the Sport Arena it seems to have lost a lot of the funky goodness that it used to have. 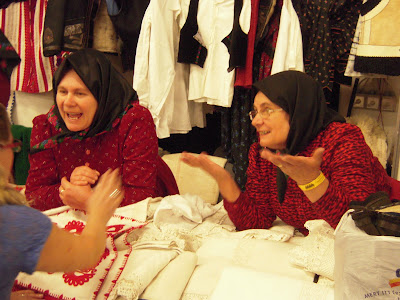 Of course, the peasant ladies of Szék are always there, dressed as always in their red or black costumes. These folks figured out the folk music and dance market as far back as the 1940s, and due to the unique (strange?) sociology of the village itself, they've maintained their dress codes far longer and stronger than mst other Transylvanian villagers. The black head kerchiefs? They wear them in mourning for the destruction caused by the Mongol invasion of the 13th century. That's a pretty stubborn sense of fashion statement. 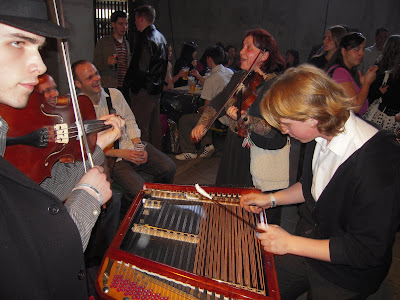 What gets me about the Dance House Festival is the crap treatment given to the musical participants, while the commercial crafts sellers seem to be catered to head and toe. The main live music jam are is located outside the stadium, in a dark fenced off area of the bus station parking lot called the "Folk Tavern." Here you can buy overpriced sausage, pricey watered beer, and hear great folk musicians from all around country playing in the acoustic spledour of a long distance bus garage. 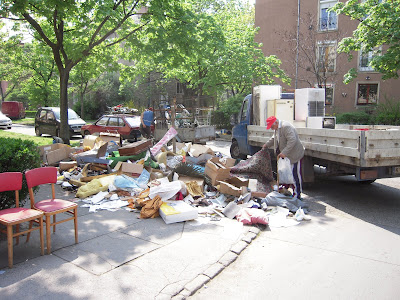 Another harbinger of spring is garbage day. Garbage day came a month early out here in Zugló this year. The neighborhood goes into a frenzy of tossing out and picking up used crap. The streets were filled with Gypsy families who rent trucks and follow the schedule of junk days around the country collecting, very politely and professionally going for recyclable metal and old carpets. People would wait by the building and ask "Would you, perhaps, be throwing out any carpets this year? Old clothes? Computer stuff?" And yes, we did throw out a lot of all those things. And amazingly, we didn't bring anything off the streets back into the house... 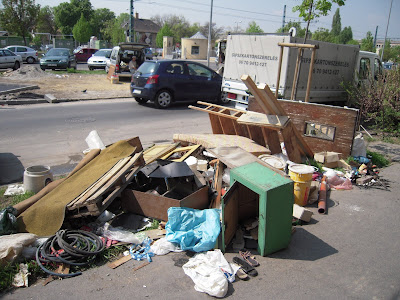 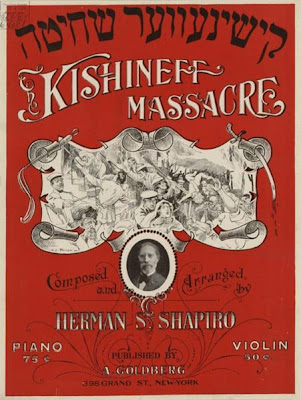 It has now been just over a century since the tragic Kishinev Pogroms, an outbreak of antisemitic violence that shocked the world at the tiime and galvanized Jewish national identity into the modern era. In my family, my Grandfather was a witness to the pogroms, and when I was growing up listening to his stories it felt like the events had happened only recently: for most Moldavian Yidn, that still is the case. Sometimes it seems a bit anachronistic to be singing songs in Yiddish about the Cossacks in the 21st century, but the truth is that is exactly what I used to hear while sitting at a kitchen table in the Bronx when I was growing up. 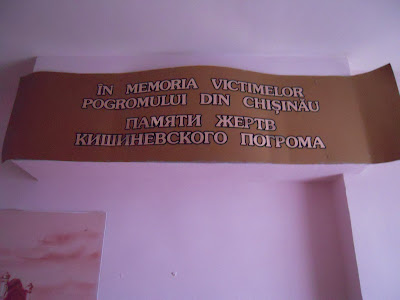 The Forward writer J.J. Goldberg wrote in 2003: Kishinev, the capital of the czarist province of Bessarabia, today's Republic of Moldova, was a town of some 125,000 residents, nearly half of them Jewish. Ethnic tensions were running high that spring, thanks to a noisy, months-long campaign of antisemitic incitement by local nationalists.The rioting began on Easter Sunday, after rumors spread through town that a Christian had been killed by Jews in a ritual murder. Mobs rampaged through Jewish neighborhoods for two days, burning, smashing, raping and killing. When it was over, 49 Jews were dead and 500 wounded, 1,300 homes and businesses were looted and destroyed and 2,000 families were left homeless.The brutality sent shock waves across Russia and around the world. Leo Tolstoy spoke out. Mass rallies were held in Paris, London and New York. Western governments protested the apparent complicity of the czar's police, who had refused repeated pleas to intervene. The Forward reported the news with a banner headline: "Rivers of Jewish Blood in Kishinev." 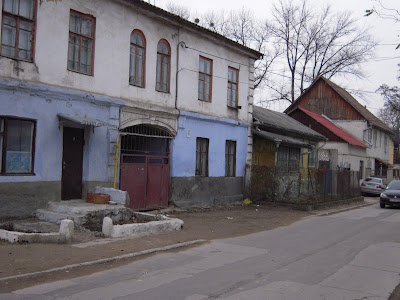 The pogrom is generally remembered to have broken out at a house at number 13 Asia Street - seen below - which is still there today. Yiddish Poet Haim Nahman Bialik wote a long ode to the victims, The City of Slaughter. A Ukrainian journalist named Kholodenko visited Kishinev after the pogrom and wrote about the destuction: 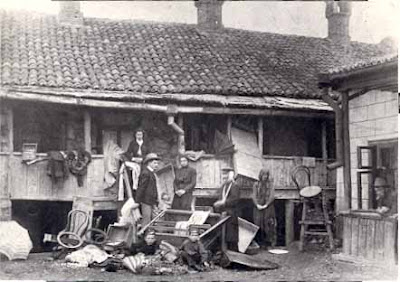 "House No. 13 is situated in the fourth district of Kishineff, in a by-street bearing the name of Asiasky, at its juncture with another by-street, Stavrisky; the names of these narrow and tortuous little streets are known but indifferently even to the inhabitants of Kishineff themselves. The Jewish cab-driver who drove us (many Jewish cab-drivers were among the killed and wounded) did not understand at first where we wanted to go. Thereupon my companion, who for the last three weeks had been breathing the air of Kishineff, and was able to find his way to all the principal places of interest connected with the massacres, explained to the driver, "House No. 13; where they killed!" " Ah! I know!" replied the driver, nodding his head and whipping up a horse as dejected, as miserable, and as half -starved as himself. I could not see the man's face, but I heard him mutter through his beard words that sounded like "Nisensen" and "the glazier." Nisensen and the glazier were a short time ago living men. Now they are but symbols, representing the concentrated horrors of recent massacres." 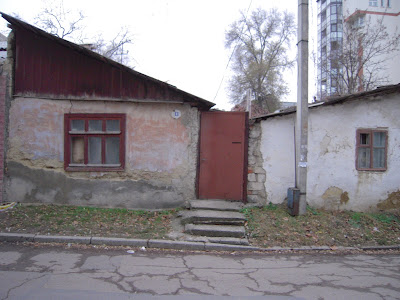 House no. 13 as it stands today. Across the street lies the new Jewish Scool of Chisinau, but with business demands for real estate in the Moldovan capitol city a lot of the older Jewish neighborhood is being developed at a fast rate. Here's Asia St. 13 seen from a different angle... 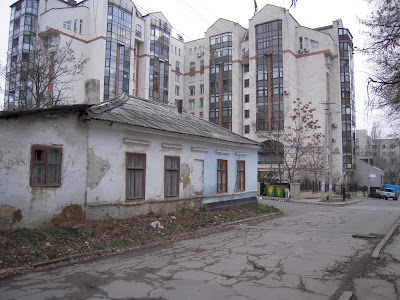 The Jewish community of Chisinau is about 15,000, very well organized, and well integraqted into the national life of the country. As in many post-Soviet countries, the main force behind religious education and community renewal is Chabad Lubavitch, who have done a nice job on the Synagogue. 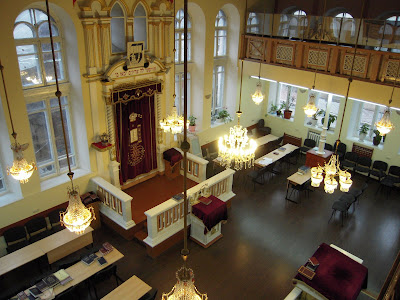 Sadly, today's news also brings reports of rioting and demonstrations in Moldova. The BBC reports that the riots are a result of a contested election, and my friends in Chisinau tell me that at least this time the unrest does not seem be marked by the ethnic tension between speakers of Russian and Romanian that marred the elections of a decade ago. I can only hope that things calm down over the next few days. And I wish a peaceful Peysakh for everyone this year.
Posted by dumneazu at 2:29 PM No comments: