The Hungarian Parliament: Of Power and Pastry.

The Hungarian Parliament building is Europe's largest, an imposing and elaborate structure that dominated Budapest's Danube profile. Designed at the end of the 19th century to accommodate the growing number of representatives expected from Hungary's growing stature in the Austro-Hungarian Empire, it was inaugurated in 1896 to celebrate the 1000th anniversary of Hungary (which actually happened in 895 AD, but the architect for the 1895 millennial celebrations died before the Budapest World Exposition at Hősök tér could be completed, so the history books were amended to the more convenient millennial date that could accommodate the celebration in 1896.) but only completed in 1904, because, according the a Wikipedia article, the architect went blind (perhaps from looking at it?) No sooner had it opened than a riot broke out among quarreling political factions in 1904, a pattern in Hungarian politics that would carry over well into the 21st century.
Natives of Budapest, always a snarky lot, often refer to the Parliament as the "Great Circus" or as the "Wedding Cake" in reference to its imposing, imposing, very imposing architecture. Less than 10% of the building is actually in use. The first world war put an end to Hungary's dreams of packing the building full of half-assimilated Bosnians and Ruthenians arguing about tax abatement in broken Hungarian, and the Wedding Cake became a symbol of Imperial dreams worthy of Icarus as well as a pretty nifty place to park tourist buses. With the electoral victory of the FIDESZ party in 2010, party leader Viktor Orban felt the need for a more imperial... imposing... or perhaps, defensible... look to the square, and reconstruction of the entire area around Kossuth square was begun. First parks full of unsightly trees were cut down, and soon statues of obscure and historically doubtful politicians were removed. The statue of Attila József - perhaps Hungary's greatest poet and the first person ever to be kicked out of the communist party - was found to be offensive to the Prime Minister's line of site, but protests saved the statue which was moved to a less prominent site nearby. For a year or so the entire area was a construction site, complete with an unexpected green slime lake when the Danube seeped into one of the excavations for an underground parking lot.

But today it is complete... a massive expanse of cement, perfect for massive party rallies extolling Our Great Leader as he makes yet another speech to the Adoring Masses. And what goes better with a new Parliament prone to rioting representatives than... a new parliamentary guard with the power to remove MPs who cross the Speaker of the House! Yes, these flesh and blood tinker toy soldiers are an official branch of the Hungarian defense services. Yes, large amounts of tax money is spent on tailored uniforms and choreographers. Could these guys stop an invading horde of beer-crazed Slovak football fans? I doubt it.

But enough of this political foolishness. We have loads of that in this part of the world, although, speaking as a Hungarian nationalist chauvinist I will loudly assert that our political ass-clowns are the biggest and best ass-clowns in the world. That said, if you are in the neighborhood of the Parliament and Kossuth square you can visit something that can actually make a claim on being the best in its field, and that excludes parliamentary democracy. Just north around the corner from the Parliament at Balassi Balint utca is the Szalay Cukraszda, an old family-owned pastry shop that has been in this location since 1917. 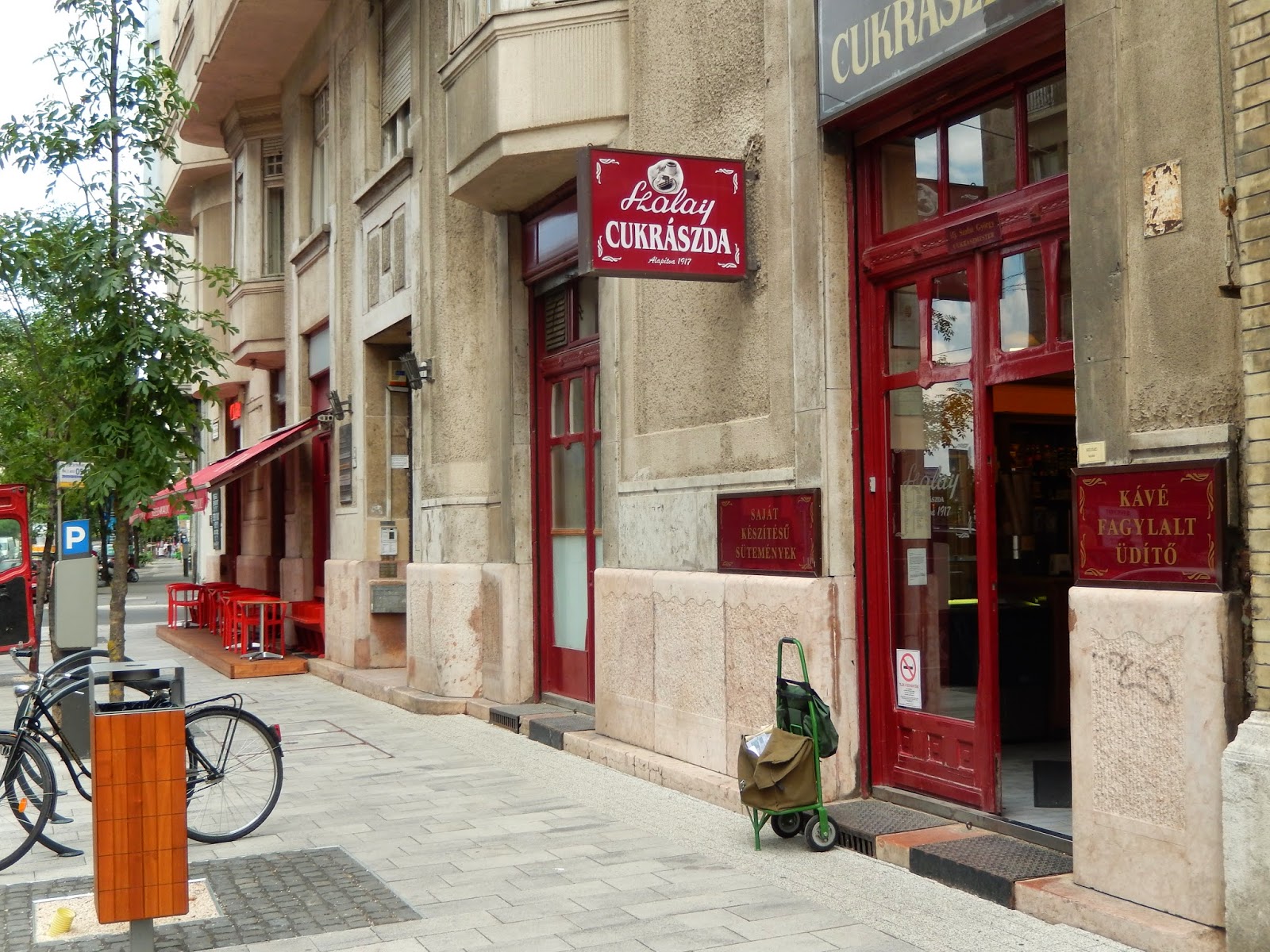 Legend has it that it escaped being taken over by the state during communist times because the party functionaries (the Party offices were just across the street in the "White House" at Jaszai Mari square) wanted a place that actually cared about its baking and coffee. I hadn't visited in years - I don't ramble around the Parliament much unless the Prime Minister hands over Azeri axe murderers to be released and rewarded by the Azeri government. (Jeez, doncha just miss Ferenc Kumin?) Or when there is something interesting at the Museum of Folklore located across the street from the Parliament, but soon to be removed to some cement structure in the soon-to-become-a-treeless-memory City Park.

In those cases a side trip to the Szalay shop is a given. The place is tiny, as a good coffee shop should be, and spotless despite its age. Most of the baked goods are made in house, and my special assigned pastry taster Fumie took special note (buying an extra for breakfast) of the svájci kifli "Swiss croissant".

As always, I get a "long coffee" with no sugar. The days have been extremely pleasant in Budapest this summer: so far none of the heat waves that have scorched us in times past have arrived. While biking up Falk Miksa utca near the parliament we passed the Google Mapmobile taking snaps. I have already checked: I have not yet been immortalized in Google maps but I may be soon!