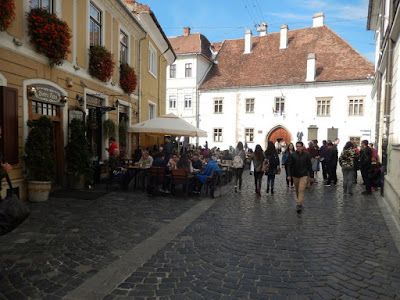 The Tranzit House (Casa Tranzit / Tranzit Haz) is a cultural center that opened twenty years ago in the Transylvanian city of Cluj ( in Hungarian: Kolozsvar) Romania. Originally it was the Poalei Tzaddik orthodox Jewish synagogue, but by 1990  the Cluj Jewish community had shrunk to about 200 and had few resources to maintain the many abandoned synagogues in the city. When I first saw the shul it was a miserable ruin - broken windows, collapsed roof - hidden in a courtyard along the Somes river in downtown Cluj. Csilla Konczei, an anthropologist known for studies of ethnic minority folk culture in Transylvania, established the Tranzit foundation to promote multi-ethnic and independent arts, rented the abandoned building on Strada Baritiu, and set about restoring the building as a cultural center. When they formally opened the restored shul as a performance space in 1997, Di Naye Kapelye was invited to play on a bill that included the Palatka Band. This year, I was invited back to play again to celebrate the 20th anniversary of the opening.

Before the concert they showed a bit of video of our performance in 1997. Twenty years ago we were a smaller band, and I was twenty years younger. It seemed a bit cruel to have a twenty foot tall digital image of my younger self on the wall for instant comparison with the grubby old Jewish guy scraping away on a fiddle just below it. For this gig there wasn't the budget to bring Di Nayes so I played with a couple of younger Hungarian folk musicians from Cluj and with a couple of hours of practice we managed to pull off a set.

Even when there isn't a big budget I am willing to play Cluj just to underwrite a free visit. It is my favorite town in Transylvania, my second home in Europe, and a lot of my warmest friends are there. Also the memories of friends who are no longer among us - Saska Jeno, the Armenian Priest of Szamosujvar, Carmen Titrus, the daughter of the great Gypsy violinist Alexander Titrus, the Palatka fiddler Marton Kodoba, and my fiddle mentor Berki "Arus" Ferenc: Feribacsi from Mera. I miss them all, and when I play in Cluj I feel like I am presenting a concert for ghosts. Don't get em wrong - I'm fine with the living who come to concerts. They pay for tickets, at least.

Also, there is the flea market - the Oser de Haine - on Saturday morning. The Cluj flea marlet used to be a huge sprawling mudfest of used clothing, motorcycle parts, and live rabbits for sale that spread over several kilometers of an outlying district of Cluj and snaked along the railway tracks to add a frisson of danger as one browsed amid whooshing trains and stray dogs along the tracks. Even today the streets leading to the market are clogged with people peddling stuff.

Inside the market there is a lot of stuff that would rate as "junk" to some but treasure to others. People still depend on bargain hunting in Romania, and used clothes are a big seller, as is kitchen equiptment, gardening tools, and abandoned creepy dolls that could be in an art school film class project.

We didn't get to visit the Fair at Negreni this year, but I managed to make up for it by picking up a knife sharpening stone and three hemostats for less than five Euros. I checked around just in case anybody was selling eighty year old diatonic accordions - if a vintage single row diatonic Monarch in repairable condition is ever going to show up, this is where it ought to be. And then... lunch!

Let's be honest - I was as guilty as anyone of promoting Romania during the 1990s as the last wild and primitive place in Europe, full of grimy factories, depressing block flats, pristine villages and food that would pass as inedible in a Brazilian prison. Back then horse carts did roll around downtown and sheep grazed in the city parks... but no more. And remember: nobody wants to be called the last primitive place in Europe.

I have since watched Romania surpass Hungary in total amount of trendy cafes, Neapolitan pizza, middle eastern lunch joints, internet wifi speed, wild trout streams, and anti-corruption laws. You really have to search for anything that reminds you on Romania as it was in the grey 1990s. The flea market is that place.

To be honest, I love eating at the flea market, or anywhere Romanians go to eat mititei, also called "mici" which can, justifiably, be called "primitive" As far as ground meatwads go, the Romanian version is the least civilized, compared to Bosnian cevapi, Turkish kofte, Serbian cevapcici, and even the dreaded cuminburger Bulgarian kebabche. Its basically a log of ground cow, garlic, and salt made rubbery buy the addition of soda bicarbonate, eaten with bread and mustard. But when in Romania, do as the Romanians do: eat the mici! 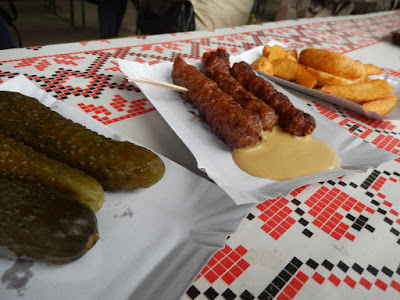