Cluj and Negreni: Its all in a name. 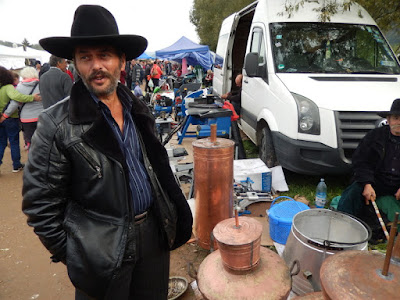 Its been over a month since my last post. During the refugee crisis there was simply too much to be angry about. The flood of lies pouring out of Hungarian government officials proved to be simply too much. I would sit at the keyboard, shaking with rage and barely able to finish a paragraph before realizing it would be better to simply stop. Do you really need another angry screed from me when you can already find much better expressions of anger in the Washington Post and the Guardian? And after the misery of the refugee experience in Hungary the last thing I felt like like posting were photos of the food we had in Croatia in August. Oh, did I mention that Hungary has closed its border with Croatia?

Things have not gotten better - not for the refugees, not for the Hungarian people, not for Europe or the Middle East. But the twisted policies of Viktor Orban do not represent all Hungarians. Often when things get hairy in Hungary we cross the border to Transylvania to spend time with our good friends who are "normal" Hungarians who do not live under the rule of nationalistic football clowns. This year we went to Transylvania in October for the autumn fair at Negreni, known in Hungarian as the Feketetó Vásár. It is a huge social event for Transylvanians, as well as a magnet for visitors from Hungary and other parts of Romania drawn to the antique market, clothes, shoes, tools and cut rate household items on sale. It has been a couple of years since we last went, and a lot of my good local friends there have passed on, but it is the last great peasant fair left in east Europe. It hasn't really become a festival or commercialized folklore pageant yet - people still sell hand carved farm tools and shepherd equipment, and during the week before the antique sellers arrive they still do a brisk business in horses and donkeys.

Negreni is halfway between Cluj (in Hungarian: Koloszsvár) and Oradea (Nagyvárad.) Why do the towns have two names? Transylvania used to be part of the Kingdom of Hungary, and subsequently it has been an independent vassal of the Ottoman empire, a part of the Hapsburg empire, a part of Hungary, and , after the Treaty of Trianon in 1919, it has become a part of Romania (although a part of it returned to Hungarian rule during the second world war and back to Romania again in 1945.) You see how this works? You ask why each town has names in different languages and a Hungarian starts giving you a history lesson... You are sitting down, right? So most places that were found in the former Austro-Hungarian Empire will have an official name in their local language, and an official name in Hungarian and German, and maybe a bunch of names in other local languages. So, the official name in Romanian of the Romanian city where I visited is Cluj (or Cluj-Napoca, which is another long and tedious quasi- history story from the Romanian point of view which we will not start getting into.)

Cluj is quite enough for now. In Hungarian it is "Kolozsvár" ("Kolozs Castle") in German it is "Klausenburg" even though Transylvanian Germans mostly live in the suburbs of Stuttgart these days. In Yiddish we call it "Kloyzenberg" and most of the people who would wear Kloyzenberg Football Club T-shirts if they could get them live in Williamsburg in Brooklyn (not the cool part of it) and Bnei Brak in Israel. The local Gypsies call it "Kokoshforo" in Romani (as in "We used to live in Kokoshforo before we moved into these over-the-top Gábor palaces in Huedin!") .


Now, if you think the preceding explanation was a bit long winded and unnecessary, remember that each and every place name in Transylvania suffers from a similar place name schizophrenia, and that at least everybody can agree that these places, being, after all, located in Romania, can be identified easiest by their Romanian names. Not so fast. in Hungary it is customary to only refer to towns and places that were formerly in the Kingdom of Hungary by their Hungarian names. Thus, a Hungarian newspaper writing a story about Cluj would refer to the city as "Kolozsvár" and not add the Romanian name in brackets, since everybody reading a Hungarian newspaper knows it is Kolozsvár and maybe has some other name but "who gives a fuck about that." If you do publish the word "Cluj" in a Hungarian newspaper you will get swamped by angry letters from readers. This can almost make sense until you realize that places like Rijeka, Slovenia also used to be administered by fat and jolly Hungarian officials of the Hapsburg Empire, sitting in lonely office rooms hopelessly wishing they could chat with somebody - anybody - in their native tongue. (Hint: they couldn't.)

So do we still write "Fiume" (yes, sometimes, but probably not if it is a practical travel piece) or Szlovakia (winter szkiing is cheaper in Totország... errr... Slovakia.) Since Slovenes, Slovaks, and Romanians, and, in fact, everybody who lives in a country that was once administered by fat and jolly Hungarian officials no longer has to give a flying fuck about what place name the fat and jolly Hungarian official wants to stamp in your passport, the Hungarian place names now exist mainly in the hearts and tongues of, you guessed it, the Hungarians. Which is why we found ourselves in Feketetó. Or Negreni, as it is known on maps and by the people who live there. We went with our friend Brigitte, an insanely talented violinist from Montreal who is currently touring Europe with Geoff Berner's band for their new Cd "We are Going to Bremen to Be Musicians." It was Brigitte's first time in Transylvania - I can't imagine a better introduction to this region than the fair at Negreni.

We met up with the Rostas family of musicians from Bratca as soon as we entered - son Nicu had a trumpet fiddle for sale but sadly, we learned that Mircea Rostas - who made some of the best fiddles I have ever played - had passed away. Over the last few years a lot of the older generation of these unique resonator fiddles have passed on: Dorel Codoban from Rosia, Mircea, and Mircea's neighbor, the gentle and friendly Traian Ardelean, who was tragically murdered by a family member in nearby Alesd. But we did meet up with some fiddlers from Balnaca in the beer tent.

And we did get to satisfy my need for mici, indelicate meatwads of grilled animal that are the perfect accompaniment to a performance of sixteenth notes on a home made trumpet violin.