An Immigrant Feast in Trumpland: Elmhurst and Jackson Heights, Queens

New York City is a big place, so the best way to see it is to break it down into manageable pieces and chip away at it street by street. The Elmhurst section of Queens is, perhaps, New York's most diverse area, which is saying a lot in one of the most diverse cities in the world. With a population of ninety thousand Elmhurst has one of the newest Chinatowns in the city, a large community of Mexicans, various South Americans, Indians, Thai, Vietnamese, and even Istro-Romanians (there are possibly more speakers of this Croatian Vlach dialect in Queens than in Croatia.)

What there aren't is a lot of white folks, checking in at less than 6%. This may be surprising since Queens has always been New York's Whitest borough - home to Archie Bunker (actor Carroll O'Conner grew up here) and - although not in Elmhurst - El Trumpito himself. Yes, the Orange Narcissist in the Oval Office is from Queens, and his psychological makeup shows it - an inferiority complex about not being suave enough for Manhattan, smart enough for Brooklyn, or tough enough for the Bronx, We New Yorkers have known and despised El Trumpito for a long time - we are familiar with his real estate con man's style picked up from mobsters working with his racist father. Trumpito has been part of our lives for decades, and we New Yorkers always express surprise that the average American can't spot the screaming clues that mark him (and his shyster lawyers) as a bunch of  con-men and grifters. Today, a visit to Queens is a visit to Trump's nightmare: happy, successful immigrant communities on the way to becoming a new majority within the American dream.

Our guide to Elmhurst was our old buddy Bob Godfried, accordion repairman, ethnomusicologist, NYC public school teacher, crusading socialist, and the eminence gris behind much of New York's ethnic community culture. The Indonesian community in Queens holds monthly get together food festivals (Next one: August 25!) in a Church in Elmhurst, and Bob was going just to touch base with community organizers and look into the possibility of finding traditional music in the expatriate Indonesian community. We didn't find any music, but we did find a lot of families having a good time, eating, socializing, and just enjoying a rainy day in a Church rec room. 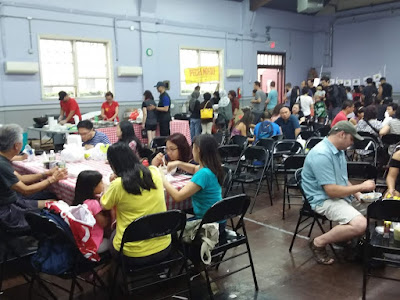 With over a thousand islands and hundreds of local cultures and languages, there is no single Indonesian cuisine, but a lot of the vendors here were serving food from Sunda and Sulawesi, not as spicy as some Indonesian cuisines but just hot enough to keep things interesting. There was a lot of beef rendang dishes - spiced meat stewed so long it had turned black and tender. Fried chicken was all over the place. Lots of satay meat and peanut sauces - be thankful there are no closeup photos of the peanut sauce. It doesn't photograph well.

Fumie ordered a selection of fish balls with noodle. Fish balls are one of those Asian foods that westerners never get excited about: basically fish meat baloney, a processed goo of grey fish meat formed into logs or balls, and in this case, deep fried until crispy. But add some lime-soy-pepper sauce and noodles and things perk up considerably. We barely missed out on the spicy squid, but Bob tried the next vendor and got what must have been New York's best value in seafood platters. 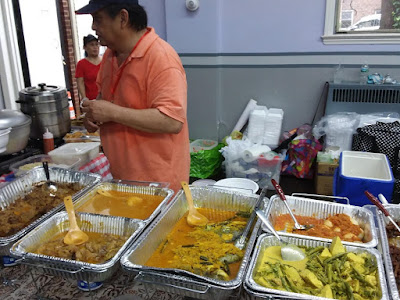 We then stopped off at a Chinese supermarket and picked up a few things for Budapest. Chinese mega-supermarkets are one of the great benefits of chain immigration (even better than Melania's parents getting citizenship!) A 99 Ranch market has just opened up in nearby Hackensack which means that we can take out from their food court at a moment's notice. It isn't amazing food, but it is authentic Chinese. For some reason New Jersey has never had any good Chinese restaurants. Jersey has lots of Chinese people, but they traditionally took Grandma to nearby New York for Chinatown shopping on weekends, What we do have are some of the worst Chinese take out places imaginable: orange duck sauce over starchy brown gloopy stuff finished with fortune cookies. But over in Queens... people are a bit more demanding. Just west of Elmhurst is Jackson Heights, which is home to one of the larger Indian communities in New York. And that means a lot of vegetarians. Indian cuisine is the only cuisine in which I do not require a gory chunk of bad-karma laden animal flesh to make me feel like I have eaten well. 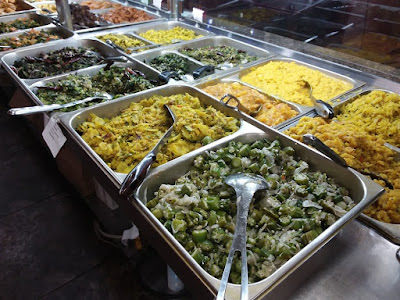 Some of the best Indian and Bangladeshi food in the city can be found in modest lunch counters located in the back of supermarkets here. There are dozens of places on each block. And not only Indian. The Himalayan community of New York is centered in Jackson Heights. Yes, Nepalis, Tibetans, Gurkhas, and various para-national tribal people who hold jobs on Wall Street. And everybody has got to eat. In the Himalayas, that means momos: stuffed dumplings served with spicy sauce. 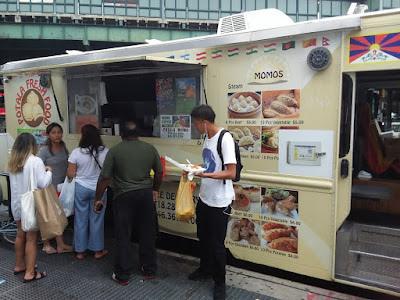 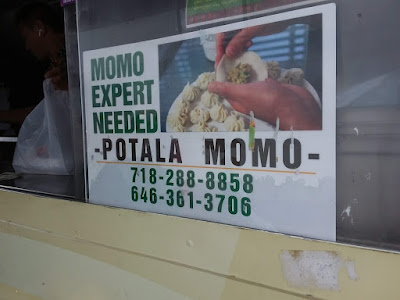