Refugees in Budapest: Not a Proud Day for Hungary. 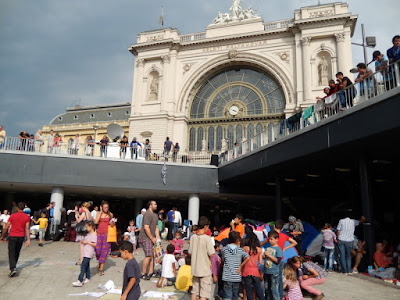 Yesterday we went to Keleti train station. Thousands of refugees mill around the station and in the lower level, which was designated a transit zone, but is in reality a temporary refugee camp. Humanitarian aid, information, and basic services are all supplied by civilian volunteers through the Migration Aid stand. No Churches, Red Cross, charities… and certainly not the government. The Budapest city provides only one water tap for thousands in the middle of a heat wave.

The Hungarian government and the City of Budapest have stated that the refugees “should not have come here” and are not entitled to any help or care whatsoever. It is an astonishing lack of empathy, considering the fact that in 1956 hundreds of thousands of Hungarians arrived in Austria fleeing unrest under similar conditions. (But they were white, of course.)  If not for the kindness and generosity of Hungarian civilians, this would be a full on humanitarian catastrophe zone. We dropped off a couple of loads of apples and bananas and walked through the protected tranzit zone – set up to protect the refugees from attacks by Hungarian right wing radicals who started making appearances about three weeks ago.

Hungarians love it when their nation is in the headlines, but they were not prepared for the international media showing the suffering crowds at Keleti station and reporting on the increasingly cynical ploys of the Hungarian government to fool or entrap these people into overcrowded camps. Yesterday the bait-and-switch game which lured refugees onto trains aimed at talking them to collection camps led to a headline in the Hungarian portal 444.hu to exclaim “What the Hungarian government is doing to the Refugees is Complete Scumbaggery “  The refugees are exhausted, traumatized, and hungry. They do not want to stay in Hungary… and, for the Syrians at least, they have been promised sanctuary if they can reach Germany. I have been getting calls from all over the world asking “What is the Hungarian Government trying to do?

OK. Let me try and explain. The Hungarian government is, in effect, the FIDESZ party. There is virtually no opposition. Forget all the other parties, Hungary is a FIDESZ joint. And FIDESZ is the party of Viktor Orban. That is the entire ideology of FIDESZ in a nutshell. Got it? Viktor wakes up in the morning, says some things during the day, and that becomes the party ideology and the Will of the Hungarian People. It is essentially a one party system and a one-man party.  (I am sure that there are FIDESZ folks who would argue with this point, because FIDESZ is full of young country lawyers who have never held an actual job, so they will argue endlessly about this point, and many others, such as why they can’t let refugees leave the country to Germany. They love arguing.)

Orban does a lot of things that make him newsworthy in a Lex Luther kind of way… far too many to list here. But last winter Orban and FIDESZ got buried balls deep in a financial scandal involving the Quaestor Brokerage House, and it looked like the FIDESZ Empire was cracking, at least in the polls.  In the wake of the Charlie Hebdo murders in Paris, FIDESZ inspired response was to launch a new Public Relations campaign alerting Hungarians to a new threat to their beleaguered society: Refugees, particularly economic refugees who were coming to take Hungarian jobs away and spread Islamic terror. The PR campaign spent millions on roadside ads to troll the official xenophobic view, which was quickly taken up in the countryside. This was well before the unexpected flood of Syrians that chose to leave their war-torn land during the summer.

Orban’s beef is mainly with the EU. Why? Because there is a lot of money in the EU, but they attach conditions to getting it. Orban doesn’t like conditions: he often declares that the EU insults the “honor of the Hungarian People” by asking what ever happened to some billions of EUROS it thought it had spent on a highway or something or other. Orban actually had a twelve million dollar (private donations, of course!) football stadium built in his own village, more or less in his back yard. When the EU started saying that Hungary had to accommodate refugees crossing into Schengen Europe via its Serbian border, Orban simply refused. Hungary couldn't afford it!  Hungary would not accept any refugees – especially non-Christian refugees. The refugee crisis is “a German problem” said Orban.

Hungary is not a target for the refugees. None want to remain here. All you have to do is pick up a copy of the Economist in Istanbul and you can figure out it pays better to be a fast food worker slinging doner kebab in Frankfurt than to be a nurse or teacher in Budapest. The deaths of 71 Syrians in a truck found across the border in Austria focused attention on the problem: if the refugees can’t move forward in a legitimate way, they will seek whatever means are available to them to get out of Hungary, including the very real danger of refugee smugglers. . They may not know where they are going, but they certainly know where they are fleeing from. As one refugee said “Nobody puts their wife and child in a boat unless they truly have to.”

Today several hundred of the refugees decided that they wouldn’t wait for trains any longer. They set off by foot from Keleti station to walk to the Austrian border. It will take two or three days, and I suspect they will encounter a a trap by the police and border guards someplace along the line. Because... Hungary! Tomorrow, Austrian activists are planning a convoy of buses and cars to help refugees get across the border into Austria. Five have already been arrested in Hungary and charged with refugee smuggling. The Czech Republic and Slovakia have eased border controls to simplify the flow of Syrians to Germany. And in Hungary Our Great Leader is busy pointing his finger and blaming Muslims, the USA, the Germans, any cause that relieves him of the responsibility of making a simple humanitarian decision.

Yes, it is sick. It is a combination of misplaced pride, megalomania, and paranoia that drive Orban: the cameras are on him, and he must not fail. But in the back of his mind, there is always the fear… in 1964 Richard Hofstadter published the essay “The Paranoid Style inAmerican Politics” which examined the role of religious intolerance  in two hundred years of American political discourse. It ends: “A distinguished historian has said that one of the most valuable things about history is that it teaches us how things do not happen. It is precisely this kind of awareness that the paranoid fails to develop. He has a special resistance of his own, of course, to developing such awareness, but circumstances often deprive him of exposure to events that might enlighten him—and in any case he resists enlightenment… We are all sufferers from history, but the paranoid is a double sufferer, since he is afflicted not only by the real world, with the rest of us, but by his fantasies as well.” 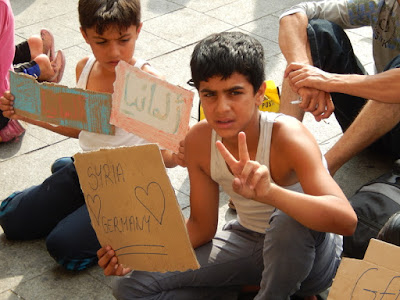 One refugee has died today trying to escape the refugee camp in Bicske. It will get worse before it gets better.