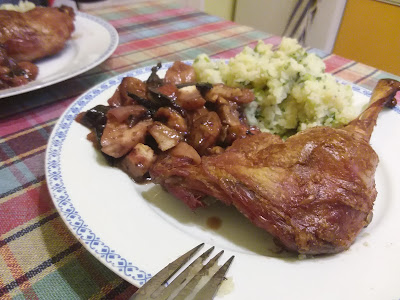 November - that bastard child of the calendar, a blurry sump pit of grey days and unfortunate holidays - has finally passed. We know this because thousands of Americans have loudly celebrated Thanksgiving last week, chowing down on synthetic domestic turkeys and stuffing in simulated Zoom family gatherings. And then there is Black Friday, a mindless consumer orgy culminating in... Christmas? We don't do Thanksgiving in Hungary - no fanatic English Pilgrims washed up on the shores of the Danube to swindle the Hungarians out of their land and concoct tales of a happy feast to honor the myth. There is no horrific November turkey massacre in Hungary. Turkey is mainly available on school lunch menus and as cheap breast meat for shnitzels. You won't find a whole turkey for a thanksgiving roast unless you know a specialty butcher who can order it for you. But we Central Europeans do have a favorite edible Big Bird. November 11 is Saint Martin's Day, and in Hungary (as well as Austria and the Czech reservation) we gorge on goose.
Saint Martin is not on anybody's A-list of saints. Apparently he was a Roman soldier who shared his red cloak (which I suppose is a nice warm bit of outer clothing) with a freezing beggar who then revealed himself to be Jesus Christ His Own Self, thus guaranteeing Marty a place in the heavenly kitchen alongside other poultry saints such as Colonel Saunders and Anthony Bourdain. I don't know how goose became the focus of Sant Martin's day, but there is a folky saying that if you eat goose on Saint Martin's Day you won't be hungry for the coming year. The celebration seems to have been a bigger deal over in Austria and Czechia, and became popular in Hungary as a restaurant week marketing ploy during the 1990s. This year, however, restaurants have been closed (except for delivery orders) by the covid pandemic which meant that there was an huge glut of goose meat on the market. Prices plunged... We picked up a whole huge honker at our local supermarket from the cut-price sale cooler for FT2500. That is about US$ 7.00 for a fat plucked bird the size of your average roll-on luggage case.
We fed off of that bird for a good week. Goose is the Hungarian Jewish equivalent of what the buffalo was to the plains Indians, except we didn't make clothes or tents out of the thing. First, I butchered it with my trusty chinese chef cleaver: legs off, breast off, and then quartered the carcass.  We roasted the carcass first and then made soup, while saving the rendered fat for future projects like making matzo balls and flavoring chopped liver (yes, I actually do eat a bit on the Jewish side of things.)  Hungarians rarely cook goose at home, given that Hungarian kitchen stoves tend to the small side and local geese tend to resemble feathered Volkswagens. Goose is a usually restaurant specialty. As I mentioned in the last post, we usually took advantage of the goose offered by the now sadly defunct Kadar Etkezde across the square from us.
Kadar offered a modernized - that is non-Kosher - version of traditional Hungarian Jewish cooking, in which goose fat substituted for lard - the basic oil of Hungarian cooking. Basicallly, Kadar was a Jewish restaurant serving pork chops and various nosstalgic Hungarian dishes that in most cases disappeared from menus after 1990. The legendary Hungarian chef Karoly Gundel's famous cookbook starts off on the first page with the rule that onions must be sauteed in pig fat without any substitute allowed - and he built a culinary empire based around it. Jews, on the other hand, chose goose fat as their basic cooking medium. In pre-refrigeration days the goose meat itself was likely to be butchered and smoked for long term storage. There is nothing quite as good as beans cooked with smoked goose breast, but lacking anything resembling a smoker (geez, we live downtown I don't even have a balcony) I simply pan fried the breasts as I do with duck.
That left us with huge bits of body meat and wing meat and offal (liver, kidneys, heart and neck) and the stock, so next up was ludaskása (Hungarian goose pilaf.) Ludaskása is a play on out of date old Hungarian language: lud is the old term for goose and kasa refers to a family of medieval boiled sludge passing as food that were often based on buckwheat or oats. Today ludaskása is made with rice but it is one of the few classic Hungarian recipes that predates the use of paprika (which came into fashion only in the 19th century.) It really is just a third generation Turkish pilaf by another name.
At least having Goose Week breaks up the covid pandemic monotony. We haven't been able to travel at all this year, which kind of explains the dearth of blog postings, and even within the city of Budapest I find that a day spent inside reading obscure linguistic papers and playing mandolin is a day spent safely isolated from the plague outside. At least we have been able to keep amused watching the train wreck that was the American presidential election. And it is with a great sense of satisfaction that I can look forward to a future without having to wake up daily see the bloated orange face of that lying, child-caging rapist pretending to be the leader of the Free World every evening. No, I did not like him. No I did not vote for him. And no, I do not forgive him... just fuck him and all the furry little critters that came in with him. Its time to breathe again.
Posted by dumneazu at 4:46 AM 5 comments: