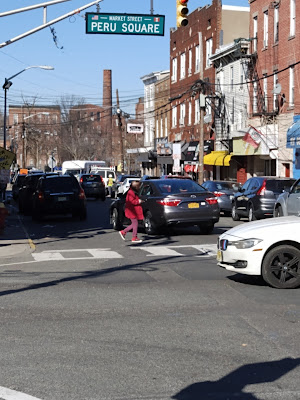 Nobody goes on vacation in their home town. You go on vacation to get away from it all, to put your troubles behind you, to enjoy the sights and flavors of being far away from daily life. So maybe you can understand that I have spent the last few months in New York without actually visiting New York. I'm a New Yorker, Bronx born and bred, and this is not a vacation. I'm in New Jersey. Nobody in New Jersey is on vacation.
New York City is four miles away from us in New Jersey but we have yet to cross the bridge. This is because we are staying with my Dad, who is a few years short of a century. And we don't want him (or us) exposed to Mr. Covid, so we have been avoiding the city like, well, "the plague." We arrived on the crest of the Omicron wave in December, so no crowded subways for us, no Christmas shopping crowds, no packed Chinese food courts on this trip. I don't, however, feel like we are missing very much. Manhattan has changed over the years into a playground for the very rich and very infected, and apart from a few neighborhoods like Chinatown and Washington Heights, there is little on the island to attract me beyond its museums. Gone are the bookstores, CD shops, weird musical instrument stores, replaced by Starbucks and office space and hot yoga studios. If you are looking for New York ethnic neighborhoods where you can find a decent meal for ten bucks, you have to head out to the boroughs or the suburbs.
So we did. We went to Paterson, New Jersey, with folklorist and klezmer cimbalom player Pete Rushevsky, who had never been to the fabled Silk city. Paterson is roughly fifteen minutes drive from my folk's home, and yet nobody I grew up with ever visited the place, and it maintains an air of mystery and menace among New Jerseyites roughly equivalent to the way Italians view northern Albania.
Paterson is the uncut urban gem of the New York area. It is one of my favorite places, also: Nobody visits there. It boasts the America's first industrialized city, complete with a waterfall in the middle of downtown, the second biggest east of the Mississippi behind Niagara Falls. The Falls impressed Alexander Hamilton so much he encouraged the growth of heavy Industry, eventually making Paterson the "Silk City" a center of the silk and textile trade which attracted the first Turkish and Syrian merchants to settle in the USA, and now South Paterson has the largest Turkish and Arab community in the New York area, and America's second largest Muslim community percentagewise. We visited the amazing Fatal Bakery - now a mega supermarket of Middle Eastern foods, and had some killer kunefe at a bakery on the corner of Crook's ave.
Downtown Paterson is home to Little Lima, a large Peruvian community with the largest community of Quechua languge speakers in the USA. We had lunch at the Market Street Lena y Carbon to satisfy Fumie's need for a rotisserie chicken and fried rice, two things Peruvians have pefected to a science. Peruvian food is the ultimate Creole mix. Home to one of Latin America's larger Chinese emmigrant populations, Chinese food has become fully integrated into Peruvian cuisine, with the classic dish being "chaufa" fried rice (from Cantonese chow fan) The general term for Peruvian Chinese food is "Chifa" and you can find specialized Chifa joints all over the Paterson area, alongside regular Peruvian eateries all of which will serve chaufa fried rice, at the least.
While New Jersey has a lot of great ethnic food, Chinese food is not one of them. I have been dragged out to some of the most miserable Chinese restaurants in New Jersey (Tenafly? Englewood? Fort Lee? Teaneck? Just ask me and I will name names!) where my safe go-to is to order fried rice. I love fried rice. It is a simple, almost canonical Cantonese dish that comprised about 75% of the things I ate for lunch before I moved to Europe decades ago. Over the last few years, however, I have seen so many strange concoctions posing as "fried rice" that I have lost count. Weird tumeric yellow grainy stuff with kale bits, bowls of wet rice floating on salad, leftover rice doused with miso... all horrible art projects on the theme of fried rice by cooks with no idea of what fried rice is or should be.
So when Fumie's order of chicken and fried rice chaufa arrived I almost fainted: it has literally been years since I saw a proper plate of fried rice in New Jersey. I ordered the mixed meat chaufa, and it arrived as a monstrously huge portion of perfect fried rice loaded with beef and chicken. My surprise is not so much that the Peruvian style of chaufa is so amazingly good... it is just fried rice, after all, but I am surprised at how amazingly bad the fried rice from the average NJ Chinese take-out has become.
The portions at Lena y Carbon were huge... Pete finished off his Lomo Saltado with tallarin noodles - basically a beef lo mein on steroids - in a few seconds but we had to ask for boxes to take home the leftovers of our orders. We had also ordered a parihuela, a fish and seafood soup originating from the seaport of Callao that came stuffed with shrimp, fish fillets, mussels, and even a couple of crabs for good measure. This made the Tokyo half of our marriage very, very happy, but it was enough to serve a small family so it went home with us as well. Now we are obsessed with finding more Peruvian food before we return to Budapest, where it can safely be said, no Peruvian food can be found.
Posted by dumneazu at 12:05 PM 4 comments: