I actually like New Jersey. Not the boring, rolling suburbs, not the huge shopping malls, not that New Jersey. My New Jersey is three story brick, dilapidated, and often has a Tatar bakery and a Mexican taco place on the ground floor. My Jersey is served by a private bus company that doesn't speak English. My Jersey eats ugly fish that Anglo-Saxons won't touch and stews it with okra and peppers that are not bought in gourmet shops. My New Jersey smells bad, but not from chemicals. My New Jersey comes in vanilla and chocolate and has no smoosh-ins.  My New Jersey remembers when muskrat trapping was still a viable part of the suburban economy, and the Overpeck Creek attracted more rat trappers than dog walkers. My New Jersey is  funky. My New Jersey is red hot. Your New Jersey ain't diddly squat! Jersey manages to maintain pockets of Olde Jerseyness here and there, hidden treasures of community and heritage that very often include strange takes on hot dogs or middle eastern foods that may possibly be illegal in many western states. One of my favorite places when I tell people in Europe that I am visiting "New York " is actually Paterson.
Paterson, New Jersey, is not widely known as a tourist draw. Actually, I may be the only person on Earth who considers it a tourist magnet destination. Most New Yorkers have never been here. Heck, most New Jerseyites give the state's third most populous city a wide berth, rarely venturing near Paterson, a mere twenty minute drive down Route 80 from the George Washington Bridge. If they come at all, it is to see the Great Falls of the Passaic River, one of the east's most dramatic waterfalls after Niagara Falls.

The water power drove the industry that powered factories and mills, especially silk mills, which led to the city being known as "Silk City." Silk also drew merchants from the middle east, and today the area around Main street in south Paterson is home to a booming ethnic community of Lebanese, Syrian and Palestinian Arabs - known as Shaami Arabs. Shammi Arabs are those whose dialect of Arabic echoes earlier Aramaic languages, and the culture of the Shaami is characteristically Levantine-Mediterranean in cuisine and heritage.

With neighboring Clifton, Paterson is also home to America's largest Turkish community, not to mention smaller communities of Circassians, Karachay, Tatar, and Abkhaz from the Caucusus region. And that's just the southern bit of Paterson. If you are the least bit Islamophobic, perhaps this isn't the neighborhood for you. Or maybe it is: nothing can convert a bigot like friendly faces serving good food. Since we were in the middle of Ramadan, the Muslim month of fasting, a lot of my favorite Turkish places were closed during the day, or preparing for the evening iftar feast that breaks the fast, but we managed to find some excellent lunch last week at Le Vie, a Lebanese cafe and hookah place that was empty because of the fast but happy to serve us lunch.

Twelve bucks gets you the mixed kebab plate of your dreams - ground meat kofte, extremely tender marinated lamb, and yogurt marinated chicken breast - but the real prize went to their hummus and baba ghanoush. Shaami style hummus goes very thick on the sesame tahini, and adds cooked raw chickpeas as a garnish. This was smooth, thick, and almost sweet, swimming with excellent olive oil. Six bucks. Olives and pickles come with. Why haven't I ever discovered the joy of olives and pickles with hummus?

Not only was the food amazing, but La Vie has a large terrace space for relaxing urban outdoor dining, something that is sorely missing in the NJ suburbs. This is because hookah bars - cafes where you can smoke water pipes on outside terraces - are all over this area. They might not serve booze, but you can smoke and sip coffee and argue about football and Syrian politics all night and... it drives the non-Arabs neighbors nuts, unfortunately. I felt like I was back in the Balkans for a moment. I could easily waste hours here, sipping coffees and watching Arabic videos on the giant TV screens.... but shopping duty called. Just down the street, Fattal's Bakery is  much more than a bakery: it is a grocery, a jewelry shop, a lunch counter, and a top notch butchers shop where all those middle eastern goodies you seek in a gourmet shop are for sale at half the gourmet price.

There are a lot of halal meat markets around Paterson. Actually, there are not "a lot." There are gigatons of halal meat markets around Paterson, avalanches of halal lamb, beef and goat everywhere you look, vast universes consisting of halal butchers upon halal butchers. Pigs can safely retire at old age in south Paterson knowing that - as long as they avoid Hispanic neighborhoods - they can sleep soundly and never fear the butcher's knife in their wildest nightmares. And amid this heaving mass of halal butchery there is the meat counter at Fattal's, a shrine to legs of lamb, sheep kidneys, beef heart, premixed ground meat kofte mixes, and lamb sausage. And there is the sweets counter - The Magic City of Pistachio Baklava. Two bucks gets you a tub of fresh halva bits, and if you are planning a post fast BBQ, why not spurge on some pigeons and quail?

A street away is Nouri's Syrian Bakery, which basically offers exactly the same stuff in a similar space as Fattal's. Za'atar spices mixes? They both have them. Tahina? Choose from dozens of brands from all over the middle east. Take home some of Nouri's freshly-made-ready-to-fry falaful mix, rumored to be one of the best in the New York area. It is certainly one of the most authentic. Still feel like shopping? Drop by the Dollar Depot across the street for all kinds of ramadan gifts!

Paterson is also home to a large Hispanic community, especially recent arrivals from Mexico and Peru. Downtown Paterson is known as "Little Lima" and is full of Peruvian restaurants competing with each other for the best ceviche. The downtown is full of Latin American restaurants and small businesses. If you come from Mexico or Salvador and want your family to live in a house, not a tenement, Paterson is perfect for you.

North Paterson is still mainly black American, and Paterson still has one of the few remaining stadiums dating to the era of segregated baseball teams: Hinchcliffe Stadium was home to the New York Black Yankees and the New York Cubans of the Negro Leagues. Satchel Paige played here. Paterson native Lou Costello (of Abbott and Costello) started a career as a boxer here and used to do shows here. Is this not a noble heritage?

I was warmly invited by some locals via the comments to to contact them for further investigation into the delights of Paterson area cuisine. Sadly, guys, my time is short and I have a lot in my basket (much of it from Fattal's, actually) but I appreciate the invite and extend the same to you if you ever get to Budapest. I am still scratching the surface of the area - I don't drive and I have to convince friends with cars that they won't get whacked and tossed over the falls Soprano-style if they dare to explore in Paterson or Newark. And I simply can not eat that much in one day. I have covered the local hot dog scene (Texas Wieners!) and at least one of the Jewish delis of Newark (Hobby's!) as well as the Portuguese seafood... and I have yet to try the ceviche in Little Lima but some papusas always seem to get in the way. Next up: Taylor Ham and Twenty One Egg Platter Novelty Dishes! 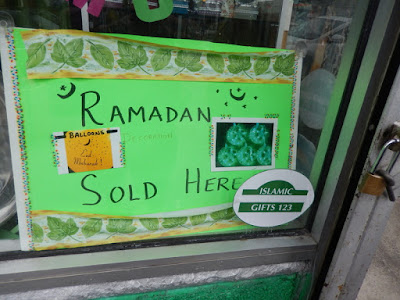 Thanks for showcasing my hometown. You got the Arabs in South Paterson. That's easy to find. Did you notice the Jade Garden on Main St. and Montclair Ave? That is a Peruvian Chinese restaurant known as a "chiffa." Pretty damn good and you get french fries in your stir fry.

There are several Jamaican restaurants scattered around town and there is a growing Bangladeshi with a few food places. Market Street is full of Peruvian restaurants. Then there is the local pizza place in Riverside where the same family has been cooking the same recipes in the same place since 1931.

Man, did you ever step on your nightstick. Lou Costello is Paterson's native son.

But thanks for stopping by.