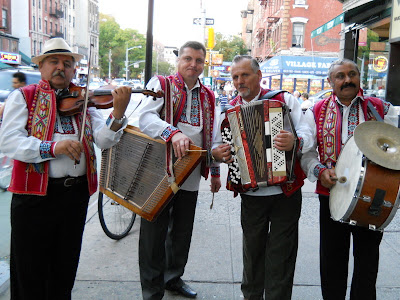 It has been a week since the Técsői Banda played at the Central Park Summerstage for the New York Black Sea Roma Festival. It was the high point in the life of these guys, who today are safely back in their home town of Tjaciv recieving an award from the Mayor of Tjaciv himself for playing at an esteemed international festival. 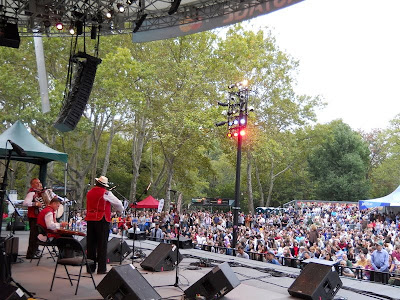 Not to mention that tsymbaly player Vasil Hudak's daughter is getting married today. Not shabby at all for a traditional Hutsul band from the western Ukraine. The boys were a joy to be with while they were visiting New York, especially when we brought them down to the East Village for their gig at the Ukrainian National Home Restaurant on 2nd Ave. 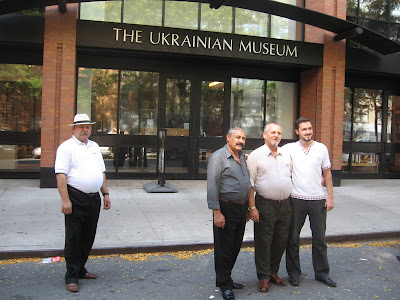 With some time to spare, they strolled around the village, amazed at the presence of so much Ukrainian culture to be seen - the Ukrainian Museum, Ukraianian churches and schools, the impressive Surma bookstore. Even more impressed was the crowd at the Black Sea Roma festival. Alongside some of my favorite East European and Balkan musicians like Selim Sessler from Turkey, Yuri Yunakov from Bulgaria and now the Bronx, and the Mahalla Rai Banda from Romania - who are old friends who remembered me from our now legendary festival gig in Finland some years ago during which we spent three days trout fishing on a river near our festival. 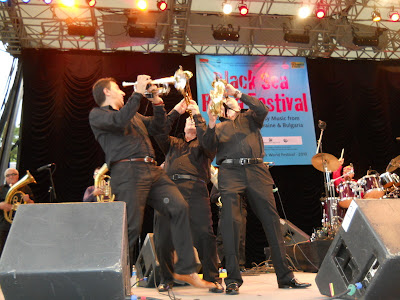 Yes, I taught the Mahalla Rai Banda how to fly fish for trout. Sombody had to. I'm in a bind for time so more posts to follow. The last week has been a non-stop manuscript race against the clock for some contract work I had to finish... but the joys of watching the the Técsői Banda discover New York Pizza - eyes bulging in surprise that pizza was never like this before! Thanks goes out to the Center for Traditional Music and Dance in NY (Ethel Raim, Pete Rushevsky, and Eileen Condon,) and to Isabel Soffer of the World Music Institute, and especially to Shaun Williams for getting the details done that got the band here. You all did a great job. 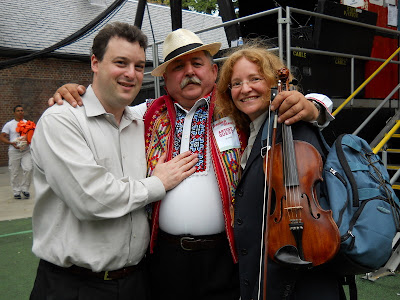