Yes, I have been lazy posting while traveling, something that I have never been guilty of before. Since the Ukrainians left town we have both been taking it relatively easy - we both have writing work to complete while we are here, and the weather is still warm, and since we can sit in my parent's garden watching the squirrels while working, we have been enjoying life in New Jersey. New York is a ten minute, $3 "Spanish bus" ride away, though, and we have to make up for lost time eating Chinese food. For some odd reason, New Jersey doesn't have much in the way of consequential Chinese food. Lots of local Chinese , check... lots of Asian supermarkets... check. But the Chinese food in Jersey... meh. The Korean food here is amazing, and good Japanese is never far away, but for good Chinese you have to hit The City. 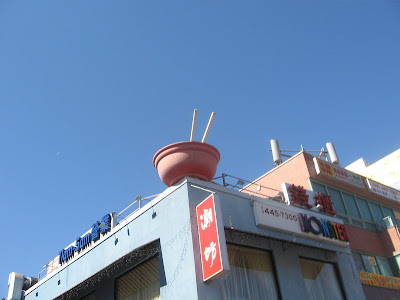 We started out by exploring Flushing with my Dad. Flushing, Queens (written as "Fa-lo-shen, Emporess City" in Chinese on the shuttle buses that run to Manhatten's Chinatown) is an half hour on the subway outside of Manhatten in the Borough of Queens, known to most as the home of JFK Airport. It is also the home of New York's largest and most vibrant and diverse Chinese neighborhood. This is where all the different ethnicities end up, including Manchurians and Uighurs, and everybody eventually dines at the Flushing Mall, featuring a food court and a few offball shops. The Food court is the main attraction - noodles, regional foods, almost nothing over $6.00. 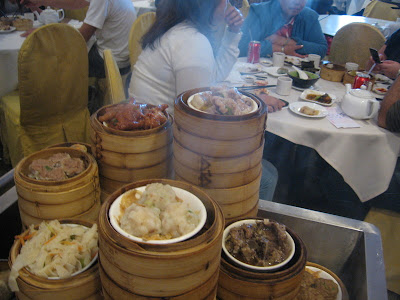 But we were here because my Dad once tried out the Dim Sum lunch at Ocean Jewels Dim Sum Restaurant, across the street from the mall. We got there on a Saturday at lunch - a great time to check out full fledged Chinatown dim sum frenzy, a bad time to cruise for parking. But finally we did it. Rice Noodle Rolls with Shrimp. 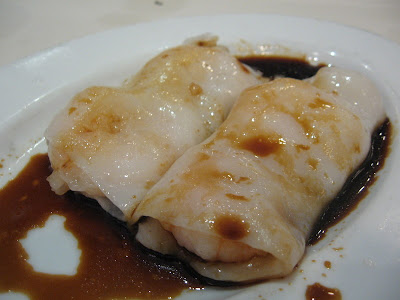 And amid the shiu mai, the turnip cake, the bacon wrapped shrimp balls, the stewed tripe (two kinds,) the har gow, there were the highlight of dim sum for me, the steamed vongole clams in garlic hoisin sauce. 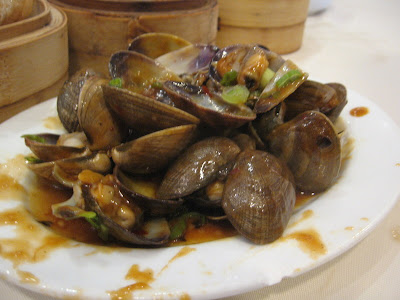 The road to heaven is paved in the crushed shells of Cantonese dim sum clams, believe me. Of course, there is a lot more to find in NYC if you like calssic Cantonese food. Manhatten was next, two days later. We were too lazy to head all the way to the eastern edge of Chinatown by Division St and the Manhatten BVridge, but we hit the nabe near the old remnants of Little Italy and found one of the classic roast duck in the window joints and gave it a shot for lunch. 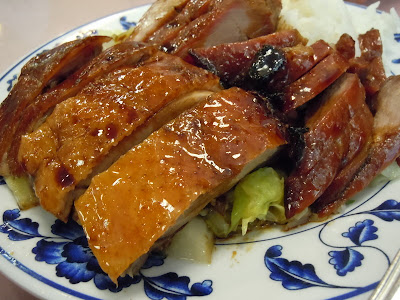 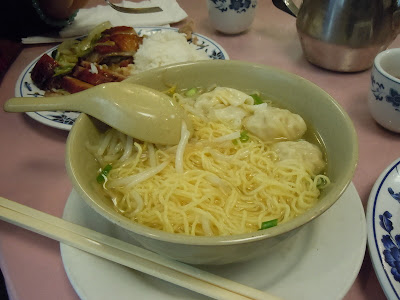 We have no complaints. None at all.
Posted by dumneazu at 10:37 PM