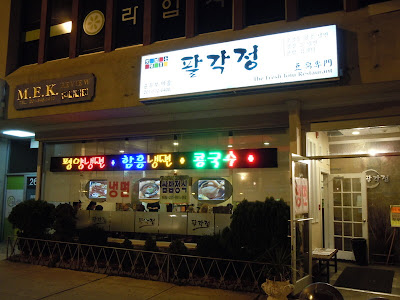 With less than a week to go before we return to Hungary, we have to cover a lot of ground finding things that we can't ever eat in Budapest. Although Hungary actually does have Korean food, it doesn't have Palisades Park, New Jersey, a suburb just across the George Washington Bridge that hosts the densest population of Koreans in North America. The northern New Jersey towns of Fort Lee, Cliffside Park, Leonia, and Teaneck all have large populations of Koreans, but Palisades Park wins on the culinary front. Broad Street, the main drag, is a two mile long taste of Seoul, with all manner of Korean BBQ joints next to catering shops, bakeries, noodle shops, and Korean fried chicken places. 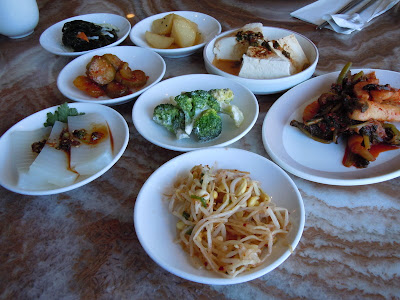 There is a huge Han Ah Rheum Korean shopping mall nearby. Last year I discovered the amazing Dokdo Seafood restaurant (Raw sea squirts! Raw sliced sea cucumber!) on Broad street, but this year we were headed to our favorite soft tofu soup diner in Fort Lee when I remembered a Tofu restaurant in Palisade Park. We decided to try something new. Officially, this is the Pal Gak Jung Restaurant at 268 Broad Avenue - a place often known simply as the Tofu Restaurant, although the menu is a pretty full of all of my korean cravings, from meat to seafood. 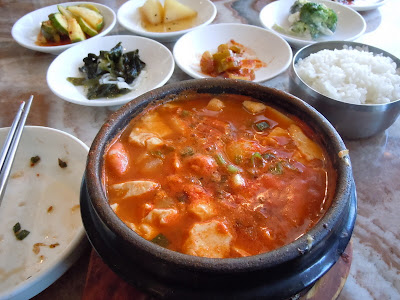 The lunch menus were excellent value, averaging about $10 a lunch, which comes with then obligatory slew of ban chan plates – pickles, small bites, and the ever present kimchee without which it is simply not a Korean meal. I had the soft tofu soup – as good as any I have ever eaten, in which the tofu serves the purpose of noodles, and you can take a spoonful of rice to slurp up the spicy red pepper stock, which in this case contained beef, shrimp, and seafood. Fumie went for the octopus stew on rice lunch plate, which was a huge portion of fresh octopus bathed in a mildly spicy red pepper paste. 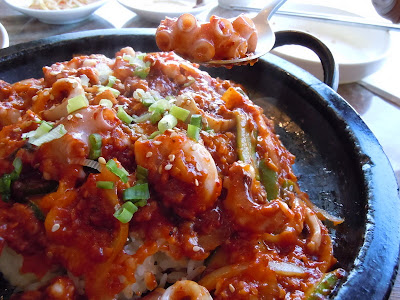 This place was so good that a few days later when our friend Bob Godfried suggested we go out for some Korean food, we jumped at the chance to return to the Pal Gak Jung Tofu Restaurant. We weren't disappointed, Bob knows New York's ethnic music and food scenes inside out – anything diluted for tourists or compromised into unspiciness would immediately earn a rain of opprobrium from the astute Godfried. But no... he liked it. More kimchee banchan,,, and then out came a free plate of cold sliced pork with the skin on and two dipping sauces. This is why it is good to go to places like this late – they realize the goodwill value of dumping the day's banquet leftovers on you. We ordered a bit of everything: Korean seafood pancakes came out nice and crispy, stuffed full of crab and shrimp. 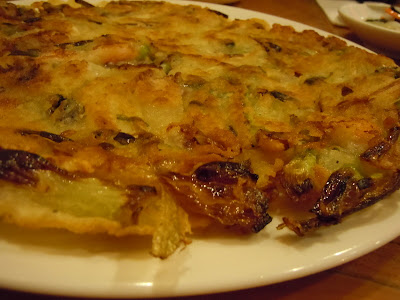 The grilled short ribs here were cut in a special style leaving a nice hunk of bone to gnaw on, but these were some of the tenderest kalbi ribs I ever had, and three of us could not quite finish the whole order. 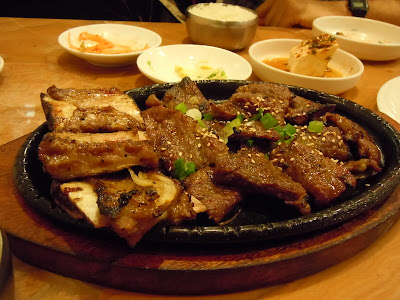 Fumie ordered a red kimchee stew while Bob went for a beef bulgogi stew, both excellent and filling. After our first lunch trip, we went down Broad street to the Parisian Baguette Bakery. 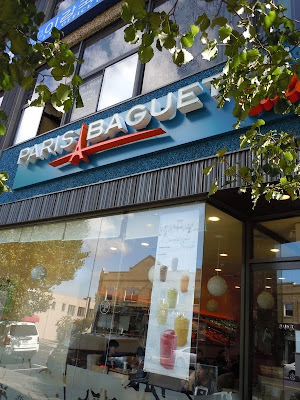 This a is a chain that can be found in any Korean shopping mall or town, and it competes on Broad street with the equally good Shilla Bakery and a few other trendy coffee and bubble tea spost for the very active Korean need to eat high quality Euro-Asian pastries and coffee. Fumie went on a buying spree, setting aside boxes that would serve as her breakfast for the coming days. 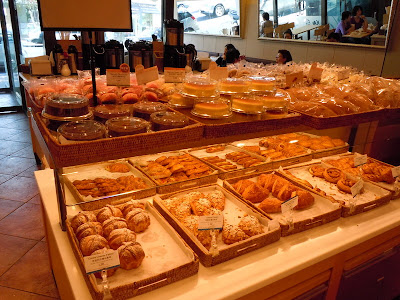 I have an addiction to Korean food... which shouldn't be pricy. Why pay double to eat in Manhattan when you can eat in style in NJ. Well... for some reason, New Jersey absolutely fails in the American restaurant category. There are some pretty bad places to eat out here, but when it comes to certain ethnic communities – Korean, Dominican, and Lebanese come to mind - you can find some of the best food in the USA just off some highway exit tucked into some nondescript ethnic neighborhood. Just ask Mr. Godfried. 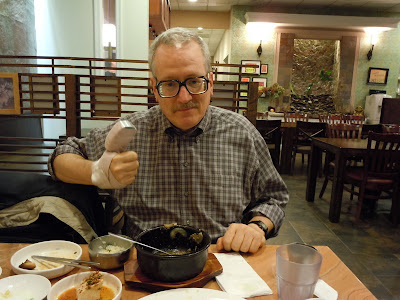 He gave the Tofu Restaurant in Palisades Park a great big thumbs up!
Posted by dumneazu at 11:08 AM

Your Korean restaurant posts actually make me even more jealous than your amazing-music-in-the-middle-of-Transylvania posts. Adopt me?

Good Information. Thank you for sharing and I want to share information about Tandoori Chef which is An authentic North Indian, fine dining restaurant, Tandoori Chef offers Hackensack and the surrounding area a wonderful taste of Indian cuisine.

Good Information. Thank you for sharing and I want to share information about Madras Bistro which offer a wide range of delicious North and South Indian vegetarian dishes. Situated in the heart of Bergen County, Madras Bistro is located in Hackensack, NJ.