Breakfast is for Yourself

There is a Turkish saying emphasizing the importance of breakfast: You make breakfast for yourself, lunch for your friends, and dinner for your enemies. All kinds of breakfast joints exist, from toast sandwhiches (with spicy suçuk sausages sliced between cheese for less than a buck) to elaborate cheese and salad plates being offered by places like the tea kiosk located on the traffic divider in the middle of Karaköy square. But for myself, following a habit picked up in Macedonia and Romania, the best breakfast has got to be işkembe çorba. Tripe soup. 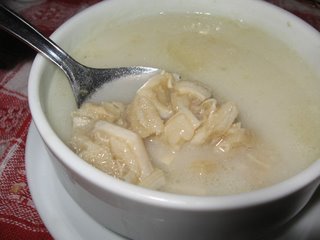 Dress it up with a bit of red pepper and lemon. The widespread theory is that tripe soup either cures hangovers or prepares you for a night of getting a hangover - nobody agrees on which, but tripe soup joints usually are open 24 hours and packed late at night and early morning. One Macedonian Orthodox priest with whom I used to go drinking with in my earlier rough and rowdy days (my kind of Church, the Macedonian Orthodox) would meet me, in full priestly robes and pillbox hat, in the soup house of Bitola every morning at ten and describe a truly crackpot theory of how alchohol ions bonded to the tripe ions (which were mysteriously activated by the addition of pepper and vinegar) to cure one's hangover. I couldn't make stuff like this up, really. 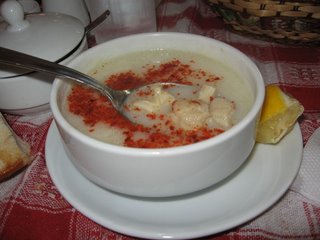 Of course, there are other menu options, mainly kelle-paça çorba, lamb head and feet soup. This one has been dressed with about a kilo of hot pepper. 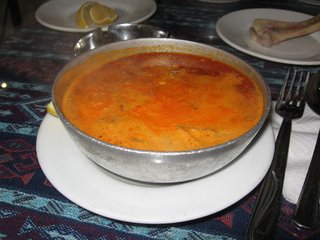 Of course, in a nation of specialists, tripe is bought at special tripe shops. There are different grades and types of tripe, lamb feet, and heads for sale. 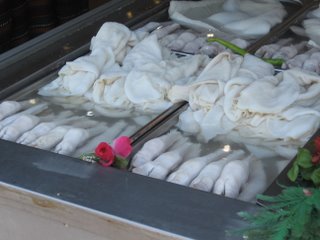 Now, I can hear a lot of you sayıng "Tripe soup for breakfast? Deeeesgusssting. " Fine. Keep you opinions to yourself. Make mine tripe soup. Or head soup. It sure beats oatmeal or muesli.
Posted by dumneazu at 4:39 AM

this goes against tradtional medical advice, everyone knows white castle in the morning is the only thing that can cure hangovers...please.....

The best tripe stew I think is made in Hungary. Here in NY you can get some home made tripe stew in the Hungarian grocery store.