Istanbul cuisine offers certain local specialities, greedily savored bu Istanbullıs and rejected as extremely icky by the rest of Turkey. To an extent, these foods are part of Istanbul's local identity within Turkey- they often reflect origins in the city's Greek past. Eating mussels is one such Istanbul identity food. Kokoreç is another. 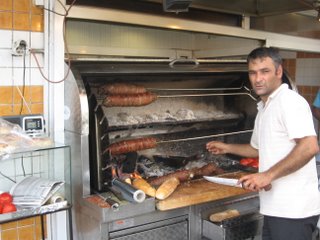 Kokoreç (in its guise as Kokoretsi) is known as one of the dishes cooked worldwide by Greeks to break the Easter Lenten fast. Since Greece became part of the EU, the public sale of kokoretsi has become illegal - there is no way something this gut-happy is going to comply with EU rules - and nowadays Greeks actually come to Istanbul to enjoy a few days of wild festing on intestine sausage. There are hundreds of kokoreç shops around Istanbul, even upscale franchises like Sampiyon Kokoreç, which has even opened a branch in Toronto. My favorite is Kraal Kokoreç in Sirkeci: 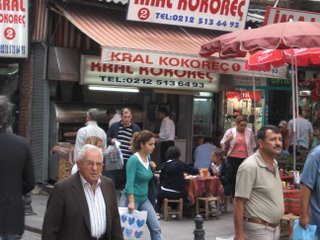 Basically, kokoreç is made by taking cleaned lamb intestines, wrapping them around a spit, and grilling them until they are crusty on the outside, and a juicy, smelly autopsy report on the inside. This is where gastronomy meets forensic pathology in a happy union. 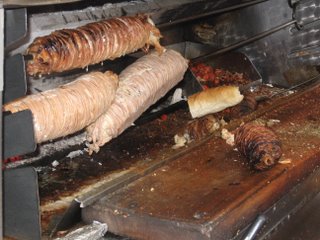 These are what Brenna McCrimmon - and countless other non-fans of kokorec - calls "shit sandwiches." Basically, it is a barbeque version of chitlins. Intestines, carefully (or not so carefully) washed. If you have ever smelled French andouillete (les saucissons avec l'aroma forte du pig bathroom) you know what we are talking about here. You either like them or you don't. I do. Very much. It reminds me of a story my friend told about being a drummer in bluesman T-Bone Walker's band down in the US south back in the 1980s. While standing on line at the BBQ tables in a blues club in Alabama, everybody in the band was choosing ribs, chicken, or fish. T-Bone points at the chitlins hanging above the grill and says "I want dat one. No, the other one. Da Big One. Yeah... cause dat's where da poo is made!" 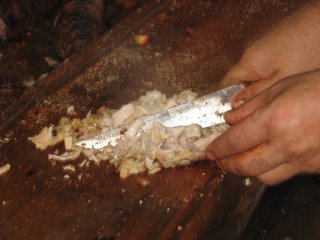 Of course, this isn't the queasiest dish served in Istanbul. Perhaps that honor goes to tantuni: essentially, the little bits sliced off when all the other tasty bits of lamb have been sold off. Add some oregano, red pepper flakes, and lamb weenies, hinies, and ballsies never tasted so good. 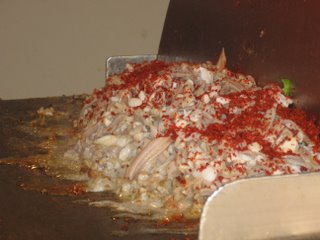