Things in Budapest have been slowly cooling off - the MSZP led government is not stepping down, FIDESZ postponed it's planned weekend "rally," and the skinheads, right-wingers, and ultra football hooligans who have been running amok in the streets after midnight seem to have lost their steam. Hungary sometimes has these tantrums - screaming, throwing its toys around, banging it's national head against the crib - until it falls exhausted into a nice lethargic sleep. Don't expect anything like 1956 - for one thing, no foreign power is occupying Hungary (although those familiar with Magyar rhetoric know that the rightists can talk their way around that, nu? Avode!) For a better comparison of then and now, go to Pestiside. As for me, I am going to relax and look back at the summer and what I ate... 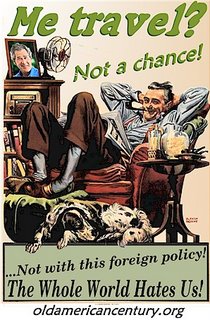 In June, I finally got to take Aron on his first trip to Transylvania. I had to pick up some vioara cu goarne (Romanian trumpet fiddles) from Mircea Rostas and Traian Aredelean in Bratca, and this was Aron's first visit to a Gypsy village. 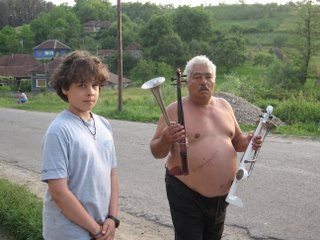 These are essentially resonator fiddles - a metal membrane takes the string vibrations from the brige of the fiddle to the trumpet bell attachted to the body. 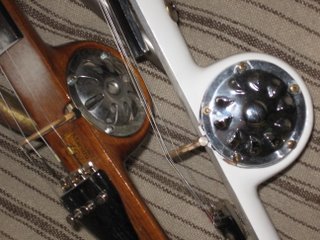 The result is a screaming, loud tone, great for playing in one direction in a noisy environment. At dances or fairs, groups of three or more fiddlers will play while swinging their fiddles around for doppler effects. Just up from Bratca, we stayed at a bungalow camp in Negreni. It was late so dinner was kolbasz grilled on sticks over a fire. Aron mastered the finer points of fly fishing... 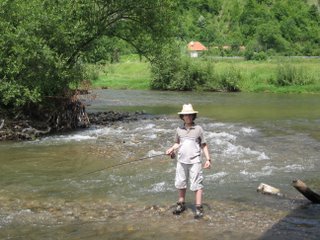 Aron was in pizza heaven. About 20% of Romanians under thirty have worked abroad, mostly in Italy, and mostly in construction and restaurants. One thing they have brought back to Romania is the ability to make a pizza that doesn't resemble a red frisbee that has partially melted on wonderbread (ahhh... Hungary...) As a result, many Romanian towns can rival the Bronx when it comes to pizza. 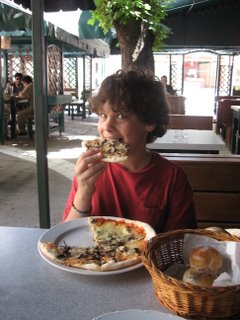 Romania was the tail end of my Atkins phase, and of course, Romania is a very Atkins friendly land. Mici also called mititiei, Romania's answer to köfte, albeit a rather abrupt and garbled answer. Beef neck and mutton ground and grilled, served everywhere with mild, bright yellow mustard and bread. The lunch of the nation. 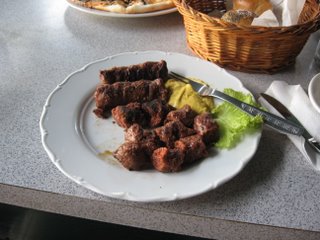