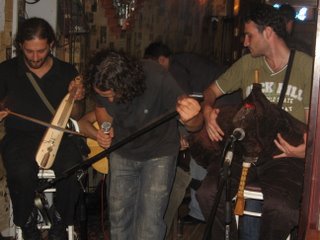 Walking around the back streets of Beyoglu last week, we heard the sounds of wild fiddle and bagpipe, turned a corner, and found a street full of people dancing to the music of Entu Dagakerr, a group of Istanbul musicians from the Laz ethnic group of the eastern Black Sea region (between Rize and Artvin.) Those of you who know my more peculiar musical tastes know that I have - since the age of 17 - been an absolute sucker for the sounds of the kemençe (black sea bottle fiddle). Popular in the eastern Black Sea region, the kemençe is possibly Byzantium's funkiest surviving holdover. A three stringed fiddle held vertically, it plays extremely fast, highly ornamented dance music in asymetrical rythyms. It is also played by the Pontic Greeks who were deported en masse to Greece in 1923: some of the best Black sea music is actually produced in Thessaloniki. To the uninitiated ear, it produces some of the most annoying music ever experienced, which of course, has led to the sounds of kemençe being adopted by Turkish footbal powerhouse team Trabzon: love our football team, love our hyperkinetic fiddle music. 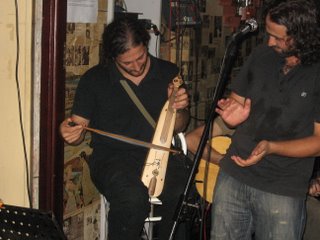 These guys were absolutely the best live music I have heard in Istanbul yet. We followed the band to their next gig, at the Sokak Bar on Mis Sokak. The place was packed with folks from the Black Sea region, and as soon as the band kicked in, the whole house started singing along and dancing. The Black sea style of dancing involves a lot of line dances with vigorous shoulder shaking, hence the name "the hamşi dance" after the movements of the Black Sea anchovy (Turkish: hamşi.) 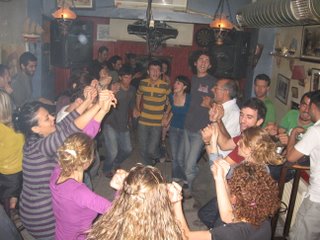 Of course, it wouldn't be a real hamşi dance without inviting the visiting Queen of Little Oily Fish to join in. (Note: The following image complies with federal rules concerning the publication of only "cute" photographs of Fumie at all times.) 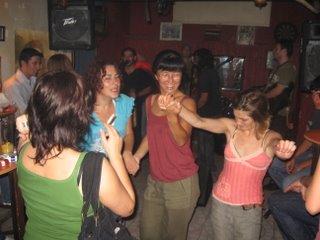 I haven't picked up any CDs yet on this trip, but everybody teels me I have to grab some music by Kazim Koyunçu, described to us as the "Curt Cobain of Black Sea Rock." Koyunçu was a Laz who died from cancer traced to radiation pollution from the Chernobyl nuclear reactor meltdown. There are at least two 24 hour video TV stations broadcasting non-stop Black Sea ethno-rock, and I am still not tired of this stuff. Next to Zydeco, nothing fuses with rock style like Black Sea music... 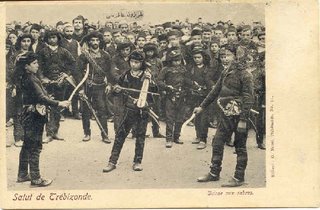