We're back home, just in time for Ramadan! And weird right-wing nutcase street riots! People who get their information about the world from Time and Newsweek think Ramadan (aka Ramazan in Turkish) is a just a grueling month-long Muslim fast. Actually, it is a fast during the daylight hours, followed by typically Turkish indulgence in amazingly tasty good stuff after dark. As soon as the sun goes down you have drummers alerting the public - as depicted on the boxes of Ramazan (the Turkish forRamadan) gift boxes available at the local fancy GIMA supermarket - that it is chow time! 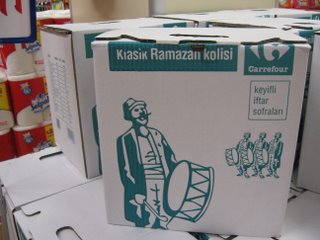 Personally, I like the image of a davul drummer blasting away on the box. During Ramadan drummers (davular) and musicians alert everybody to the fact that "it's chow time!" There were huge Ramadan feast shacks being built in Fatih as we were leaving, in expectation of the late night chow hounds coming to celebrate "the fast." 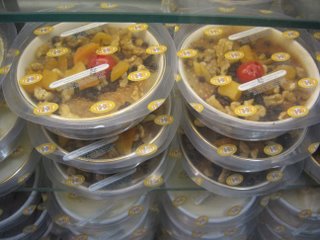 During our last day shopping in Istanbul - ("shopping" means buying little bracelets for US 30 cents) we met a shop keeper who specialized in Uzbek Suzani textiles. This particular guy spoke fluent Romanian... he had studied a couple of years in Bucharest. Turks beat the Dutch in multilingualism. We were able to happily converse in the Wallachian form of Swamp Latin for while, but we didn't buy anything. Fumie is Hungary's #1 Suzani collector and expert, so pretty soon she was in the midst of.... cosplay 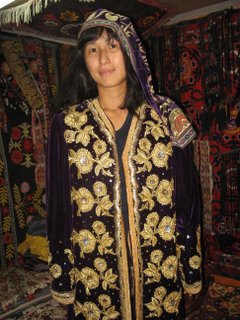 We had to leave today, so Fumie picked up a few pieces of sliced smoked bonito, aka palamut: 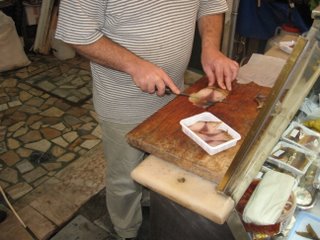 And some dried red mullet eggs encased in wax, the same stuff the Italians worship as bottarga... pretty damn cheap. 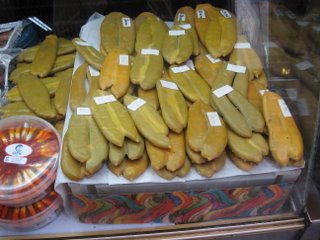 My last meal in Istanbul.... inegol kofte at our favorite place near Tunel: 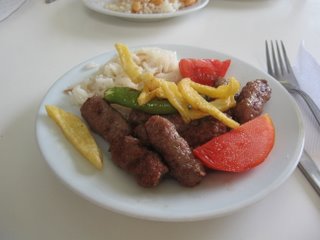 On the plane home, we took a nice take-out order of burek... why deal with crap Malev sandwiches? 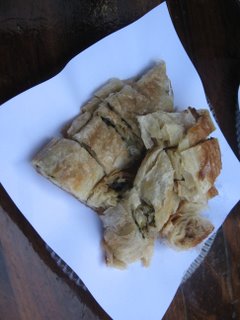 If anybody isinterested, the skinheads in Bpest seem quiet tonite. We'll keep you updated. And we will continue to torture Transylvanians...