I travel a lot - playing tours with my band, doing field research on music - but until this year I had never taken a real vacation in years. Croatia had always been a place where I went overnight to re-enter the EU with a fresh visa. Zagreb isn't fun. Zagreb is like the " Sunday Dinner at Grandma's House" of the Balkans (Serbia is Sunday at your cousin's secret basement playroom where you tell dirty jokes and tie your friends up but then things get out of hand when girls show up and you find your uncle's gun collection and then break into the liquor cabinet and....) Croatia is Yugoslavistan without Gypsies. Gwenyth Paltrow and Jack Nicholson have vacation homes on Hvar. Ewww. Icky. No, Croatia had never been on my destination map. But then Fumie discovered Dalmatia. Dalmatia used to be part of the Venetian Republic, and the Italian influence is strong. And there is fish. 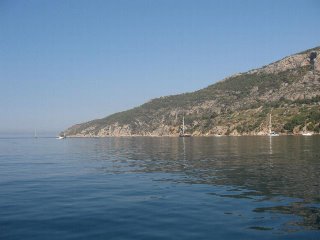 Last spring Whizz Air - one of the budget air lines - made an offer of ten dollar tickets to Split from Budapest. And so, having finished my grueling ten day teaching gig at the Medem Klezmer Workshop in Paris, we were off to Split to sail around the Adriatic on this: 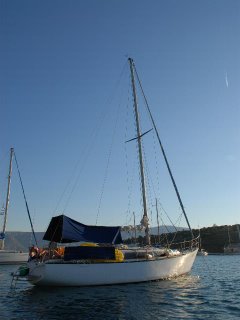 No, I did not sail the ship. No way. I don't drive cars, much less sail ships. Ships, however, are forever connected in my mind to Yugoslavs. The last time I was offered the chance to get on board a self propelled watercraft it was with Emil down in Florida. There was a severe storm warning out and two cases of beer and a bottle or two of Johnny Walker in the boat. I took that as agood reason to pass on getting into the boat. But this 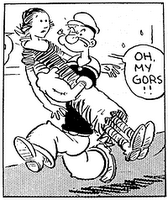 ship was different. This ship is owned by my good buddy Dejan, who - like many Dalmatians - is a merchant seaman who works around the world as a pilot on ships that supply oil platforms. when he comes home to Dalmatia, he lives on his boat. He actually knows his way around a boat. Then one day he met Fumie's best friend Camille in Budapest, and history was made. Camille, who is from Paris, has a "relationship history" that reads like the history of Byzantium - surprisingly many cases of people being hung upside down over smoky fires with their eyes poked out, emotionally speaking... - and so when she met Dejan it was a relief for all her friends. I mean, women are supposed to get swept away when they meet a sailor, right? Finally, she finds a man with a yacht! We like this man. Sure, he has to go to Angola or Brazil every few months to help George Bush get more oil into American SUVs (you heard me right - the company that maintains all the oil platforms is a Bush family company) but when he is at home, Dejan uses wind power for almost all his needs. Life is simple and good when all you need are wind power, fish, a small, nuclear-powered French girlfriend, and a bottle of home brewed Travarica brandy. And maybe another bottle of Travarica. Dejan je moj vodka brat. 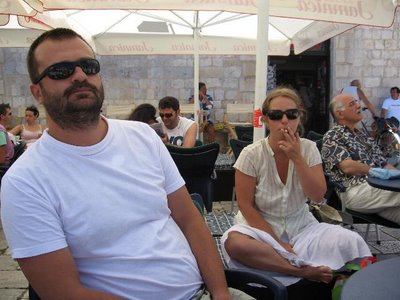 Usually when I get to former Yugoslavistan, the first thing I chow down is a plate of cevapcici - same as köfte, really, only slightly less refined. Served with chopped onions, pepper ajvar, and fries. 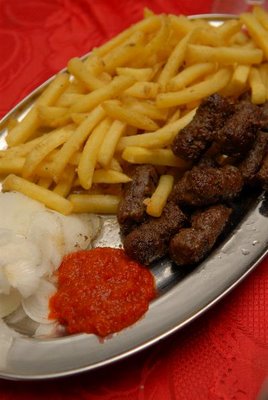 Traveling with Fumie, however, is like traveling with a pet seal. If you want her to stay happy, you have to throw her some fish. A lot of fish. As mentioned before, when Fumie sees shellfish, such as these clams and langoustines, all notions of sharing go flying out the door. These were hers, and hers alone. Others could go near this plate only with her permission.... 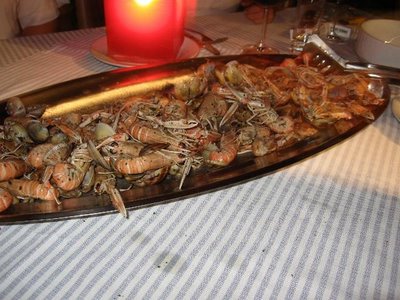 We began our trip in Hvar, where we met Judit, who took the train in from Budapest. Judit had not been outside of Hungary in over a decade, but she made up for it by literally eating every living thing that swam in the Adriatic sea in a week. Never has a Hungarian eaten this much seafood in recorded history. 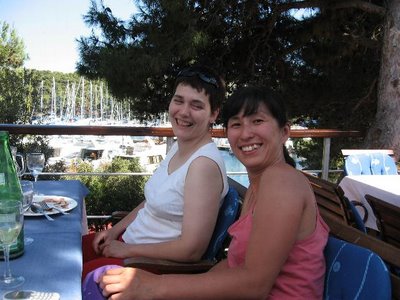 Hvar is the trendy new mother of all tourist islands, but we didn't see any celebrities, only a vast herd of German and Scandinavian touristoids, shod in pink designer flip-flops and devouring ice creams, chugging margaritas and working on future skin melanomas, so we left pretty fast to Sveti Kliment, a small island an hour sail away. Sveti Kliment has a marina and two restaurants. That's it. After the hormone filled disco atmosphere of Hvar it was a genuine relief. The local specialty was squid: 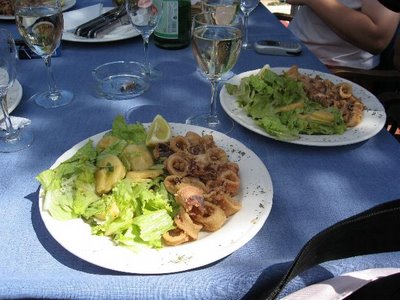 One of our stops was the island of Vis. Vis was the headquarters of Tito's partisan fighters during WWII, and subsequntly was a naval base duuring the Yugoslav years. From Vis the partizans smuggled hundreds of Jews out of Yugoslavia to British occupied Egypt, and it was here that the Allies maintained their only naval base during the Nazi occupation of Yugoslavia. Subsequently, it escaped the massive tourist developement that plagued the Dalmatian coast. 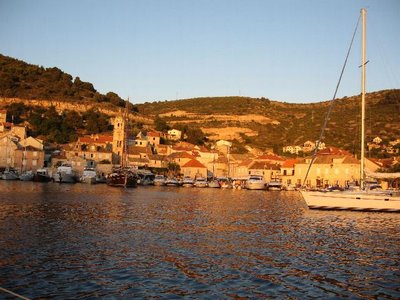 Fumie's birthday party on Vis, at the Pojoda Restaurant. The Pojoda specializes in local home style cooking - not the usual grilled fish and squid. There was seafood rissoto made from barley corns instead of rice, bean soup with a fish based broth, octopus salad, octopus burgers, fish stew... 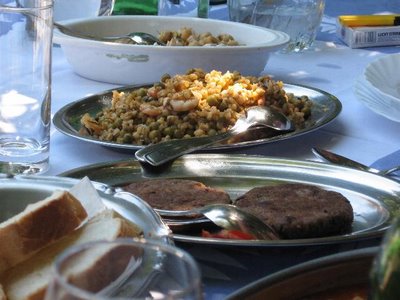 and one very happy Fumie. 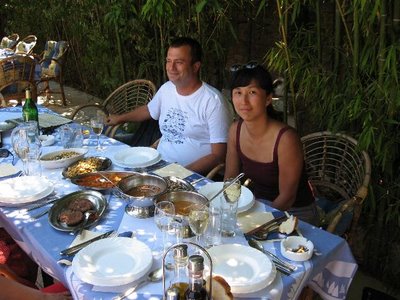 Being close to water, I had to go fishing. Dejan and I had picked up some cheap salt water fishing rods in the Chinese Market in Budapest, and I finally understand why people pay more than twenty bucks for fishing rods. I'm essentially a fly fisherman, but I was raised near the Atlantic ocean, so when I get near salt water, I am fishing for meat. It makes up for all those trout I release. Besides, trout don't taste nearly as good as sea fish. 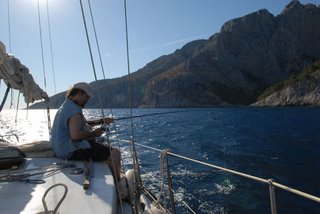 Truth is, we actually did catch enough fish to eat. Most Croatian fishermen go after the big species or schooling fish fish that bring in big money at market, so you rarely saw small harbor fish for sale. The harbors and rocky beach coves, however, were teeming with fish. Using the mighty Fish Base fish identification database (one of the only actually useful things existing on the internet) I was able to identify many of these fish as varieties of sea perch, wrasse, gilthead sea bream, and, well, other little fish that tasted good. 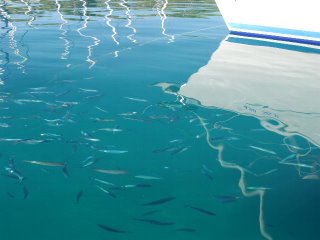 Just look at those gigantic speckled beauties! I am essentially a trout fisherman, so size, or lack of any size at all, doesn't really bother me. Dejan cooked up the catch into a fisherman's stew, which we had with pasta. 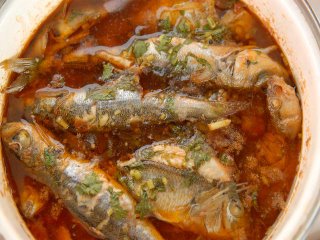 Dejan losing consciousness after eating half a roasted sheep. We had ordered lamb, but the animal that came to our table had definately been lying about its age. Still, meat is meat, and if we hadn't eaten it, we would be liable to the accusation that we were speading vegan tendancies. So we ate it. We had to. Without a full stomache, we wouldn't be able to drink as much travarica as we wanted. Travarica is the local home-brew: plum brandy infused with various island herbs and often flavored with heavy doses of carob. Travarica is a pretty potent drink. It does wonders for digital photography... 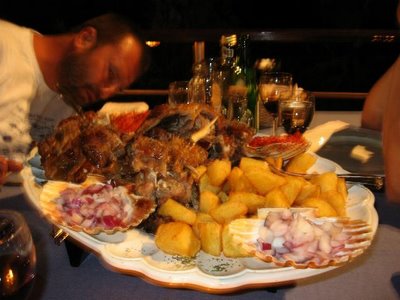 Hi nice blog. Remarkable range of landforms and environments, many of which have been recognized by UNESCO World Heritage listing. The most notable of these are the Great Barrier Reef and the ancient rainforests that extend from Cape York all the way to the New South Wales border.What is procedure for russian visa