While taking a breather from the Entu Dagakerr gig on Saturday night, we met Attila Tuna (Attila is a pretty common Turkish name. Tuna means "Danube" - one of Atilla's ancestors had been the Turkish governor of Vidin province in Bulgaria) a festival promoter who was originally born in Skopje, Macedonia. After a predictable round of "Macedonian Who's Who?" with Attila, Fumie discovered a poster on his Coffee shop for the 3rd Istanbul Fish Festival, organised by Attila. 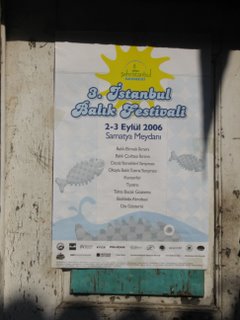 As she usually does when confronted by the word "fish," Fumie began jumping up and down, wildly relating her experiences with various fillets of bonito and mackeral in painstaking detail. Especially the part about eating them raw, something which is shocking and outlandish to Turks. Faced with one of the world's unchallengable champions of bonito eating, Attila graciously invited us to the festival in Samatya Meydane to be members of the jury for the restuarant competition. 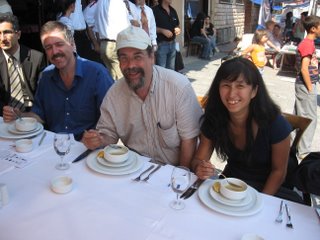 That's the eminent Bob Beer sitting on my right. Bob has lived in Istanbul for about fifteen years and is an American musician (adept at Turkish Alevi bağlama saz and song, as well as Black Sea kemençe) and a astonishingly talented linguist who works as a translator from Turkish (he's now working on Kurdish...) who I connected with via a post on the E-Gullet forums about Turkish cuisine. From an innocent post concerning kokoreç (in which Bob quoted Canadian singer Brenna McCrimmon calling them "shit sandwiches") the two of us have finally come to this uniquely elevated moment in our lives: judging the Istanbul Fish Festival restaurant contest...

First up: fish soup from the Balik Evı fish Restaurant. Light, tasty, not too salty... a definate 8 on the rating scale of 1 to 10. (Note: Please restrain the urge to bite my head off because I can't use proper Turkish spelling for these postings. I'll edit them when I can. I promise.) 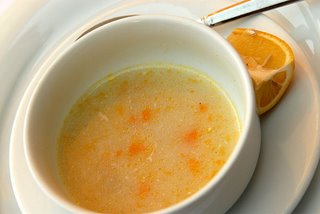 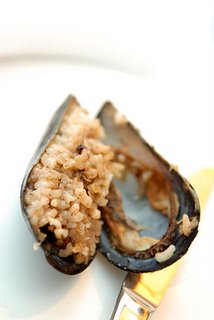 Balik Evı's Octopus salad... not octopussy enough for Bob Beer, I rated it as a child-friendly 7 (no visable suckers, no purple skin coloring) while Fumie simply chowed down both her and my servings. As Alan Bern once asked me "Does your Japanese girlfriend also think she is the Owner of All The Seafood In The Universe?" Yes, Alan. We who live with Japanese women have no right whatsoever to the seafood on our plates. It all belongs to them. 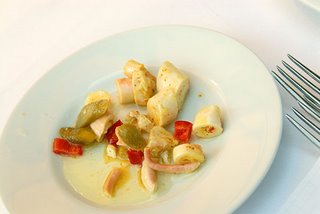 The mayor of Fatih District and some city councellors tucking very judgementally into some fish. 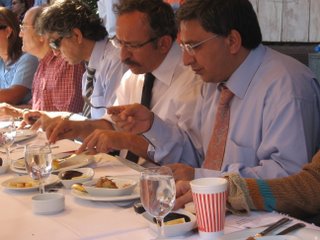 I was desparately hoping that some resturant owner would slip me some bribes to vote in his favor. 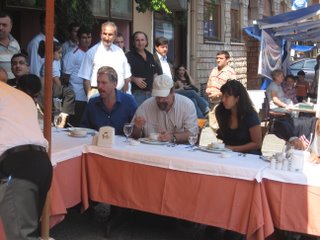 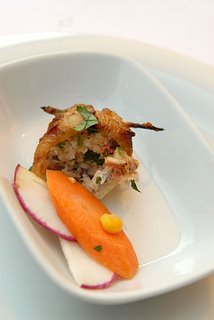 Fish cigara börek from Capana Resturant. This was the highpoint for me... lots of capers, cripsy crunchy... 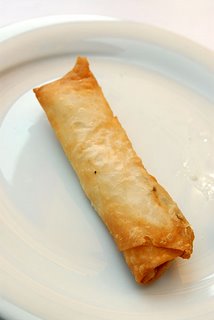 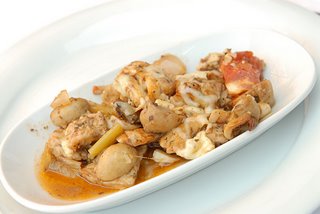 Bonito with shrimp sauce from the Balik Evı 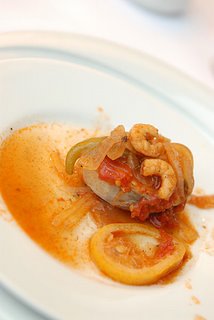 Seafood stuffed into a fried red pepper from Kuleli Restaurant. To much red pepper flavor overpowering the fish. Didn't do it for me. 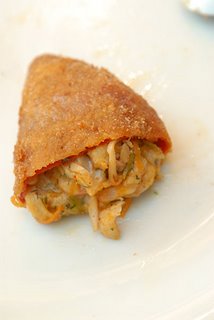 Finally a pair of dishes by Ayşe, a young woman who gave a tearful speech thanking the organizers for allowing her to participate in the festival Ayşe is a culinary student, and damn, her dishes beat all the other restuarant chefs back to the baitshop. Her fish stew (balik kavurma) managed to take mackeral and fresh anchovies and create a light dish without the oily fishy flavor that Fumie so loves. 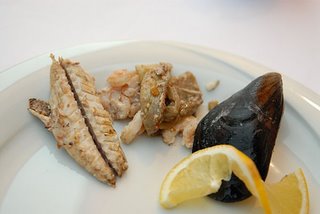 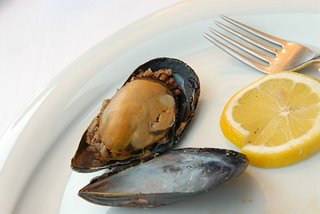 Bob Beer and organizer Attila Tuna conferring over the results. Unfortunately, none of the restaurant owners took the opportunity of offering us any bribes, so that the voting was uninterestingly dull and honest. Obviously, we are not in Hungary any more. 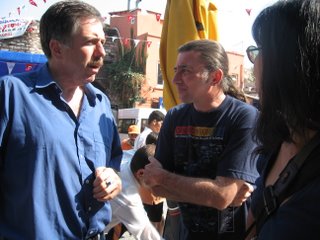 Afterwards, a concert by Entu Dagakerr. this crowd was not comprised of folks from the Black Sea, and they sat politely while the band played and sang... in Laz. People smiled and applauded, but no dancing. But it was a bit like watching a bluegrass band play a Jewish Old Age home in Brooklyn. Aren't those hillbillies quaint and authentic. Can't understand a word they are saying, though. They probably support Trabzon.. It must be the same feeling that I get when singing in Yiddish to audiences that have no clue as to what I am talking about. When they finished, the MC announced that "next up, a pop band that sings in Turkish!" 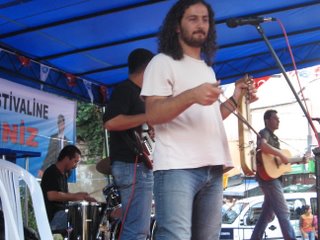 I still don't know who won the contest. In my opinion, top points go to the Balik Evi Restaurant with Capana a close second - the börek ruled, and I will be going back to Samatya for more fish. Possibly too much more fish. Samatya Meydane is easy to reach by taking the suburban metro train from Sirkeci Train station to the Koça Mustafa Pasa stop along the ocean, about ten minutes from downtown. Walk under the overpass and you are in the square. Samaya Meydane is cheaper and more comfortably local than Kumkapı or Kadiköy for fish resturants, with a lot of Armenian and Greek chrches hidden in the back streets. 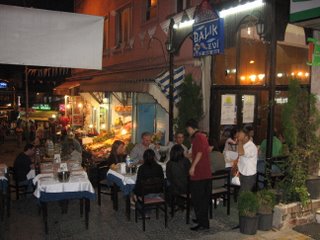 fish contest, eh, i won the beauty pagent on wonderama in 1968, and went on to hate fish the rest of my life, on the other hand, no one does halibut like a crazed jewish chef, buti do tend to dress it in red tafita and garnish it with a red sash and matching shoes.....