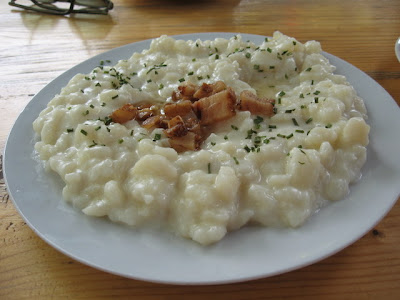 Hungarian isn't what most folks would consider an easy language. Linguists usually count it among the most difficult languages to really master, and when I was studying anthropological linguistics other linguists usually counted it among the most difficult languages - and therefore it was one of those everybody wanted to learn. Informally, the list of difficulty ran thus: Hungarian (because of so few recognizable Indo-European cognates and a deeply inflected syntax,) Kekchi Maya (having studied Quiche Maya I can only imagine why Kekchi would be harder...) Japanese (actually not that difficult except that it utilizes three writing systems simultaneously and is rife with "levels" of speaker formality) and Mohawk (an incredible pronoun system.) So it always comes as a surprise to me, or any speaker of Hungarian, when we hear somebody who is not a native speaker of Hungarian speak Hungarian at all... especially with mistakes. In Slovakia, however, you meet lots of people - speakers of Slovak - who are able to communicate in various levels of Hungarian, from totally broken to fluent. 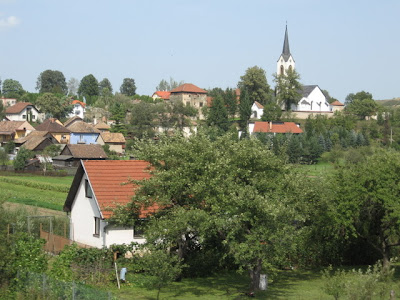 Slovakia was a part of the Hungarian kindgdom for 900 years, and during the late 19th century Austro-Hungarian era was subject to a strong Hungarian-centric education program, during which time all schools and all administrative life were conducted in Hungarian. After the emergence of a Czechoslovak state in 1918, the use of Hungarian was restricted to those areas where Magyars formed a large ethnic minority. Since the "velvet divorce" granted Slovakia independance in 1990, the Slovak language has finally come into its own... [photo not my own...] 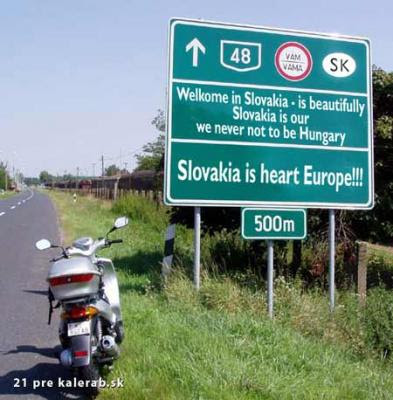 Nevertheless, Slovaks often know a lot of Hungarian. Lots of them went to schools with Hungarians, lots of them come from areas with large Hungarian minorities, and most important... lots of the Slovak guys really like Hungarian girls. And so while we were in Slovakia I heard quite a lot of Slovak conversations where, when somebody was quoting a Hungarian, the language would switch to Hungarian... and everybody understood. Hungarian phrases were popped into Slovak sentences in the way New Yorkers pepper their speech with bits of Spanish or Yiddish. I met one fisherman while we were there who spoke quite good Hungarian, but he was a Slovak, and from a region with very few Magyar villages - he'd learned it during his army service chasing local Magyar girls. 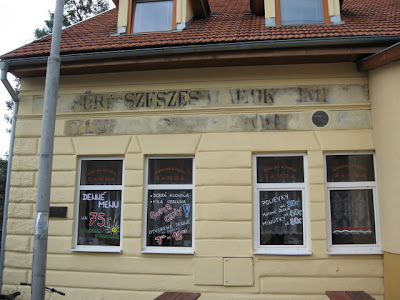 Above is an old shop - across from the train station in Liptovsky Mikulas - that proudly displays its old Hapsburg era Hungarian orgins - the sign advertises "Alchoholic Drinks." Incidentally, this is one of Europe's main meccas of urban trout fishing - the Vah runs straight through it, a premier fly fishing water through and through, if you don't mind fishing in town. Get your day licence at the main hotels. 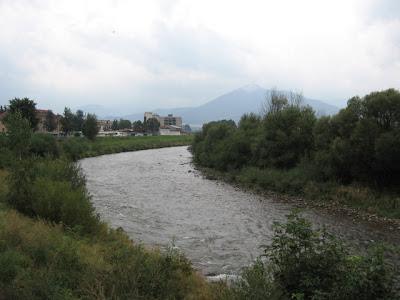 In between the two world wars, Hungarian education was banned in Czechoslovakia. Jews, however, were allowed to choose their language of education, which at that time in East Europe usually meant choosing between a Yiddish school system or a Hebrew one. The Czechoslovakian Jewish community chose to educate their children in Hungarian. Subsequently, during the inter war years, many non-Jewish Hungarians living in Slovakia chose to send their children to Jewish schools. 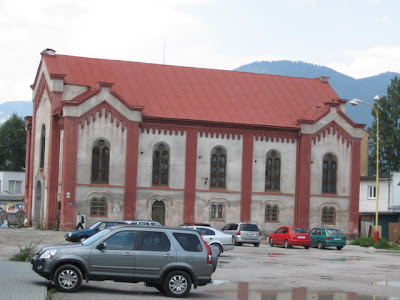 The sad result is, that with the destuction of Slovakia's strongly Hungarian language-identified Jewish community, Hungarian language education also suffered - after the war it would be years before Hungarian language high schools reopened in Slovakia. Today, the Jewish presence is represented in empty synogogues such as that in Ruzomberok, above, and in Liptovsky Mikulas, below. 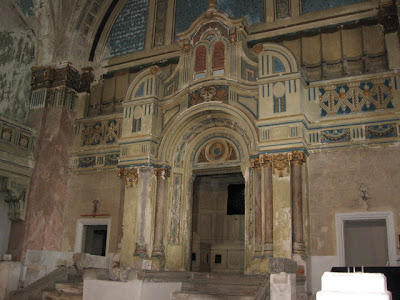 Today Slovakia boasts East Eutrope's fastest growing economy. During the first ten post communist years the country stagnated under the government of communist-turned-nationalist Vladimir Meciar. When Meciar left office a new generation of Slovak leadership - educated in the west and up on the latest economic theories - took the reins. A combination of smart economists, flat taxes (in a small country) and generous benefits for foreign investors has suddenly trust Slovakia from the backwater of the post 1989 East European changes to the forefront. Unemployment is expected to disappear in three years, forcing the importation of labor. Towns that were once dusty backwaters, like my beloved Ruzemberok, are becoming smart regional investment centers, and tidying up their downtown areas. 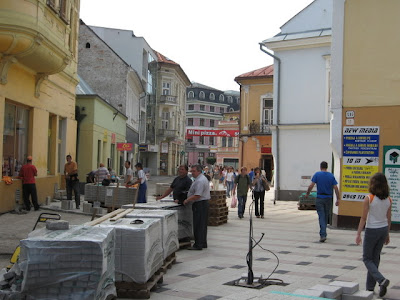 Which brings us to Globalization. Will it destroy Slovakia? the Answer is resounding: No! Not as long as Slovakia has Kofola to defend it! [OK. A shot of borovicka doesn't hurt either...] 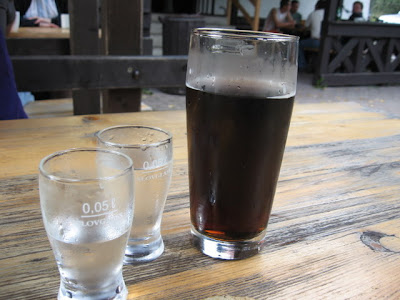 Kofola is Slovakia's contribution to unique, weird, what the fugg edible drink items in the world. Kofola is Slovakia's answer to near-beer. It is some kind of non-alcoholic brewed malt drink, served on tap in bars, and marketed in the same manner as other big brand beers. 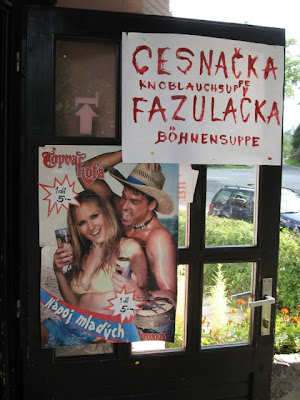 It is really quite good... in a non-intoxicating way. People who have to drive home from bars feel fine hanging out over a cold mug of Kofola. Truck drivers drink it with lunch at roadhouses. It is actually quite good. About half as sweet as a cola, and not as carbonated. My Hungarian clarinetist Janos, who is addicted to this stuff, calls it "Somewhere between coffee and beer." If Slovakia keeps going down the road to success as it has so far, this stuff may well knock Coke and Pepsi out of the twenty first century. 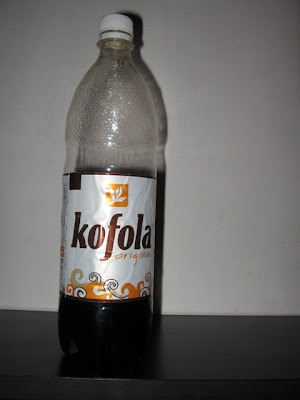 Kofola sucks. As does Trencin.

Hey isn't Coke Black the same stuff? I never tried it when I was there so I can't compare.

"Slovakia was a part of the Hungarian kindgdom for 900 years..."
Actually it isn't quite right, 'cause Hungary always had that land as a part of a Big Hungary long ago, longer than 900 years. Slovakia was only lucky after the II. World War having a little piece of Hungary due to Trianon. That all explaines, why are so many Hungarian people still living on former Hungarian territories.

Dear Blogger, please get familiar with history and consider the facts before you write a blog full of ...
Thanx

蔥爆牛肉Vivian said...
This comment has been removed by a blog administrator.
9:06 PM

Kofola - I remember that crap from when I was a kid. But hey, if you like it, better you than me:)