Brook Trout on the Revuca 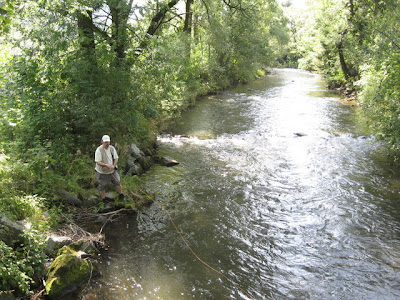 Feeling a bit defeatist after our efforts fishing on the Vah and Bela rivers in Slovakia, Fumie and I headed a few kilometers west to try our luck on the small river that has become our "home stream" - the Revuca, which feeds into the Vah in the town of Ruzemberok. The river's headwaters start up in the mountains near the Donovaly ski resort, and the first few kilometers of headwater are off limits to fishermen as a natural breeding ground for trout and greyling. The river gets stocked as well, but about half of the fish are wild holdover trout who have seen many a fly and are not about to give themselves up easily. 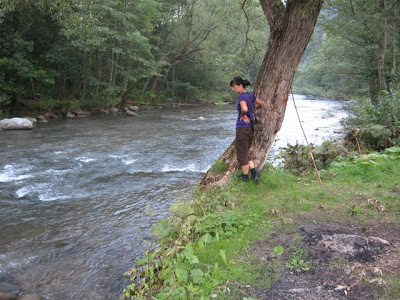 Although small, I have seen some very large trout and greyling come out of the Revuca. (Notice how I did not state "I have caught some very large....") The Revuca is the Mecca of the Hungarian fly fisherman, mainly because it is just three to four hours drive straight north of Budapest, and you can usually find at least some evidence of Hungarians somewhere along the river banks... 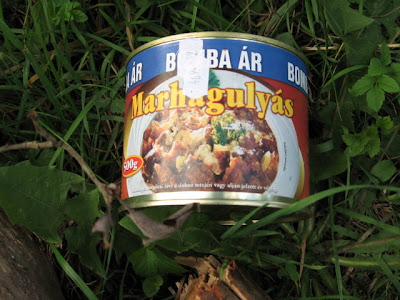 This is the first time we hit the Revuca without a car. In order to get a day fishing permit for the Revuca you have to go into Ruzemberok. As usual, while you can buy a Slovak state licence at the city hall or any fishing shop, you have to do some footwork for the daily permits. I'll spill the beans - go to Mrs. P. Pavelkova, K.F. Palmu 44, Na Satelitoch. It's way up on the hill. Take a cab. Permits cost 500 Slovak Krn. a day. We then took the car to our favorite Guest House/Lumberjack bar, the Bodega, in the village of Podsucha. The entire cab fare was the same as what it would cost us to come home to Zuglo from downtown Budapest. 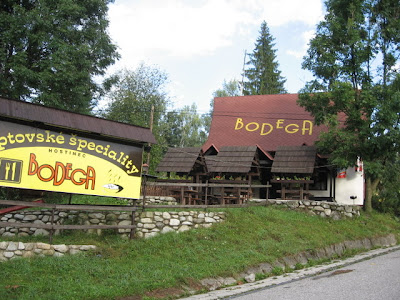 Sure, you can stay at the best hotels in Europe, but why would you want to? The Bodega is across the street from one of Europe's best trout streams. This is our idea of a summer holiday. Rooms are about 10 EU a night, and it may well be the best roadhouse food in Slovakia. Definately the cheapest. Stewed beef, cabbage sauce, and steamed bread dumplings.... 3 EU. 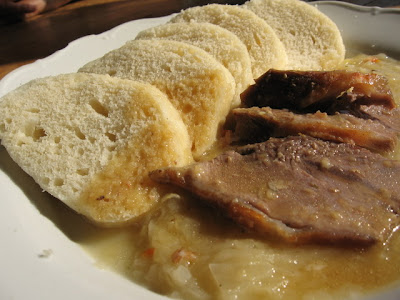 A local specialty is Liptovsky droby. On our last trip, this was a classic hurka, just like a nice greasy Hungarian liver and rice sausage, a less spicy version of Louisiana anadouille sausage. This time it was stuffed with some kind of potato and semolina mixture, more like a Jewish stuffed derma. 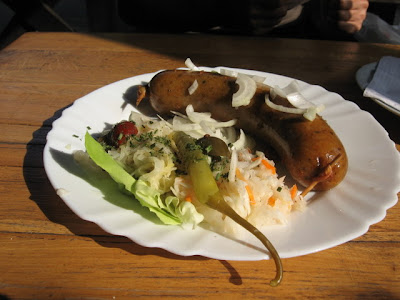 The Revuca has the advantage of being a small stream - you can concentrate on specific pools and pockets and get a sense of where the fish are. In the summer, it is also not difficult to wade without rubber boots. The stream is home to native grayling... and Fumie made the first catch. 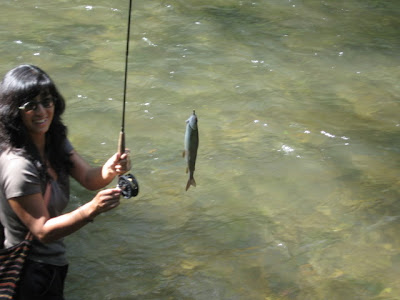 Actually, Fumie made the second and third catch... the list could go on... she's getting pretty good at fly fishing. Oddly enough, she only uses two fly patterns, neither of which resemble anything actually swimming around in the water. One pattern is the old british Red Tag, a peacock herl/brown hackle dry fly with a bit of red yarn for a tail. 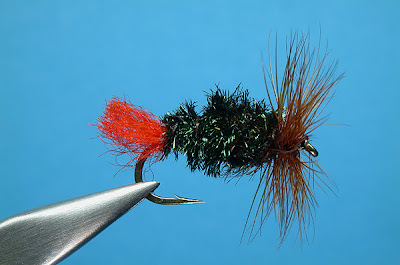 The others are variants of what she has named the "Dancing Queen" nymph - a gold bead head, thin shiny bronze flash dubbing with a bright red or green wool tail. And she is not flexible. She uses no other flies. I know - from scientific examination of the entomological literature regarding Salmo trutta morpha fario - about what brown trout eat. I tie flies and use about ten basic pattern variations to imitate various stream insects. Fumie went to Art School and chooses her flies based on that. But she catches fish. 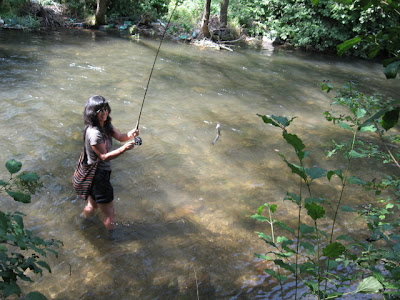 Since we had not gone out yet this year, we were pretty rusty up in Hradok, but by the time we got to the Revuca we had our game on - no more messy casts, no more scaring fish. Well, it worked for Fumie, at least. 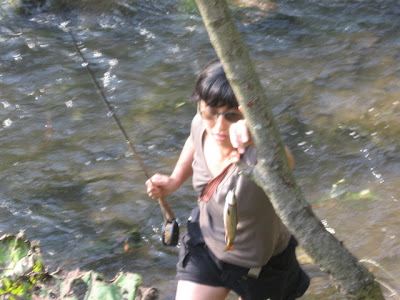 Finally, about six PM on our last day, I hooked a trout just downstream from the spot shown below. I was drifting a small size 16 olive Goldbead Hare's Ear nymph across stream and felt a hit. But it didn't shudder and shake like a brown trout, and it didn't have the six-inches-of-steel aerodynamic resistance of a small grayling. 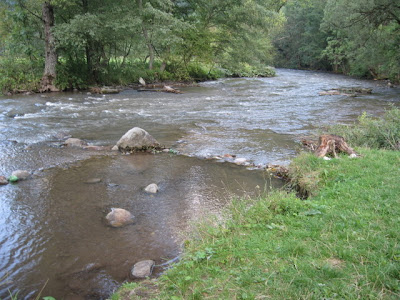 Finally, a frigging fish! The first (and only) of the year! I get to shore and, taking care not to handle the fish (I don't kill my catch. I try not to handle them or take it out of the water before releasing it from the barbless hook) It is a huge surprise. This is a Brook Trout. Salvelinus fontinalis. It is native to North America and quite rare to find in Europe - although there is something similar called saibling in the Alps. What is it doing in Slovakia? 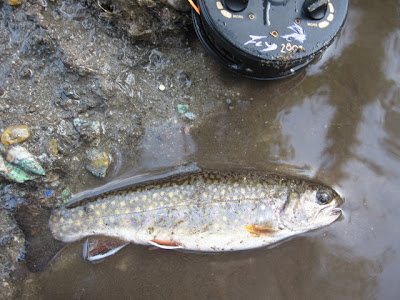 My guess is that Slovakia is experimenting with stocking brookies. The Revuca used to stock a lot of non-native rainbow trout, big dumb hunks of willing fly gulpers to keep the local freezers stocked full of dinner. But rainbows can compete with natives for food, and tend to migrate upstream in the spring to breed, which can seriously hurt the populations of native brown trout fingerlings (brownies breed in the fall.) Over the last two years I have caught fewer and fewer rainbows in the Revuca. At first I thought this might be an omble, a European Char, but they usually need a deep lake to breed. I know of no saibling in Slovakia, although they exist in Austria and in Transylvania. If this is true, I may have a brookie stream only three hours north of me. Hallelujah! My favorite fish!
Posted by dumneazu at 9:24 AM

Thanks a bunch for the flyfishing posts! I just got back from a trip to Slovakia in June and I was really wondering about the fishing there. I can't wait to go back.

Interesting site and stories about your adventures---I would like to visit my daughter in Liptovsky Mikulas next spring and need help and advice re: flyfishing, English speaking guide etc., etc.while there.
Thank You,
Richard