Veszprém: Home Town Away From Home, Away from Home. 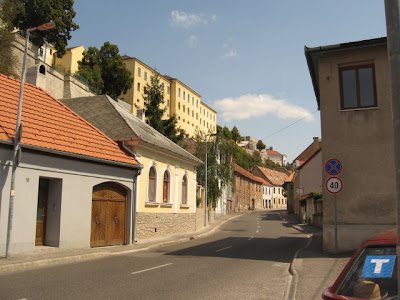 In Hungarian the country is divided into two parts: Budapest (the capital) and the videk: the countryside, whether it is a town or a farm on the plains, it is all the countryside. Most Budapest residents have some connection to the great out-there, and I'm no exception. My Mom was born in Veszprém, a small but significant town located in the Bakony hill country just north of Lake Balaton. 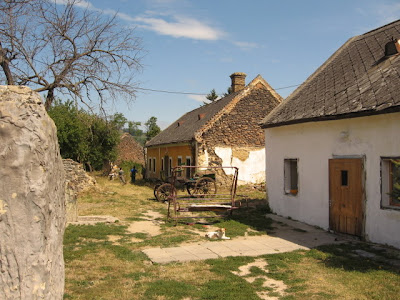 Veszprém is where I came to know Hungary as a kid visiting my Mother's relatives. Her three older brothers, Ferenc, Karoly, and Jozsef all stayed in Veszprém while the oldest sister, Etus, moved to Budapest. 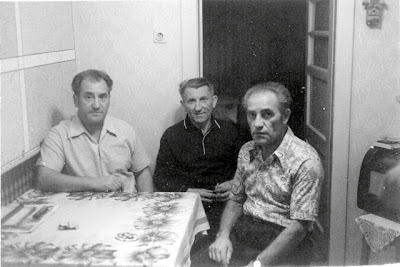 I was just passing through on my way from the Kapolcs festival back to Budapest, so I had to pass on seeing the 43,284 other relatives and just pop in my cousins Bandi and Feri, two of the sons of my Mom's oldest brother Ferenc Grosz. 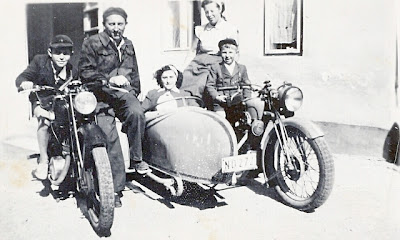 Feri bacsi was the native genius of the Grosz kids - he steadfastly refused to adapt to the communist economic mode, and was one of the famous mesterek of Veszprém. A mester (i.e. master worker) was somebody who, for a seriously large tax fee to the socialist state - worked privately for himself, and not as an employee of the state. People preferred to hire a private mester to fix their car or tile their bathroom than accept the cheaper - but lower standard - work performed by estate employees. Uncle Feri was an inventor as well, producing farming machines, and especially homemade automobiles (sometimes made out of - I kid you not - plywood. Below is Uncle Feri standing besides one of his home made cars in an old magazine featuring "Home Made cars of the 1950s. Back then, one simply could not buy a private auto in Hungary. You had to make one. ) 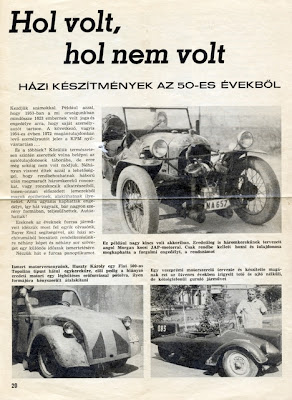 Feri was famous for his cobbled together motorcycles, and just about anything that consumers could not otherwise find under the communist supply system.Loyal customers traded labor and materials for repair credits and built him the first private Auto repair workshop in Veszprém around 1970. His younger son, my cousin Bandi, carries on the tradition at the old house, rebuilding computers, repairing motorcycles, bicycles, and just about everything else he gets his hands on. 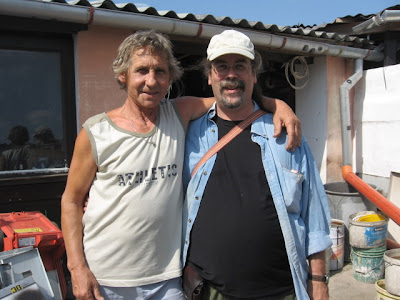 Bandi's oldest brother, Feri, also keeps the mester tradition going, by being Veszprém's prime auto doctor. If all the other auto repair places fail to figure out what is wrong with your jalopy, it eventually winds up in Feri's front yard. Feri's acumen for diagnosing car problems is legendary - some say he can analyse a transmission problem simply by smell. 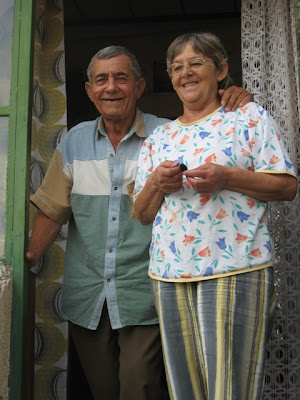 Feri has suffered from some degenerative nerve disease for years, and although he can hardly walk anymore that doesn't stop him from directing a crew of young grease monkeys to crawl underneath the chassis temselves while he gives orders. When I was a kid, Feri used to take me around town on the back of his motorcycle... here is Feri and his wife Babi in younger years. 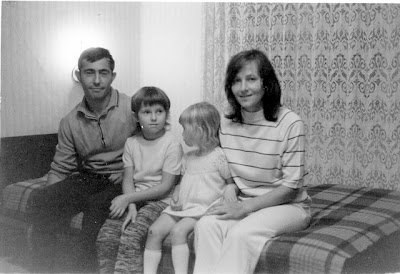 Veszprém is famous for the drawling accent spoken by old time residents of the town - a dialect that is apparently dying out as young people accustom their speech to TV and media - but my family are the hardest of the hardcore when it comes to dialect maintainance. Veszprém old timers speak slowly, and with a broad "ahh" sound for most short Hungarian vowels, so that their speech comes out sounding strangely medeival. 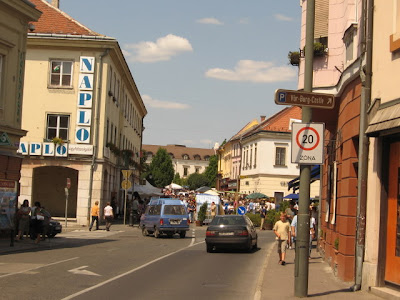 Fumie could hardly understand a thing any of my family said to her, and Fumie has actually been able to converse with North Moldavian Csangos. Feri even went so far as to make fun of those people who say "Veszprém" with all those "e" sounds... it is supposed to be pronounced "Vashprom." Back in the 70s, there was still a lot of folk music being played in the town... such as my Uncle Feri, who played mouth harmonica, mostly soldiers tunes and old time dances from the 1930s. 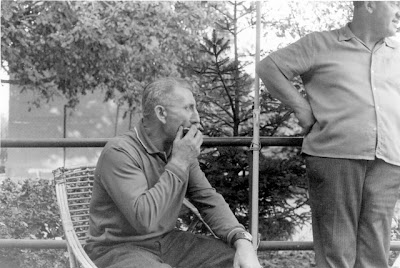 My Uncle Jozsi (standing next to Feri... he was a gret singer when he had some wine in him, and eventually my friend Tobak Ferenc, the bagpiper, collected dozens of lost Hungarian bagpipe songs from him) would have his brothers over every week for some wine and food, and then invite other neighbors over, like the one who played citera and eventually taught me how to play. 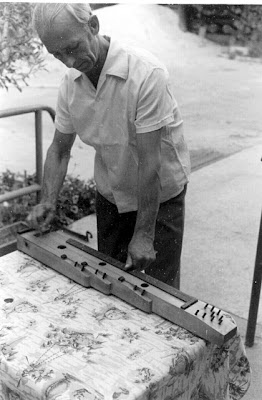 A word about food and wine - Budapest, strikingly, sucks when compared to the countryside cuisine. At least in Veszprém, which attracts thousands of vacationers from the Balaton resorts any time the summer skies turn to rain. This means the restaurant business is strong and healthy, and definately better than anything in Budapest for half the price. 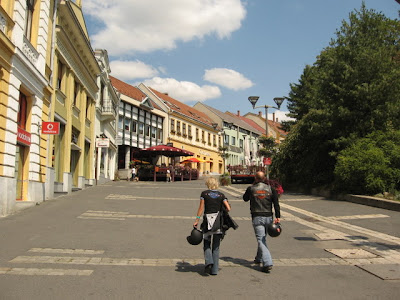 Of course, being located just north of a large wine growing area has something to do with this, as well as the fact that the town is doing rather well economically compared to a lot of other small Hungarian towns. But we ate well for about half the price we would in Budapest - bigger portions, local specialities, good service, and none of the let-down or rip-off we associate with eating out in Budapest. Steak and mushrooms served on a bed of homemade galuska dumplings? Five bucks. 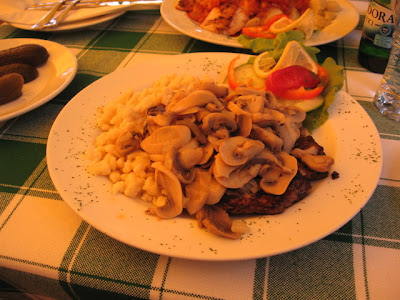 Email ThisBlogThis!Share to TwitterShare to FacebookShare to Pinterest
Labels: Hungary

Hey Bob. it was a real "going down memory lane" moment to see those Vashprom pictures. And I LOVED the newspaper clipping of Feribacsi's car. How ya doin?

Hi Bob, my grandparents are from that area. Does the name Lukacsi or Koteles sound familiar. Actually doing family tree stuff and trying to find out anything about the ones that are still there. Love the pictures! Thanks for sharing AJ