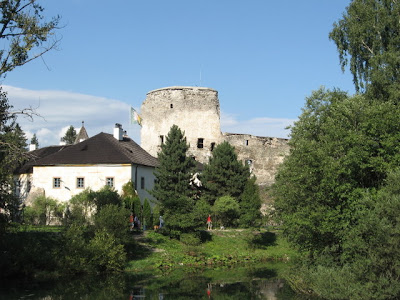 We took an actual vacation last week and ran up to the high Carpathian region of Liptov in Slovakia to do a few days of trout and greyling fishing. Few know this about me: I have always been a fanatic fly fisherman, and when I moved to Hungary I gave up fishing for the better part of a decade. Hungarians fish for carp and various carplike suckers and chubs that are the kinds of fish that we in the US used to poison lakes to be rid of. There are a few streams in Hungary that can maintain a trout population, but presently two of them (the Szinva and Garadna, near Miskolc) are out of commission (pollution and flood/drought damage respectively) and so it makes better sense to slip over the border to Slovakia, which is home to lots of amazingly healthy, clean mountain rivers flowing down from the High Tatras. 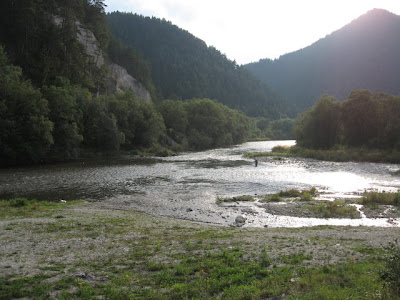 We started out by taking the train from Budapest to Liptovsky Hradok, a small lumberjack town located at the confluence of the Vah (Vag in Hungarian) and Bela Rivers. Two entirely different types of rivers withing ten minutes walk of each other, located in a friendly small town on a train line. Just the thing for somebody with no automobile. 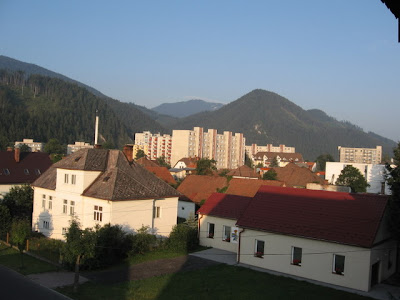 We stayed our first day in the fabulously named Hotel Smrek. There's nothing that says Liptov quality like Smrek. I can imagine the regional planning commitee sitting down to a marketing discussion... "What should we call the new hotel? I kind of like 'Hotel Paradise'... well, there's also the option of naming it the 'Hotel Mountain View'.... no, it's already been decided. We're going with HOTEL SMREK!" First things first... we needed fishing lisences. This is never easy in Europe. In Slovakia you need a national licence (ribarsky listok) which is available by stomping into any ciy hall and wandering around looking stupid while muttering "ribarsky listok?" to whatever representative of the human species you meet in the hallways. Well, this worked for us. City hall was just around the corner from the Smrek... luckily, our required daily licences for the individual trout streams could be had just across the street from the Smrek at this paper store. 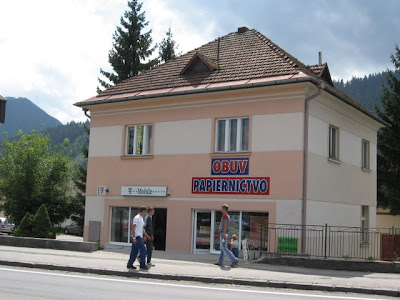 And now was time for lunch... The Smrek was the main downtown eatery in Hradok, but in Slovakia food prices are much lower than in Hungary, and although the Slovak culinary tradition isn't exactly adventurous, it is good, honest stick-to-your-ribs peasant food and even in a hotel you won't pay more than five bucks for a meal. 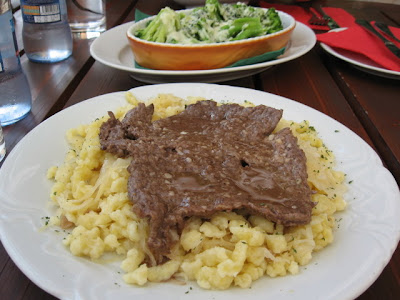 The Smrek Special, the only dish in the world named "Smrek Special." Super garlicified stewed beef on top of sour cabbage over a plate of flour dumplings. Absolutely smrekolicious! Another dish you can find in every Slovak restaurant is some take on halushky, dumplings with melted sheep cheese and bacon, or in this case, sauteed sausage. Interestinngly, the potato based dumpling called halushky in Slovak is called sztrapacska in Hungarian, whicle the common Hungarian flour-based galuska is called strapacky in Slovak... 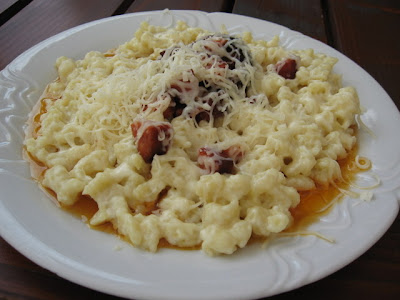 August isn't the best time to fly fish - the mid summer heat waves tend to put coldwater trout off their feed - but the waters here were fed by high mountain runoff. In fact, since we hadn't brought waders, we ran into the brick wall of wading the Bela - it was painfully cold to walk into the water in only sneakers and shorts. Luckily, the Vah ran behind the town and had trimmed banks allowing us to hike a few kilometers upstream and still cast from the bank. 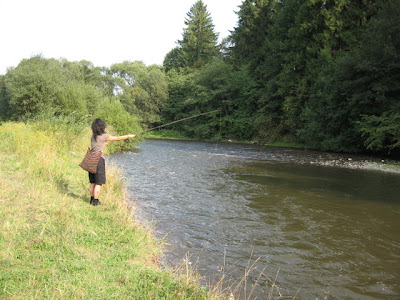 Later we moved over to the even cheaper Hotel Pod Sklanou, located on ulica Hradska 37, where a room was even cheaper and only a three minute walk from the alpine river Bela. Here we met a couple of Romanian fly fishermen from Sibiu who were delightful to talk to... in Romanian. 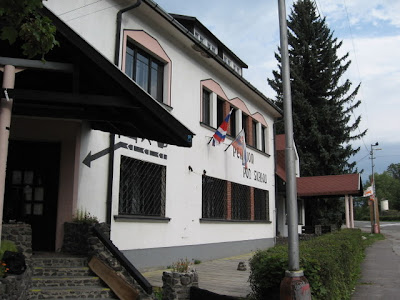 The method of choice in these fast cold rivers is called "Czech nymphing." Basically, you trawl for trout. You tie on two or three heavy nymphs, let out almost no line, and stick your rod tip at the top of a run letting the leader lead the nymphs past the trout. Effective, but not exactly my idea of fun. Czech nymphing is used in a lot of trout fishing competitions, such as the 2004 World Fly Fishing Championships which were held on these very rivers in Slovakia. But really... trout fishing competitions? Doesn't that go against the grain of fly fishing in general? 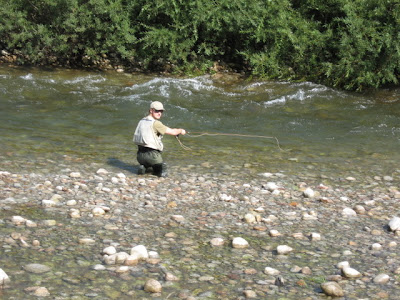 For one thing, I have never been able to cast more than a single fly without getting completely tangled in the kinds of rats' nests that only can happen in fly fishing, hopeless gordion knots that take hours to undo. I fish with one fly on my line, no indicator, American style, with no apologies. 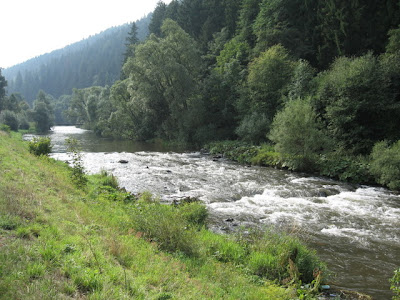 Apologies, however, were not needed. We did not catch any fish....
Posted by dumneazu at 5:14 AM

Michelle Peterson said...
This comment has been removed by a blog administrator.
6:51 AM

Thanks again (for the 1st time) for your excellent posts on fly fishing in Slovakia. I have peeped previously...
Slov can indeed be a nightmare to navigate for foreigners, as you illustrate so well.

I am looking forward already to challenging the lady in the Papiernictvo for charging me more than the locals for a day permit... ;-)
I don't expect to win the battle (I have already pointed out this sort of thing to the President of the SRZ, but he chooses to ignore me ... so far), but I feel it's a moral duty to at least try.

Bela is very nice. Mostly grayling river, graylings are up to 40-45 cm

I also love Vah near city Ruzomberok. Decent population of big trout, both browns and rainbows