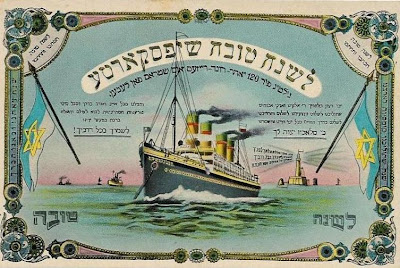 L'Shona tova y'all...it's Rosh Hashonah, which means New Years to all of us who fall somewhat in the Jewish line. Rosh Hashanah extends over the first two days of the Hebrew month of Tishrei, and is actually one of four "New Years" and by the Jewish count, it is now the year 5768, and today also marks the beginning of Ramadan. Both holidays involve eating sweets (among Muslims, sweets and special delicacies break the daytime fast) to ensure a sweet future. There are lots of traditions that mark the celebration of Rosh Hashanah, but my favorite is the annual pilgrimage of thousands of Breslov Hasids to the Ukrainian city of Uman, where the grave of Rabbi Nachamn of Breslov is located. 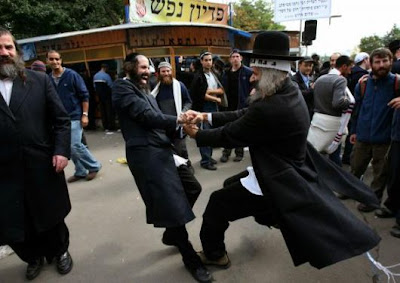 When Rebbe Nachman died, he told his followers: "Whoever comes to my gravesite and recites the Ten Psalms of the Tikkun K'lali, and gives even as little as a penny to charity for my sake, then, no matter how serious his sins may be, I will do everything in my power -- spanning the length and breadth of Creation -- to cleanse and protect him. By his very payess (sidelocks) I will pull him out of Gehenna (purgatory)!" [photo from The Forward] 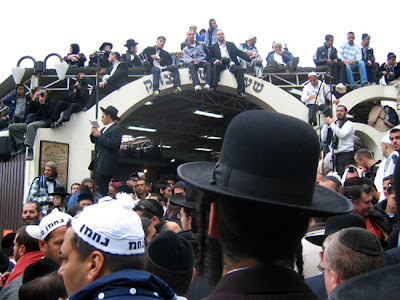 The Breslovers are one of the less insular hassidic sects, and while they are, naturally, strict in observing the Torah they have a reputation for outreach towards "penitants" - non-orthodox Jews seeking to return to the fold of orthodoxy. Unlike Chabad-Lubavitch, which focuses on strict torah learning and the practice of mitzvahs, Breslov teachings stress the value of mysticism and meditation. 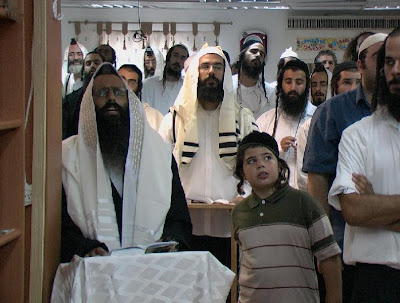 These are the Hassids you can see dancing on the rooftops of vans in Brooklyn in white yarmulkes covering their long, thick, wild payess sidelocks. With their stress on the mystical benefits of spending an hour a day dancing and meditating in forests, Breslov are the Grateful Dead Hippies of hassidism. Breslov is wildly popular among young people in Israel, especially those who were not raised in hassidic tradition, especially Sefardic Israelis. 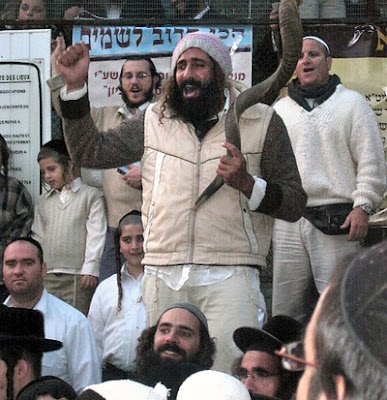 Unlike most Hassidic hoyfn, Breslov do not follow a dynastic line of rabbis descended from their founder, Rabbi Nachman, claiming that When Rebbe Nachman died in 1810, instead of appointing a new rebbe, his followers continued to look to him as “the Rebbe.” In this sense Rebbe Nachman is still the leader of the Breslover Hassidim. Where other Hassidic groups have a chief "rebbe" the Breslover's have... Rebbe Nachman's chair.

Needles to say, the pilgrimage to Rebbe Nachman's ohel in Uman is not without problems. The huge kosher outdoor kitchens have to serve 20,000 devout Jews, and a lot of them get food poisoning. People sleep in tents in the parking lots behind the Breslov offices. Greedy cab drivers try to rip them off. But still they come, hoping to be pulled out of hell by their sidelocks. On the other hand, the Breslovers have a great musical tradition, since Rebbe Nachman himself composed many exquisite niggun melodies that are still sung.
Posted by dumneazu at 7:16 AM

Email ThisBlogThis!Share to TwitterShare to FacebookShare to Pinterest
Labels: Jews

Hi,
I'm the associate editor of a semi-academic journal of the Shalom Hartman Institute. We would love to get your permission to publish one of your photos from Uman.
Could you please respond (your comment will be directed to my email),
Many thanks

Unfortnately, the photos were plucked from google images on the internet... I don't know if they are still there... or where. You can correspond with me at my own address: zaelic@gmail.com