Sighişoara: Concert in the Synogogue 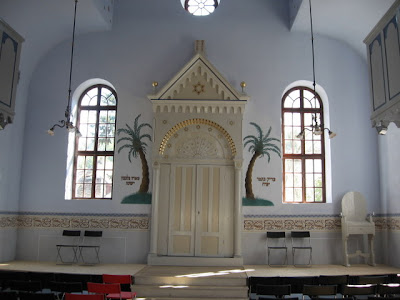 Just got back from a fast trip to Romania. The Ariel Foundation of Sighişoara has been restoring the Synagogue in Sighişoara, and as it was European Union Day of Culture, curator Julie Dawson asked if Di Nayes could come to play. It was pretty short notice, so Puma and I did the concert as a duo. Sighişoara, located just south of Tărgu Mureş, had a small but significant Jewish community. Today only one Jew still lives there, although Julie told us that as she has been working at the Synagogue more and more people have told her that they actually also have Jewish ancestry, but had never told anyone. 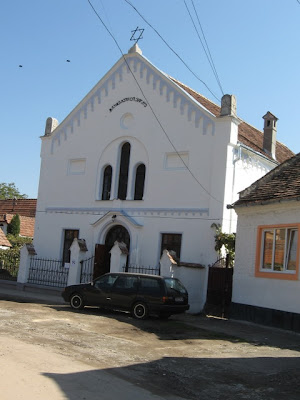 In Romania, many such synagogues lie in ruins because local Jewish communities are so small, aged or nonexistant that upkeep is just too expensive. In Şighişoara the Synagogue will become a local culture center featuring concerts, educational programs, and a space for art, much like the Tranzit House Foundation uses an old Synagogue in Cluj for the same purpose. 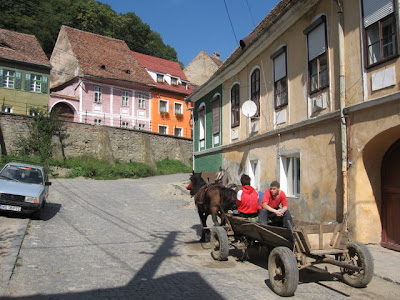 Sighişoara is one of the prettiest old towns in Romania, a far cry from the cement and dust urban horrors of Bucharest, Arad, or Craiova. It attracts a lot of tourism, both foreign and internal, and as such it offers a lot more in the way of places to stay and eat than most Romanian towns. Still, who needs choices when you are in Romania. There is always ciorba de burta. Tripe soup! The soup the tourists never touch. 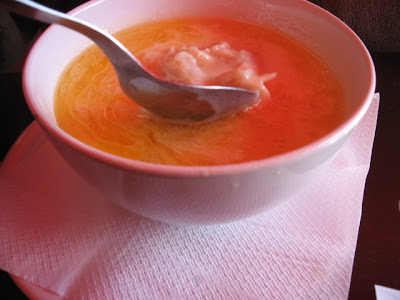 Ciorba de Burta is Romania's take on the pan-Ottoman tripe soup tradition. Almost every place offering food with the exception of McDonald's and a few bakeries offer ciorba de burta. It is often eaten for breakfast, and people swear that it is a cure for hangovers and a panacea for all kinds of ... er.... male disfunctions.... it is usually one of the cheapest options on the menu at about two Euros in a fancy restaurant. 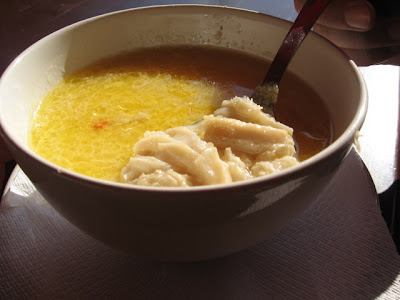 I don't understand the queasyness that many people express about eating tripe. I cook ciorba de burta at home, so I know first hand about the smell of cooking tripe, but most folks who turn their nose up at it have never experienced the bubbling cauldron of shit that is the tripe cooking process. Anybody would be happy to find somebody else to take care of the four-hour aroma attack that is the essence of tripe preparation. And sure, it looks like a soup made from the brains of silicon based aliens from the planet Zar-Gon, and it is a bit squiggly on the palate, but regular old ciorba is a creamy, delicious garlic-flavored meat broth with some boiled tripe, usually served with thick water buffalo sour cream and an incredibly hot pepper. 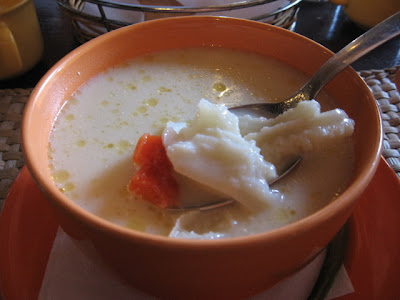 Although there are less than 2% Saxon Germans living in Sighişoara today, they have a strong influence on the town and region. During the 12th century, Germans known as the Transylvanian Saxons were invited to Transylvania by the King of Hungary to settle and defend the frontier of his realm. In 1211 King Andrew II of Hungary invited the Teutonic Knights to settle and defend the southeastern corner of Transylvania. To guard the mountain passes of the against the Cumans, the knights constructed numerous castles and towns. Alarmed by the knights' rapidly expanding power, in 1225 Andrew II expelled the Order 1226, although the colonists remained in the Burzenland. 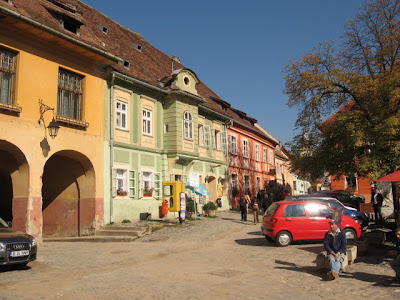 There are fewer and fewer Transylvanian Saxons in Romania anymore, as their numbers have been in decline since WWII. Many Saxons were avid Nazi sympathizers, and were deported to Germany after WWII's end. During the 1970s aand 80s, Nicolae Ceaucescu used to sell the right to emigration visas for Saxons. The West German state used to pay $6000 for each Saxon who wished to emmigrate, a great source of foreign currency in bankrupt Communist Romania. (Ceaucescu used to charge Israel only $3000 for the emmigration of a Jew.) Then, after Romania opened up in 1990, many more thousands fled to Germany where they were granted citizenship under Germany's right-to-return laws. There used to be a joke doing the rounds in Berlin around 1991: "What is the difference between a Transylvanian Saxon and a Turk? The Turk speaks German and has a job." 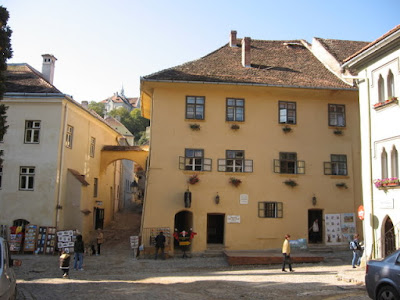 Today, however, many Saxon Romanians are coming back to Transylvania to do business and some are resettling in places like Sighişoara. The Romanian prince known as Vlad the Impaler (Vlad Ţepeş) was born in Sighişoara, supposedly in the house shown above, which is a somewhat tacky theme restaurant today. IF you like cheesy Dracula souvenirs, you can find them all over Sighişoara. On the other hand, since Sighişoara has a real historical connection to Vlad III, it is nice to learn that he was a lot more than just the inspiration for Dracula myths. Although a vassal and often prisoner of Hungarian King Matyas, Vlad maintained an independent policy in relation to the Ottoman Empire, and in Romania he is viewed by many as a prince with a deep sense of justice and a defender of Wallachia against Ottoman expansionism. Most of the tales of Vlad's attrocities actually originated from among his Saxon detractors, who saw him as a rival for the attentions of the Hungarian King. 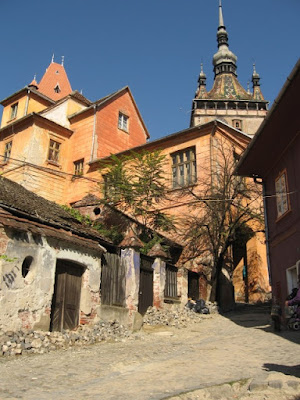 Still, you have to consider the small details in assessing the life of somebody like Vlad the Impalers. This account, written in 1490 in the Russian Chronicle of Dracula, satates: "They say that when he was in prison he didn’t forget his evil habits, but he caught mice and bought birds in the market and then he executed them, some by impaling them on stakes, others by beheading, and from some others he took the feathers off before letting them go. And he learnt how to sew and thus he kept himself alive in the prison. By sewing shirts made of the skins of the mice." 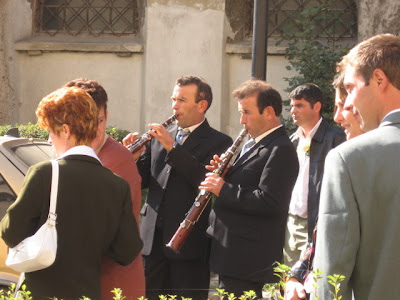 Tarogato players accompanying a wedding procession the morning we arrived. There is nothing more cheesy than tarogato music at a wedding. Nothing. These are essentially wooden soprano saxophones. They make... well... noise. Some people like that noise. Especially in the shadow of Dracula's birthplace.
Posted by dumneazu at 12:05 PM

Perhaps the tarogato is designed to drive vampires away from the vicinity of the bride's neck, so that the groom gets first bite!

I remember more than a few ciorba de burta back in my Romanian days, at least once on the occasion of a severe overindulgence of tuica. The tripe, like the feet, should have qualified for the epithet 'patrioti'--the only parts of the pig to stay in-country in those days.

Sighisoara is a wonderful, walkable town. We spent half a day there on the way from Sibiu to Brasov.

Interesting that the tárogató player on the right has his hands reversed - right on top, left on the bottom. I have never seen this on a woodwind, and it is certainly diffeent from what the guy on the left is doing. Can the instrument be played either way?

I am an American with a Romanian boyfriend. I love love love love ciorba de burta (tripe soup) so much. I hated the smell while it was cooking, but once it was done it was amazing! I'm vegetarian these days, but every once and while I'll still eat some of the delicious broth. We're going to Romania in the fall and I think I might have to eat the real deal there.

Is tripe the same as kishka?

No, kishka is what modern Ashkenazic Jews call "stuffed derma". Basically bread crumbs in a sheep intestine. Versions are still common in Poland and Slovakia, and the best bread crumb sausgae I ever ate was in Portugal. "kishkes" is the Yiddish word for "guts" ("treyp" is tripe) and although beef or sheep tripe can be considered kosher, it doesn't play a big role in Jewish cuisine (outside of Tunisian Jewish cooking, at least.) My guess is that since two thirds of every animal slaughtered by a kosher butcher was sold to non Jews (the profits going to the upkeep of the rabinnical office) the tripe was a high-profit tidbit that was too valuable for the home table.