The Mysterious Pet Monkey Ads of the 1960s.

When I was kid growing up in the Bronx I used to get a magazine called "Boy's Life" the official publication of the Boy Scouts of America. Back in those days there used to be an advertisement in the back section that caught my attention: you used to be able to order live squirrel monkeys via the post. These little fellows would get tossed into a box with an apple and some monkey chow, sent through the mail system, and somehow arrive at your doorstep alive, and presumably, happy to see you. 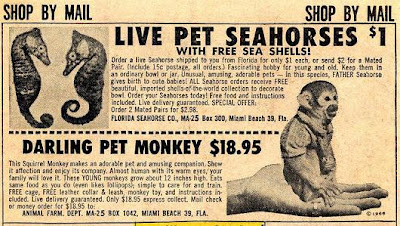 "Live Delivery Guaranteed!" Of course, every ten year old in the Bronx wanted one, myself included, but I have never met anybody who actually owned one of these pet monkeys. At that time, $18.95 was considered a lot of money. But still - I have never met anybody who actually ordered a monkey from the Boy Scout magazine. Now, Monkeys are about the worst pets one can own - apart from the cruelty of owning primates as pets, squirrel monkeys are social animals who need to live in groups, not to mention that they wash themselves in their own urine. But of course, when you are ten, you don't worry about these things. In those days, advertising aimed at ten year old boys was direct and effective...

Yes! Yes! We all want pet baby raccoons! And by some mysterious power, no parent alive on the face of the earth ever allowed any of us to get one. Thus we were denied the valuable experince of watching our pet baby raccoons grow up to be vicious, wild, rabies carrying monsters with no experience of domestication at all. I was talking about these pet ads with some buddies of mine the other day... and nobody knew of anybody who ever actually got one. Now, there are a lot of strange folks in the world who like to own monkeys and raccoons and such as pets... but even in those unenlightened days it was considered a dark rarity. But it doesn't end there... did anybody actually ever order one of these: 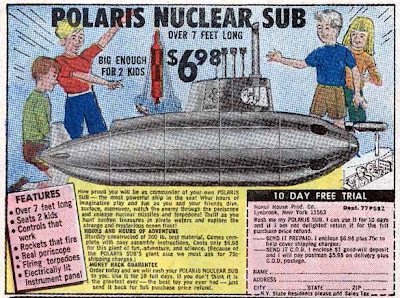 Damn. Your own Polaris Nuclear submarine. With a 10 day free trial! Who wouldn't want one of these. I could have sailed down the East River and wiped Brooklyn off the map with one of these. In any case... I'm doing a concert in Transylvania, be back next week.
Posted by dumneazu at 3:02 PM

Email ThisBlogThis!Share to TwitterShare to FacebookShare to Pinterest
Labels: Monkeys

Hi Bob. Your article spurred so many memories! I used to read your Boy's Life mags too.

Where did you find these pix? I'm really curious.

Do you remember that I ordered about 500 Xmas cards from an ad in one of these magazines (by myself, without asking) ? Mom was furious

I also grew up in the Bronx, and while I never ordered a monkey or a racoon (damn it!) I did actually order the submarine! It was literally a paper sheet that you had to hang over a card table (why we had a card table when our family never played cards, I have no idea), and you sat under the table and made Voyage to the Bottom of the Sea noises with your mouth. I remember wondering if the US Navy had really big card tables ...


When I was 10 or 11 my cousin Ray sent-away for a Monkey from one those little two-inch ads in the back of Boys Life Magazine. Ray was my age and didn’t tell his parents about the purchase, which he claimed was a surprise birthday present for his father.

The monkey who was eventually named Fenton, continued to live in my aunts kitchen for many years after Ray had grown bored with it, in fact “Fenny”, as my aunt Jean called him, was still around long after Ray had grown-up and moved away. I won’t tell you what Fenny’s favorite activity was, but let’s just say it was not something appropriate in public, and it was difficult to pretend it wasn’t happening 3ft away from you while you were having breakfast in the kitchen dining-nook. Anyone else would probably have consigned Fenny to the Humane Society, but Aunt Jean stuck with him right thru to the end.

I did get one of those monkeys. He arrived in his "free cage" which was actually his wooden shipping crate. Unwittingly, we unscrewed him out of his crate in our dining room, after which my dad got bitten on the hand while catching him. He was never really tame, so I had to get his leather harness on using leather gloves. Then he'd settle down, climb up the leash to sit on my hand while I took him out in the yard and around to the neighbors. My dad built a much larger cage, and I had him for about 6 months before he escaped into the woods of the back yard during a cage cleaning. My last view of him was leaping through the treetops until out of sight. It took another month before the pervasive smell of over-ripe bananas and monkey poop was out of the house.

I still want the sea horses.

My brother ordered one, and yes, mom and dad were mad, but let him keep him in the attic room until he got too wild. My question for anyone else who had one is, did anyone develop lymphoma or leukemia. Monkeys are known to carry htlv1, (not AIDS) which is a virus related to lymphoma and leukemia. My brother may have died from lymphoma, and I am getting tested for it now,

I remember those ads in Boy's Life. I did purchase two things. One was a realistic looking switchblade that had a button on the handle , only it didn't flip out the blade. The button was just for looks.

The other thing I got was the 12 foot hot air balloon. To my disappointment it was tissue paper strips that had to be glued together. What I did was get the fireplace going and then got on top of the chimmney and put the bottom hoop over it to get it filled with air. For a weight I fastened a turtle with a stamped return envelope taped to the bottom. Of course the balloon and turtle went straight down, so I just sent up the paper balloon by itself. The wind was blowing pretty good at the time and it was going more sideways than up. My mom was hysterical with anger because in the distance was high power lines with dry grass fields everywhere. She was convinced it would burn hundreds of acres and with oil wells everywhere there would be explosions too.....which would have this a much more interesting story.

Both items were rip offs. I really did want the monkey, which my best friend did get. Don said it crapped all over the room and was very wild climbing up and down the drapes. They got rid of it in a week.

I actually had a squirrel monkey when I was a kid. Her name was Sally

In Asia they still send newborn poached rhesus or long tail macaque babies in ground shipping like that. But no food bcud they only can nurse. Wrapped in a towel, 4x4 cardboard cube w air holes. So sad and terrifying for poor baby monkeys.