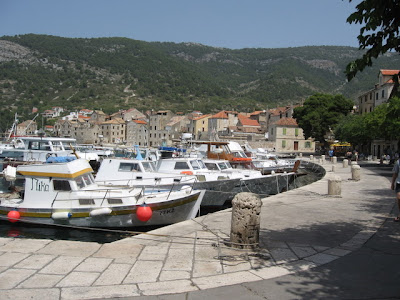 This is the third trip I've made to Komiza, the small fishing village on the outer west side of Vis island in the Croatian Adriatic. Captain Squid, who lives on his sailboat when not piloting supply ships to oil riggers off the coadst of Angola or Brazil, likes to moor in the harbor here and spend weeks sipping coffee and travarica with the local sailors and fishermen, so it is like a second home to him. Komiza, like all of Vis, was a center of Yugoslav partisan activity during WWII, and as such was declared a military zone and spared the rapid developement that affects so much of the Croatian coast. 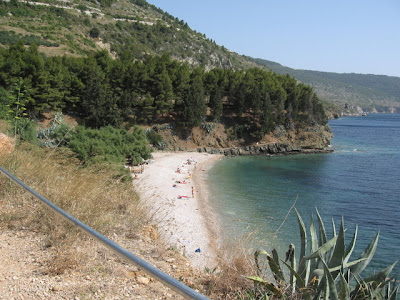 Yes, you can still find deserted beaches in the Adriatic, but you ought to get out to the outer islands to find them. You don't need a lot of money to see the islands - ferry travel is cheap (about five dollars a ride) and you can usually find a room for rent in a family house for less than EURO 25 in full season. 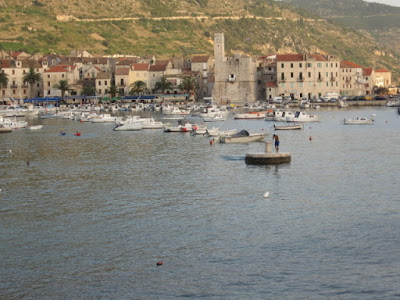 This part of Dalmatia used to be part of the Venetian Empire, and the architecture shows it in spades. The local residents are Croats, but folks in this region tend to refer to themsleves as Dalmatians, and - besides their language - don't see much empathy between themselves and the nearby mountain Hercogovinan Croatians or the Pannonian Croatians up around Zagreb. 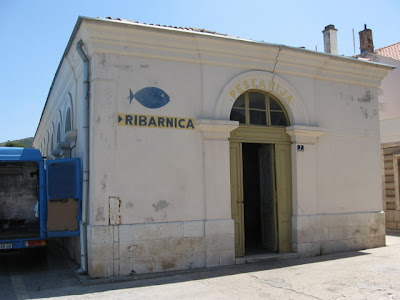 Above, you can see the fish market in Vis - one sign says "Ribarnica" in Croatian, while the older sign, just above the door, reads "Pescarija" in the old Dalmatian dialect. The Dalmatian dialect of Croatian retains a lot of old Dalmatian vocabulary - Dalmatian was a Romance language similar to Friuli or Venetian that was spoken around these parts until the 19th century, and Italian is still widely spoken as the second language of choice. 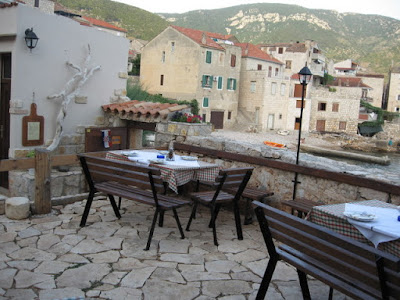 The Konoba Barba sits on the western edge of Komiza, near a couple of other konobas (Dalmatian wine and fish restaurants) including one... run by somebody Captain Squid refers to as a "Hercogovinian fascist nationalist bastard!" Dalmatians prefer to look after their own. 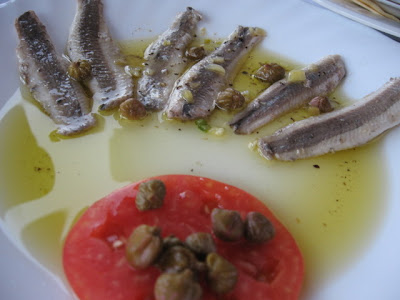 Salted anchovies as an appetizer, with tomatoes, olive oil, and capers. If you think anchovies are simply a salty fish that comes from a can and is thrown on pizza, you are wrong. 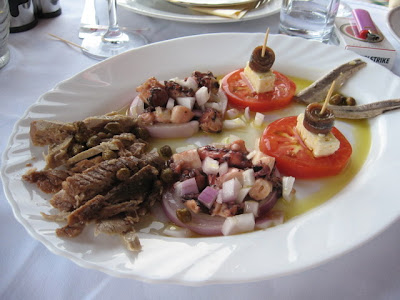 Marinated tuna, octopus salad, and anchovy with white sheep cheese appetizers. We ordered fried squid as a main course, but I was so busy falling on the platter like a hungry lawnmower I forgot to take any photos - the squid in this part of the world is rolled in flour and lightly fried, producing a light, crisp batter unlike the bready fried squid you would find in most Italian restaurants. 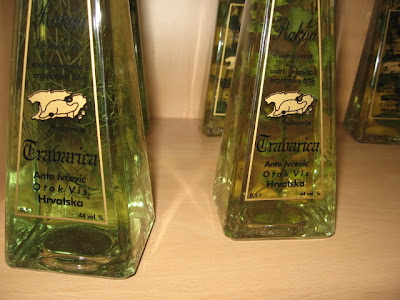 Travarica is the drink that defines the Dalmatian coast. It starts with pure grape spirits, grappa, known locally as loza or rakija, and then local fragrent herbs are addes to infuse the flavor. Everybody has a different recipe, but rosemary, sage, mint, and carob are common ingredients. The one below was made from salvia, which gave it a strange sweet flavor without the addition of sugar. 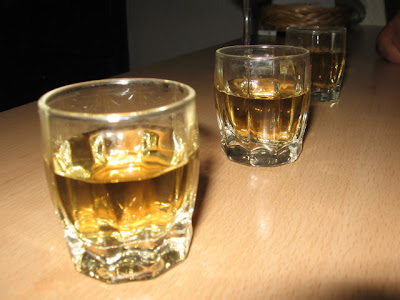 We headed out the next day aiming to get to the island of Lastovo, but nasty bora winds forced Captain Squid to reconsider and we wound up taking a berth in the harbor of Velka Luka on the north side of the island of Korcula. 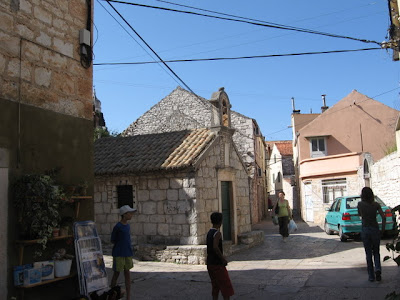 Velka Luka is unusually untouristed as Dalmatian towns go - it still has a ship building factory and doesn't need to push for more tourism, which made it a fine overnight stop for us. The shipyards produce the rescue pods that are used on modern ships as lifeboats, and we saw one taken out for a trial run. 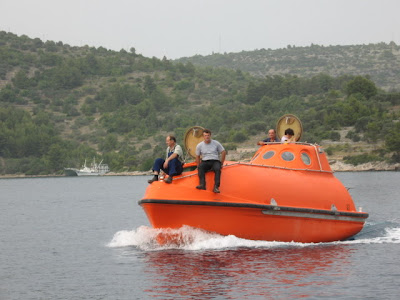 Exhausted from fighting the winds and choppy seas, we just wanted something simple and cheap to eat, so it was pleskavica time. Hamburger of the Gods. You want pleskavica in a nice fresh-baked flat lepinje bread, you go to a pizzeria because they have the oven to make the bread fresh. Also, a lot of places call them "hamburger" because, well.... pleskavica is considered to sound too Serbian. Hamburger is much more modern and globalized sounding. So hamburger it is... 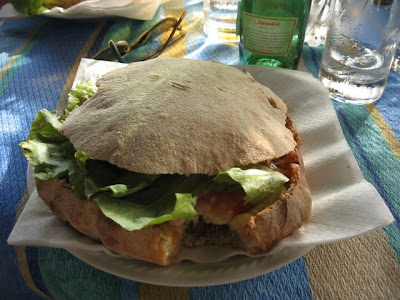 Tuna farming off the coast of Korcula. fishermen catch undersize or normal sized tuna, and place them in these fenced off cages, where they will be fed until they double in size and are sold for astonishing prices to Japanese buyers. Unlike a lot of fish farming operations, these cages are contantly moved around behind the moving ship, so they are slightly less damaging to the environment. You gotta suffer for sushi. 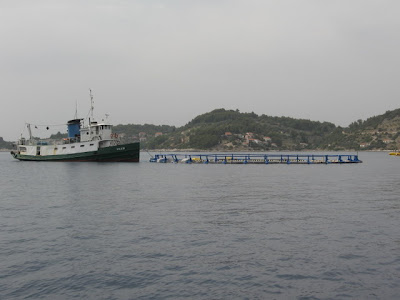 And so, now I'm craving pleskavitza. (are you coming to Transylvania this summer by any chance?)

Hi Andrea
Well, we want to drop into Clujovar, but we dont know when - work keeps popping up. I'll be in the US when Fekete To happens in October, so hopefully it would be in late summer or September.

Your blog is great in any limba...

Mail me on shrinkmamma @ gmail . com so we can trade phone numbers and arrange how to meet in the capital city of the county right under Cluj :D