The Pršut of Happiness 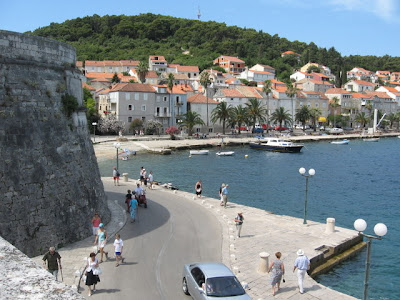 Korcula is as far south as we got in the Adriatic. Located within a day's sail of Dubrovnik, it was the town that offered the best ferry connection back to Split. We moored in the town marina in the middle of a flotilla of Italian millionaires and their private yachts. 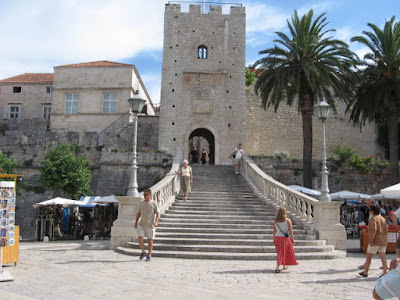 Korcula is yet another of the small Venetian walled cities that make up the Dalmatian coast, yet it plays its one tourist trump card full blast. Korcula claims to be the birth place of Marco Polo, the 15th century Venetian merchant traveller who visited China. Korcula's claims are
not holding water with histoprians very well, and are baqsed on the fact that some families on the island are named "Di Polo" even today. But a tourist trap needs bait, and Korcula dearly wants to be that trap. 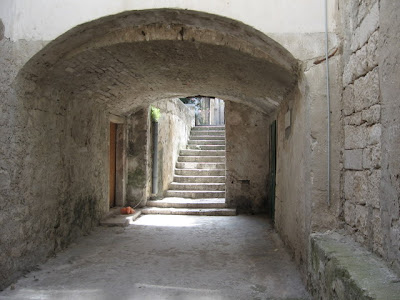 Mind you, history has no actual record that Marco Polo was born here. He was a Venetian, and Venetians moved around a lot as traders within their own realm, which included Korcula. But Korcula needed a tourist draw, and so various houses were claimed as "Marco Polo's Birth House" until finally a particular tower, located conveniently near the church, was designated the official Marco Polo House. Except that it dates from about two centuries after Polo was born. 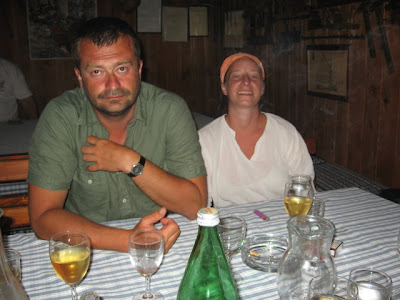 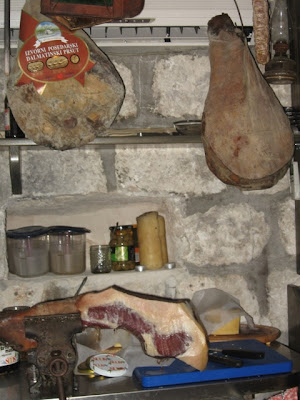 Above is the pršut station at the Konoba Marco Polo. Dalmatia's take on prosciutto, pršut is a ham served in transluscently thin slices and it beats all other pig meat to hell. Some of the best is made on the high, dry mountainsides that rim the Adriatic going up towrds Bosnia. One friend of Captain Squid in Split is a sailor who is essentially a vegetarian - except that the only meat he will eat is pršut. It's that good. Croatian vegetarians make an exception for pršut. 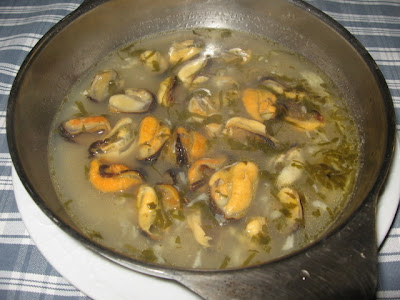 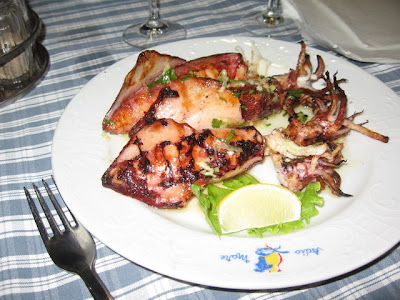 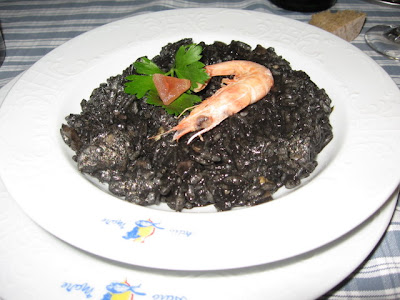 Black rissoto called crni rizot. This is prepared from cuttlefish, which is a bonier relative of the squid, and which also has a lot of deep black ink, which flavors the dish and dyes it a jet black. It looks disgusting, I know, but it may be one of the best seafood dishes on earth. 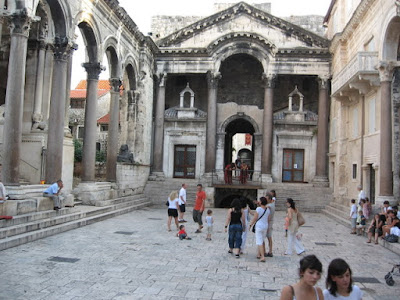 A five hour ferry ride (air conditioning!) brought us back to Split to catch our midnight sleeper train back to Budapest. After wandering around the Palace of Diocletian (the 4th century Roman Emporer best remembered for feeding early Roman Christians to the lions) we took dinner at our favorite Croatian Konoba - the almost invisible Fife's. Located way down the northern end of the Split Riva, almost on the waterfront itself, Fife is informal, cheap, defiantly local, and possibly the best food in Split. 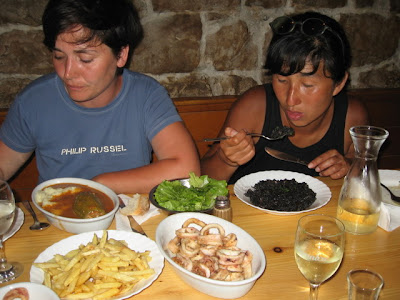 I won't be posting much in the next week - I'll be teaching and performing Klezmer music in Poland. When I get back there should be lots of pictures of kielbasa and zurek... but it sure ain't the Adriatic.
Posted by dumneazu at 6:25 AM

Email ThisBlogThis!Share to TwitterShare to FacebookShare to Pinterest
Labels: Croatia

Ooh we accidentally found and ate at the same place in Split, and second your review - it was excellent!

I'm desperately seeking Croatian Prsut in New York. Does anybody know where I can get it or order it from? Thanks.