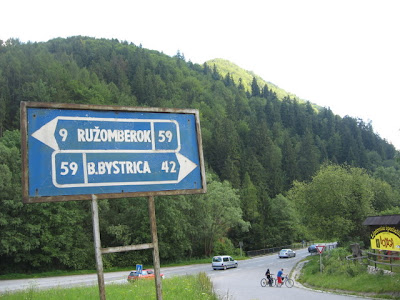 It's what we in Hungary call "Cucumber Season" (uborka szezon) these days - mid-summer and all the newspapers can report is that the cucumbers are ripening. Yes, we had a bit of a nasty heat wave, although the BBC reports of 500 dead seem to have come from some oddball and untraceably politicized source (Hungary's political life is characterized by a particularly rabid partisan insanity at the best of times, and the bankrupt health care system is only the latest summer theme to play to the populist heartland.) So no, we are not dead. Nor are we overly warm - it has been cold, rainy sweater weather for the last few days. All that does is make me yearn for the Carpathian highlands of Slovakia, a few hours north of us. 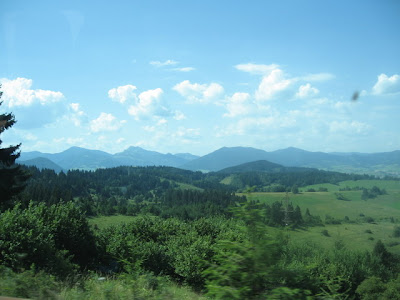 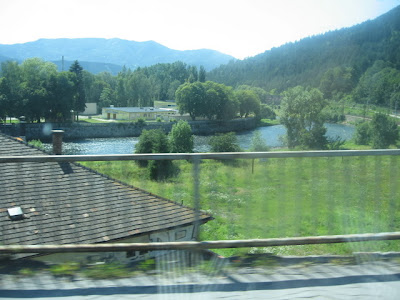 While returning home from Poland we stopped for lunch along the Revuca - no time for fishng (and it was too hot) but just being close to the Revuca is almost enough for me. This is my home stream. Size 14 Olive Hare's ear nymphs tied with a goldbead head. Does. Not. Get. Better. Than. This. Hopefully, me and Fumie are heading up into Slovakia soon for some fishing. 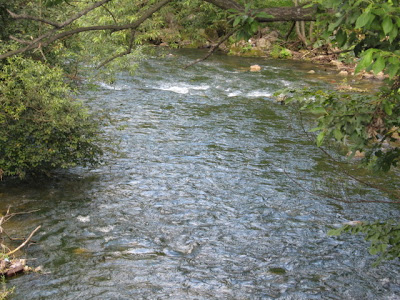 The Revuca is located in a national park, and when Czechoslovakia was communist it served as a hunting preserve for party members - the result is that it remains a wild and unspoiled region with lots of game wardens checking for fishing licences. Which is a good thing, if you like quality catch and release wild trout fishing. 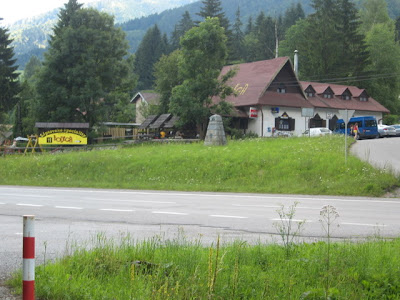 When we go to the Revuca, for fishing we usually stay at a small restaurant with guest rooms called the Bodega, located south of Ruzomberok in the hamlet of Podsucha. Basically, the Bodega is a shepherd's and lumber jack bar with local food at local prices. On weekends bicycle fanatics - and Slovakia is full of mountain bike fanatics - pedal down to the Bodega from Ruzemberok to eat the starch plate special and drink beer and bellow out amazingly loud Slovak folk songs all afternoon. My kind of place. Come on, you do not complain at 8 EURO a room, and 2 Euro for lunch, with ear-crunchingly loud Slovak folk singing thrown in for free. The Bodega specializes in local dishes of the mountainous Liptov region, and that means starchy, cheesy dumpling dishes. In Slovakia, that means halusky, known in Hungary as sztrapacska. 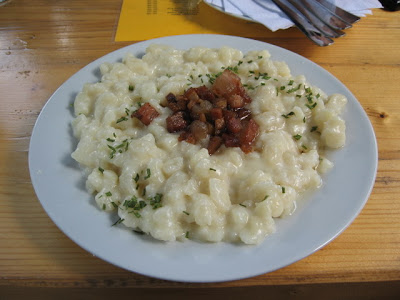 Halusky is made from flour and potatoes mixed into a gnocci-like dough, slathered with sour cream and sheep cheese, and smothered in fried bacon cubes and lard. Not for the kosher crowd at all, I'm sorry, but then, nothing in Slovakia is. I bought lunch for the band - at these prices, I can afford to splurge. Sztrapacska is an old peasant food in Hungary... like a lot of peasant dishes you don't find it in too many posh restaurants, and every restauarant in Hungary wants to be posh these days. As we approached Podsucha I asked the guys in the mini bus "Hey, who likes sztrapacska?" ... And my kontra player, Puma, answered "Who doesn't like sztrapacska?" 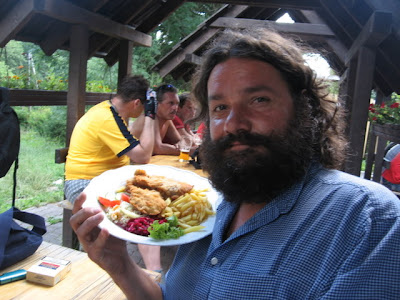 Well, Feri likes shnitzel - or lapos hus as he calls it ("flat meat") which he couldn't get in Poland. And Feri (our cimbalom and flute player) is actually from a Slovak minority family in southern Hungary. Go figure... There is a weekly show on the Hungarian version of the Food network - Paprika TV - about Slovak cuisne. Basically, everything is made by exceedingly cute old peasant ladies with flour, potatoes, and cheese. Sometimes milk is added. Everything has fried bacon bits added. Everything is white. (I have a nephew who would love Slovak food.) At least the Slovaks have a living folk music tradition. Slovaks, at least in the Liptov region, like to drink beer and then feel compelled to sing, which in other regions would be called "shouting happily at the top of your lungs." It is loud. But it is real. The Liptov area used to be home to a lot of great bagpipers, but today the tradition has shifted to heligonka, a great huge honking alpine diatonic button accordion. Last year I got to try one out at the general store in Vkolinec, which is a sleepy UNESCO heritage village where the shop owner doesn't have much to do all day besides diddle around on his accordion. He was a bit unnerved to hear me crash through a bunch of syncopated Lousiana creole tunes from the late, great Amedee Ardoine... 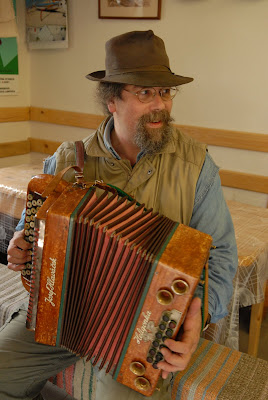 Email ThisBlogThis!Share to TwitterShare to FacebookShare to Pinterest
Labels: Slovakia

My name is Ramos, I found your blog quite interesting, with nice pictures, but I don't agree with you when you talk about how difficult a language is.

- if you want to know which languages are the most difficult in the world, you have to compare them. That implies that you know all of them and that you worked out a scale of difficulty to class them...
- We all, as human beings, belong to the same brand, with equal cerebral potential. We use the language to describe the world around us... in other words, we have to describe the same things in the outside world and in our inside world.
- why would some intelligent people ease their lives speaking a simple language, not very demanding from a cognitive point of view...and why stupid people would complicate their lives speaking a complicated and demanding tongue?
- finally all the kids in the world learn to speak a the same speed.

This feeling of difficulty only depends on what language you started to learn a second language, on your personal background, on your motivation. It doesn't depend on objective features of the language, but on subjective impressions from the learner of a certain language.
Is the declension system of hungarian more difficult to master than the prepositions in french, english or swedish? I don't see any objective reason to say so. Is english an easy language to master, as most people say? A language with 500 000 words? I don't see any objective reason to say that.
I lived in Hungary for 8 years, and I speak its language fluently, I am now living in Slovakia, and I learned its language...
My conclusion would be that a difficult language is an unknown one...and an easy language is a known one.
Ramos