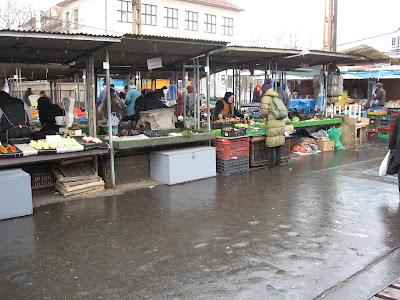 We've been back in Budapest for over a week now, and I am just getting over the worst case of jet lag ever experienced - I can fall asleep at one in the afternoon while sitting in a chair writing emails. Getting back into the swing of Budapest life has been easy - maybe too easy. No more glitzy gourmet supermarkets with their aisles of balsamic vinegars and fake Thai foods. Yesterday we went back to the Bosznyak ter piac for the Saturday market. Had to have breakfast first, so we went to the langos stand. 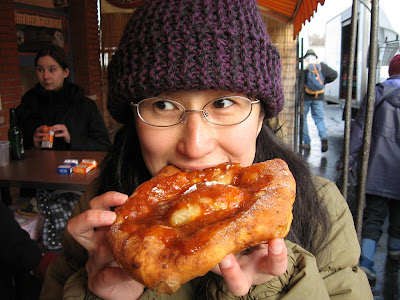 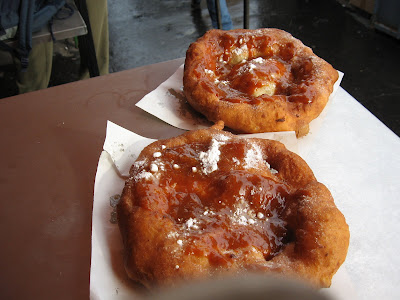 The supermarket offerings are a bit different here, as well. Back in the US, I could never walk into a supermarket and walk out with the makings for kocsonya, which is a swine jelly made from boiling pig's ears, feet, and skin and then letting it all solidify in the fridge. In Hungary, it all comes prepackaged, ready for the boil. That's one happy pig there on the label ... "boil me into a gristly cold pig jelly! Yeah! I can take it! 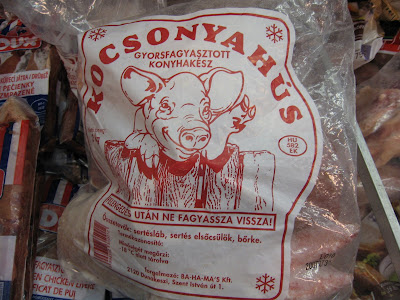 Ahhh... it has been months since I had bread. Or, at least, something like real bread. Good, crusty bread was a rarity in the states, outside of a few good bakeries in New York City I was not impressed by the offerings. Now, Hungarian bread has gone way down in standards since 1990 - really, let's face it, Commie bread was better. But it beats the soft flaccid stuff sold as Italian bread or French bread in the US. 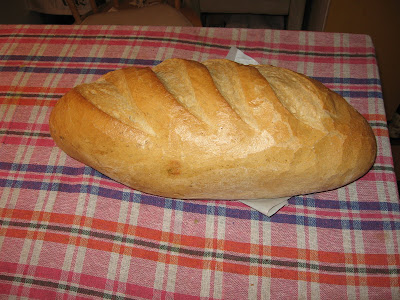 Thursday night we went to Almassy ter for the dance house. Most of the Tukros band was there, and it was like we had never been gone at all. Loud Transylvanian fiddle music, fast csardas, strong palinka... we're home, baby! 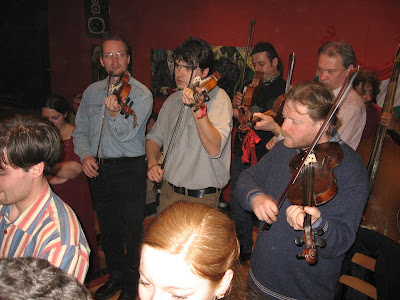 There had to be over 600 people out at the dance house. The Almassy ter dance house is run by the bar staff, charges no entrance fee, and stays open until at least three in the morning. Gyongyi runs the show these days - she used to work over at the Castro Bistro on Raday before the Castro moved. 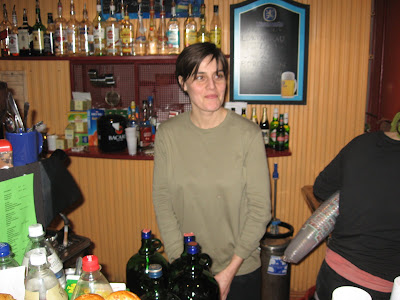 There is always at least two bands and dances going on simultaneously. In the big hall there is always some Moldavian or Gyimes Csango music. Robi Kerenyi was leading the Gyimes set when we got in. 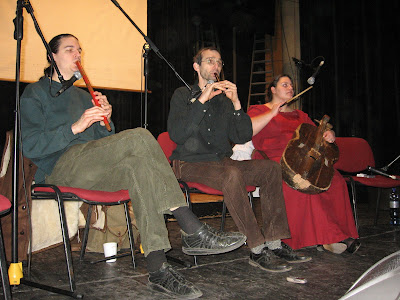 Two flutes accompanied by a gardon, which is essentially a wooden pig trough carved into the rough shape of a cello and strung with three heavy gut strings - tuned in unison to D - which are hit with a stick, and a smaller nylon string which is plucked. Yes, the music is strong and vibrant, but in a decidely Szekely-Australopithecene way... this is only a step up from smashing two mammoth bones together... I know, everybody has their own tastes... well, let's just say that I really used to love Gyimes music. We stayed out way past our bedtimes... which probably had a lot to do with curing the jet lag syndrome once and for all. 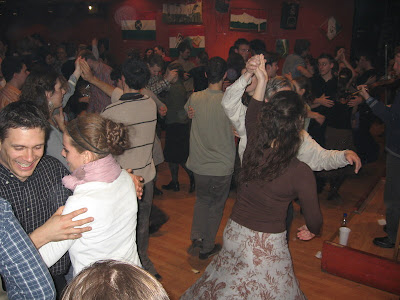 "Szekely-Australopithecene"? The first ever such formulation. What was their diet. Cold, jellied mammoth skin?

Commie bread was better? Not in Romania, where you had to cut it with a buzz saw. Then when you tried to dip it in your ciorba, it would just float on top until the soup got cold. Sure, the bread stores all had signs showing what they should have had, but they never had more than one or two of the varieties, and stale, stale, stale to boot.

Wow! The lekvaros langos look fabulous! As for the kocsonya --- perhaps it's an acquired taste!