Like a lot of folks who play Klezmer music, I got my start playing American traditional folk music back in the 1970s. New York was a magnet for folk music, and there was a very active scene of people playing traditional Appalachian fiddle music and old-time southern music styles. One peculiarity of the New York Appalachian fiddle and bluegrass scene was that almost all of the local music enthusiasts were either Jewish or Italian. Many of the musicians who became the backbone of the east coast Klezmer revival, such as Henry Sapoznik and mandolinist Andy Statman, were regulars at the old-time music jam sessions that were held at the Eagle Tavern on 14th Steet. Young New York musicians would make the pilgrimage south to North Carolina or West Virginia to learn to play at the feet of some of the old masters of traditional folk fiddling, like Tommy Jarrell of Toast, North Carolina.

Tommy's style (generally known as "Round Peak" style) became the New York City default mode for fiddling. Tommy Jarrell's father, Ben Jarrell, had been the fiddler in the obscure but wonderful string band "Da Costa Woltz's Southern Broadcasters" who recorded gramophone sides for the Gennet Record Company in 1928. Da Costa Woltz's Southern Broadcasters were what substituted for punk rock during my high school years. MP3 recordings of the band are here. 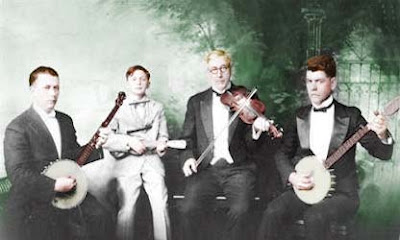 Tommy Jarrell 's style of fiddle - full of off-kilter synchopated bowing and open tunings - was the meat and 'taters of the 70's New York fiddle scene, since Tommy was a living link to an archaic music tradition that was already, by the 1970s, fast disappearing. One day Jarrell made an offhand comment to banjo player Henry Sapoznik about all the Jews playing Appalachian folk fiddle - "Hank, ain't your people got any music of their own?" Sapoznik - whose organizational skills are as amazing as his old time banjo chops - set about answering that question and the beast we know as the New York Klezmer Revival was set in motion. (Henry's book, Klezmer! Jewish Music From Old World to Our World is a must read for those trying to sort out all the meaty contradictions of the early Klezmer revival.) 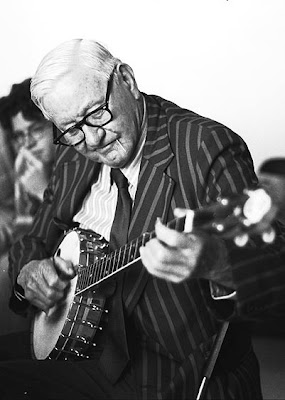 Tommy Jarrell makes an appearance in Appalachian Journey, an online video available at the Folkstreams website. Documentay film maker Les Blank featured Tommy Jarrell in his 1983 film I Will Sprout Wings and Fly. Mr. Jarrell passed away in 1985, but a lot of younger musicians were the inheritors of his repetoire and musical tenacity. The link between New York and the Round Peak music scene was pioneered by Ray Alden, a NYC math teacher and banjo player who researched the styles played by people like Tommy and Fred Cockerham and brought their lively, deeply moving (and highly non-commercial) music to urban audiences with some great recordings. Ray has also kept tabs on the traditional music scenes around the US in his Young Fogies series (highly recommended!) So I was pleasantly bowled over last night when I arrived at a New York party to find Ray Alden and his fretless banjo sitting at the center of an old time fiddle jam session. Just like the old days! 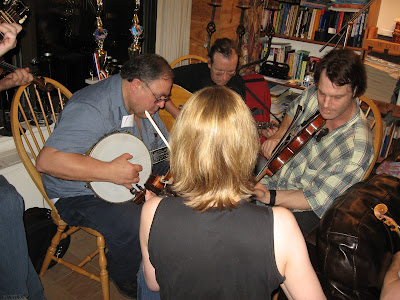 The party was organized by fiddler/guitarist Thomas Bailey (seen above sawing a violin in half) at the home of one of his friends in Manhatten. Tom - a native Virginian who is also first rate guitarist who sings with great style - is one of those rare people in the US who can cobble together a full time living as a traditional musician, and should be touring Europe and the Britlands soon in the future. And Man, can they throw a party! I know people, like our friend Tom Popper in Budapest, who take their party-throwing skills very, very seriously, but my hat is off to Thomas' friend Guy, who let a bunch of itinerant banjo-twangers turn his beautiful west side apartment into the northern equivalent of a North Carolina "Breaking Up Christmas" party. Incredible food and wine were served to people whose poetic skills were reduced to howling crude verses like:

I haven't been to a fiddle session in the US yet on this trip and, for me, this was more fun than a man should have with his pants on. Ripping old tunes, fine singing, people who really respect the music they play and play it well. Fiddlers Sarah Alden and Harris Wulfson also showed up. Both of them have done their hard time traipsing around east Europe learning music from local Gypsy and peasant musicians. Sarah plays with the Luminescent Orchestrii, part of New York's oddly categorized "Gypsy Punk" scene. She's got a great ear for Romanian and Transylvanian fiddle styles, and we all had an impromptu Romanian fiddle session in the back room around 2 AM... 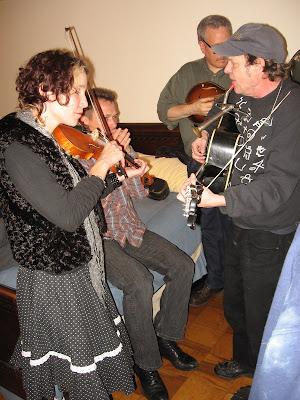 Jeebus!... where in the world would anybody allow you to play three-fiddle Moldavian dance tunes in their apartment at 2 in the frigging morning? And get away with it? My hat is off to Thomas, Mozell, and Guy and their friends for hosting a fantastic party. My tip off to the party was the eminence gris-gris of the New York ethnic music scene, Bob Godfried. Bob is a one-man nerve center for all music happening in the NY folk and ethnic music scenes, a walking encyclopedia of music trivia, history, instrument repair tips, and exhaustive bits of Bronxiana. If there is a Chaldean bar that features oud music in Yonkers, or a Ghanaian Highlife band playing a bar in Queens, Bob knows about it. Need an Azerbaijani accordion tuned? He's your man. Wondering where to find rare Bosnian Sevdah music CDs in the Bronx? Up his alley. Coming in from Lousiana with your Cajun Band short a member? Call Bob G. Without him I would be a babe lost in the woods of the NY music scene. 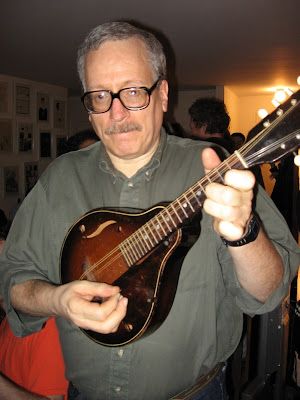 In the photo above we see Mr. Godfried playing a vintage Strad-o-Lin, which were cheap mandolins mass produced before the 1960s that almost all of us NY musicians owned at one time or other. When you are jamming in a room full of valuable vintage Gibson guitars, Vega banjos, and other fine old instruments it takes cojones the size of bowling balls to whip out a despised little Strad-o-lin, but these little plywood babies really scream in a decidedly impolite manner above the din of the banjos and fiddles. Long Live Big Cojones and little Strad-o-Lins!
Posted by dumneazu at 6:27 PM