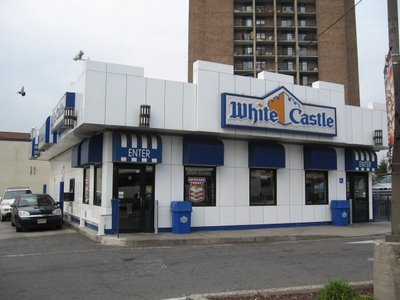 Back in Budapest, the word "hamburger" automatically means "McDonald's." Fast food burgers in all their anonymous glory are what Europeans think of when you speak of America's contribution to ground meat culture. It is sad. Coming back to the US, I have redicovered the satisfying heft of a real, cooked to order diner burger, but my original Ur-Burger, back from my young days in the Bronx, was a White Castle. Known to the world today mostly from the stoner movie "Harold and Kumar Go to White Castle" the White Castle Hamburger is a tiny, cheap, oniony sliver of meat served on an impossibly soft bun inside a little paper box. Cheap, tacky, and invariably located near a highway in a dodgy neighborhood, it tastes like nothing else in the world. You don't eat one White Castle burger. You eat at least four - they're also called "sliders" due to the ease with which tey slide down the throat. Their old slogan "Buy a Bagful!" has now been replaced with "It's What You Crave" and they now even call their burgers "craves", but no matter. These are the Best Worst Food in the World. 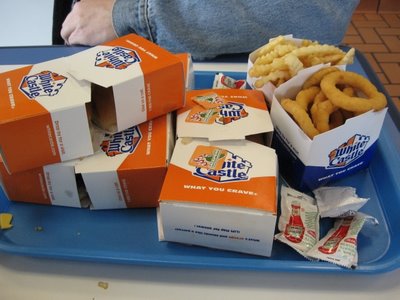 White Castles also follow the depression era practice of taking a miniscule bit of meat and doubling the bulk using onions, in this case, chopped onions soaked in water. The meat patties are stamped out with holes in them , and so the meat is "steam fried" on top of the onions. The result is a classically mushy, meaty wad that melts into the bun itself. In the photo below, the meat is being steamed while the buns warm on top of steamed onions. Anybody here against onions? 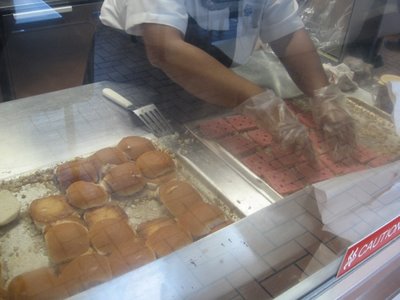 New Yorkers vary widely in their opinion as to what makes White Castle so good, but many claim it is the cheapness of the meat - a combination of beef and , possibly, less appealing gut cuts - that makes the flavor so addictive and distinctive. I used to go to a White Castle in the Bronx when I was a kid, and the flavor has not changed at all. The packaging has modernized a bit, but White Castles are still owned by one family who refuse to expand their franchise, going against all modern rules of business expansion. That's why people will take road trips to fill up on sliders, and why every White Castle sells bulk boxes of frozen burgers to take home. 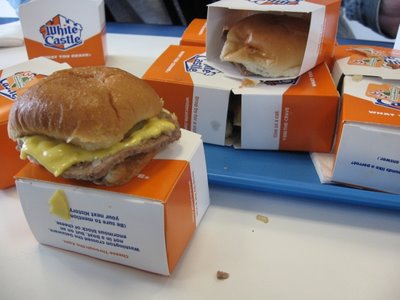 I wouldn't have believed that White Castle could ever improve their burgers, but I tried the "Jalapeno Cheeseburger" at a whopping 74 cents. As you can see from the photo, I did not have just one. Founded in 1921, White Castle is the oldest American fast food hambuger chain, and which were priced at 5 cents until the 1940ss, and remained at ten cents for years thereafter while growing smaller. For several years, when the original burgers sold for 5 cents, White Castle periodically ran promotional ads in local newspaperss which contained coupons offering 5 burgers for 10 cents, takeout only. Today prices are bit higher, but still...affordable? 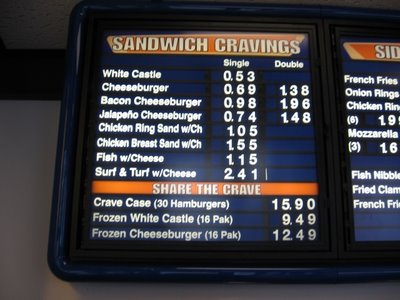