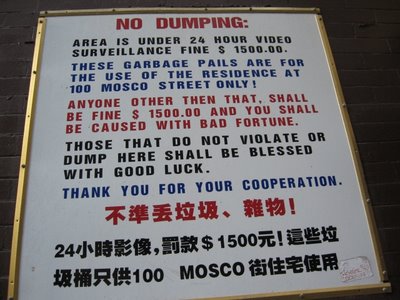 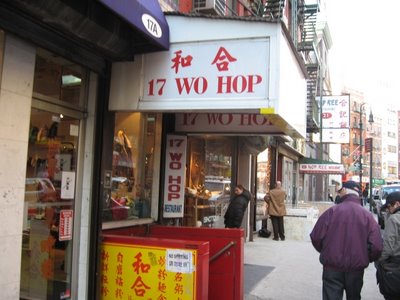 There is a scene in the 1997 Woody Allen film "Deconstructing Harry" in which Allen's character makes a deal with the Devil (Billy Crystal in one of his best roles) and gains his Jewish father's release from hell. But the 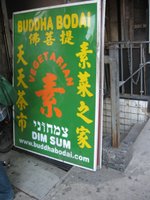 father doesn't want to go to heaven. He wants to go to a Chinese restaurant. It is part of New York Jewish - particularly Ashkenazic Jewish - identity to eat Chinese food, especially on Christmas day. A typical Jewish New Yorker conversation include at least some mention of the latest discovery of a new Chinese restaurant. New York Jews consider themselves experts on Asian cuisine in general, and Chinese food in particular. I know many relatively observant Jews who would never think of eating unkosher food, but who don't consider shrimp or lobster unkosher if served in a Chinese restaurant, or don't worry about pork products in egg rolls or wontons as long as they don't actually order anything specifically labeled "pork." For those that do keep kosher, New York has lots of kosher chinese restaurants. 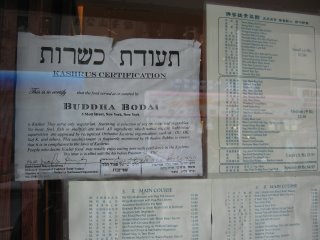 You just can't keep a Yid from his chow foon. It really isn't very surprising, given that New York has been home to a large and prosperous Chinese community since the 1850s, with Cantonese predominating until relatively recently. Chinese food - particularly Cantonese and obvious American-Chinese restaurant hybrid styles of cooking - were usually the first non kosher foods that most NY Jews ever ventured to eat. An extensive study of the phenomena of NY Jewish obsession with chinese food is: "New York Jews and Chinese Food: The Social Construction of an Ethnic Pattern" by Gaye Tuchman and Harry G. Levine, published in the academic journal Contemporary Ethnography in 1992 . The authors note: "Over the years, New York Jews have found in Chinese restaurant food a flexible open symbol, a kind of blank screen on which they have projected a series of themes relating to their identity as modern Jews and as New Yorkers. These themes were not inherent in the food itself, nor did they arise from Chinese Americans' view of their own cuisine. Rather, Jewish New Yorkers, and to some extent other Americans as well, linked these cultural themes with eating in Chinese restaurants. " 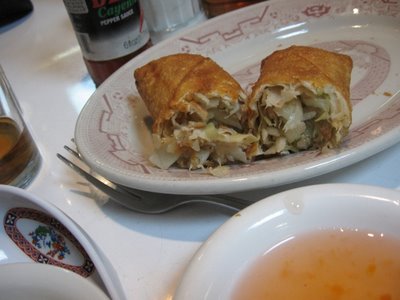 "Three themes predominate. First, Chinese food is unkosher and therefore non-Jewish. But because of the specific ways that Chinese food is prepared and served, immigrant Jews and their children found Chinese food to be more attractive and less threatening than other non-Jewish or treyf food. Chinese food was what we term "safe treyf." Chinese restaurant food used some ingredients that were familiar to Eastern European Jews. Chinese cuisine also does not mix milk and meat; indeed it doesn't use dairy products at all. In addition, anti-Semitism, anti-Chinese racism, and the low position of the Chinese in American society also (perhaps paradoxically) made Jews feel safe and comfortable in Chinese restaurants." 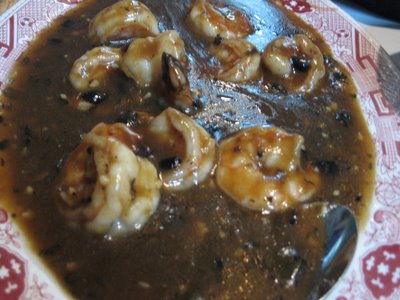 Well, three representatives of the New York Ashkenazic community felt safe and comfortable eating bland Cantonese Chinese food today. My father - a retired New York Police detective - arranged for my brother and I to take a guided VIP tour of the New York City Police Museum, located down in lower Manhattan. Afterwards, it was short trek up to Chinatown for lunch at Wo Hop, which is a shrine to American-Cantonese food in the 1960s style. Above are classic egg rolls - something I am told are not eaten in China - served with sweet plum sauce and hot mustard. Wo Hop is said to have the best "old fashioned" (read: Americanized) egg rolls in Chinatown. Directly above is Shrimp in Black Bean Sauce. Living in Budapest, I don't often get to chow down on shrimp. I'm compensating for it nicely, though. 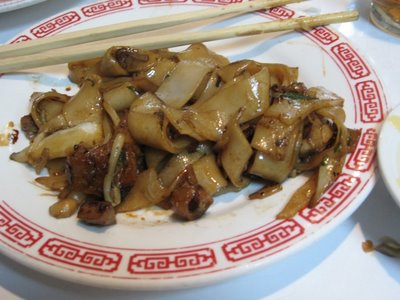 Chow Foon noodles with roast duck. Big fat thick rice noodles that used to be my lunch almost every day back when I was working in Boston. Is China going to take over the world economy and dominate the 21st century? I don't really care, as long as chow foon noodles become easier to get. Why should anybody have a problem with the Chinese taking over the Global economy? As long as they let me eat lunch at their restaurants, I'm perfectly cool with that. Would anybody prefer the British or the Quebecois taking over the world? Bangers and Mash? Poutine four times a day? No. Won't do at all. I'm 100% with the Chinese. 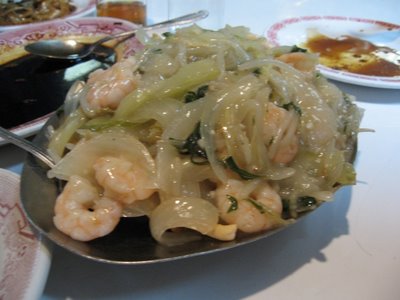 Classic shrimp chow mein. This is a dish of purely American Chinese orgin, and almost nobody orders it anymore except my father. And the funny thing? It's actually quite good! 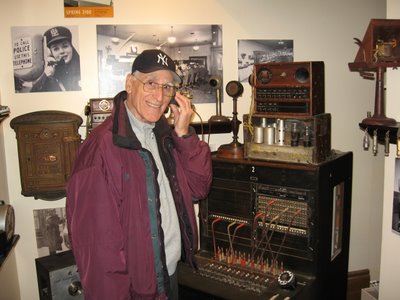 Detective Jack Cohen trying out the old fashioned Police telephone box dispatcher at the former Precinct One. As a retired cop, my father was treated as a celebrity at the museum, with the knowledgeable museum curator giving us a guided tour and prying my father for details about the NYPD back in the "old days." I was pleasantly surprised - it's a great museum, and the special exhibit to NYPD men and women who perished in the World Trade Center is handled with great taste and loving care. Especially moving was the room dedicated to displaying the badges of all the NYPD officers who died in the line of duty. It was truly heartrending to see such a concrete symbol of how many of New York's Finest fell on September 11, 2001. Heartily recommended to anybody visiting the city, and especially to New Yorkers who may have missed it. 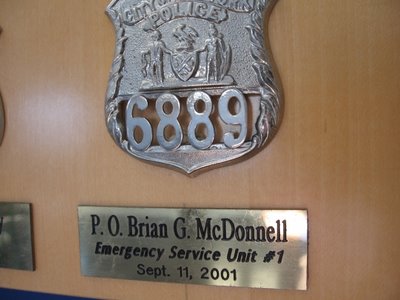