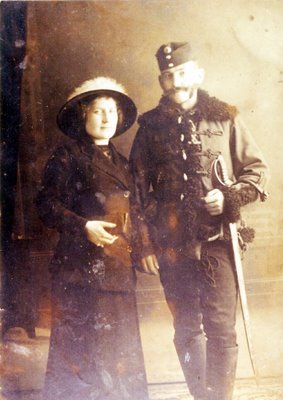 My mother's mother and father, Margit Kasser and Ferenc Grósz. I never met either of them, although I have possesion of my Grandfather's wooden brandy flask from the first world war. My Grandfather died in 1932, my Grandmother in November 1956. 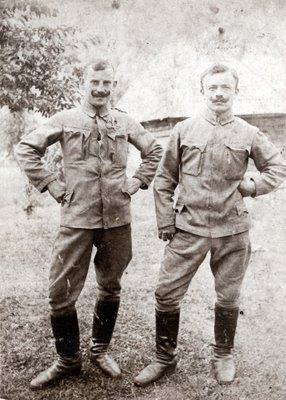 My grandfather was a Hussar, specifically, a Hussar of the Hapsburg King and Emporer in the 19th Jász and Kun Hussar regiment. That's what it says on his ID card. The 19th Regiment was the last functioning military institution of the "barbarian hordes" in the middle ages - it was the right of the Turkish speaking Cumans and the Ossetian Jász to form their own regiments to protect Hungary before and after the Mongol invasions in the 13th century. By the 19th century, the Jász and Kun had assimilated into the "most Hungarian of Hungarians" but still maintained special land and military status in the Hapsburg Empire. My Grandfather - who was Jewish, not Cuman - was the provisioner/butcher of the regiment, and served in the Balkan and First World wars. He met my Grandmother in Bosnia, and moved her to Budapest, then serving in Transylvania around the Carpathians and in Moldavia during the First World War. After WWI the family moved to Veszprém, where my Grandfather worked as a butcher. 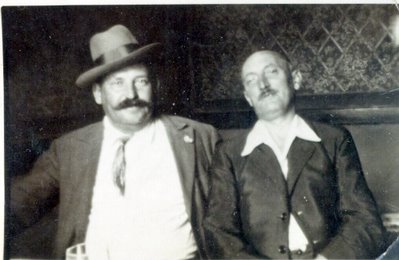 Grósz Ferenc was murdered in 1932, when my mother was four. It took a lot of investigating to get the whole story of my Grandfather's death, but let us at least say his death was revenged. It took about 15 years, but the bastard got his. Due to the vaguaries of Roman law, I can't exactly print how the bastard got his upcomance, but trust me, our boys took care of it. In our family, 15 years is a but a nanosecond when carrying a grudge. The legacy of my Grandparents led to the family joke in Veszprém, called the "Grósz pathology." Grósz women are strong and domineering. As my Aunt Etus said: "Grósz men like to drink, tell stories, sing songs, and have a good time." 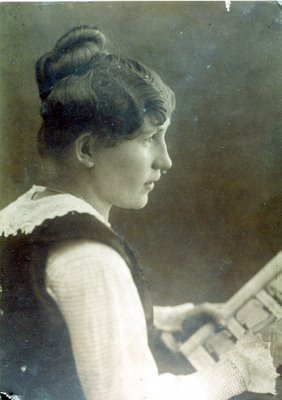 My Grandmotherwas born in Travnik, Bosznia, in 1896. She met my Grandfather sometime during the Balkan wars when his regiment was based in Bosnia. Parts of her family were named 'Kasser' and some 'Gaspar.' She spoke Serbian and Hungarian - like many Hapsburg Jews in Bosnia. During WWI one part of her family moved to Istanbul and became wealthy financial advisors to the last Sultan, Abdul Hamid. (It was pointed out to me - during a tour of Yildiz Saray in Istanbul last August - that being a financial advisor to the final, and most corrupt of Ottoman Sultans might not be something to brag about...) Her family was involved in the salt-hauling trade to Hungary. After 1923 they moved back to Budapest and started Budapest's only Turkish restaurant in Csepel, specializing in eggplant dishes. My Mom worked there for a while, and to this day my Mother hates the smell of eggplant. 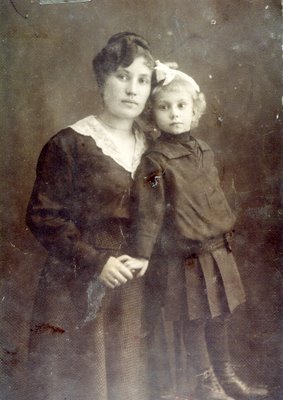 My Aunt Etus with my Grandmother around 1918. Etus passed away last year. Etus was fifteen years older than my Mother and essentially raised my mom. My mother is one tough cookie, but Etusnéni - even well into her very active 90's - always treated her as a little squirt who shouldn't talk back to her big sister. Below, my mom around 1933. 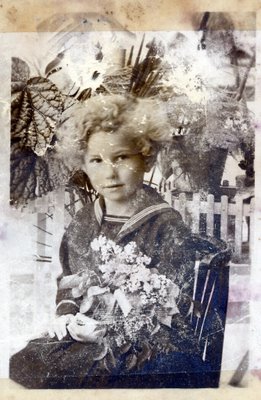 Living out in the country, the family were pretty completely assimilated Jews, who completely identified with being Hungarian. My mother, Margit Grósz, around 1938, in her favorite picture. Within a very short time, all of these happy memories would be overshadowed by the experience of the second World War in Hungary. The Grósz family was one of the few Hungarian Jewish families to survive intact - usually attributed to our history of ornery toughness, wit, and an uncanny ability to dissappear like chameleons into the mass of Hungarian peasants, but my mother became a refugee and eventually left for the US in 1948. 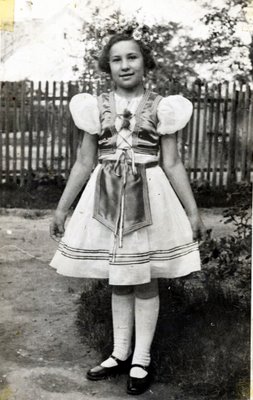 And it all leads to the parking lot of Costco in Hackensack, NJ. 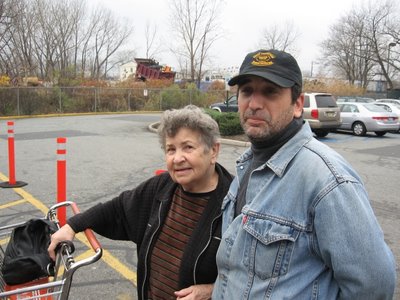 You're such a wonderful storyteller... you draw me into your family though I don't even know you. Marvelous writing and pictures!