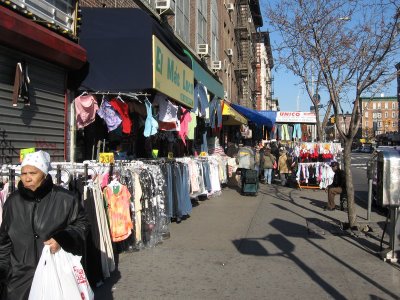 Walking around the Fort Washington neighborhood in northern Manhattan is one of my favorite time wasting activities. This is the home of both the city's older German Jewish community as well as the location of the Dominican Republic. Many of you may think that the Dominican Republic is located on an island in the Caribbean, but you are wrong, it is located at 181st St. and Broadway in New York. It is also one of the great eating and walking nabes of the city. 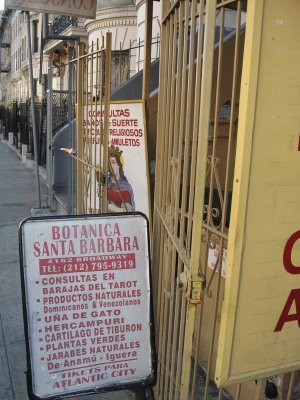 Like all Hispanic neighborhoods in New York, one finds the local botanicos everywhere, which serve the various Afro-Caribbean religions such as Santeria, which is based on the Yoruba religion brought to the new world by slaves. In Santeria, Santa Barbara is the Catholic "mask" which cloaks the identity of Shango, the Thunder God of the Orisha pantheon. Among other services offered here are tarot readings, shark cartilage, and herbs necessary to the Santeria ceremonies. But where else does Shango offer tickets to Atlantic City? 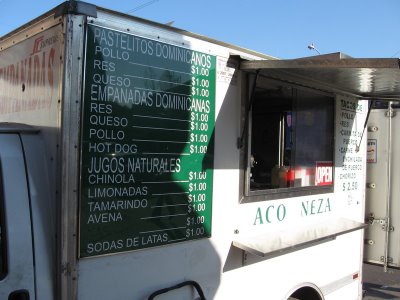 New York is famous for the high costs of eating out. Perhaps this is an undeserved reputation. Everything on the menu here - filled pastries and fried meat cakes - is one dollar. 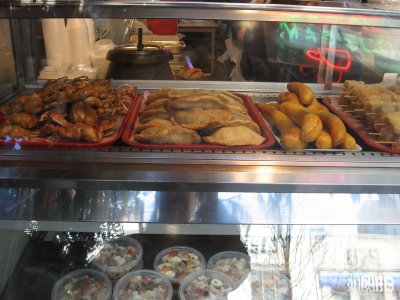 These are the offerings at one of Fumie's favorite New York eating spots, the Fish Market behind the George Washington Bridge terminal. Typical of Dominican places, everything is offered - maybe you didn't want fish? Maybe you wanted chicken? Fried plaintains? No problem - we got it all, primo! 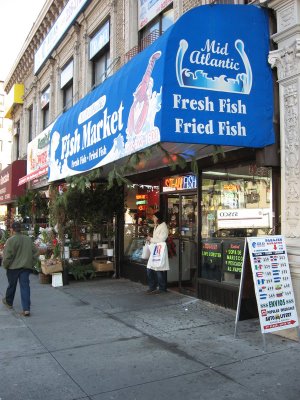 The first time I took Fumie here, everybody actually treated us as if we were tourists visiting the Dominican Republic. One guy sitting in a fold-up chair in the corner was munching away at a huge fried grouper fish, of which he offered us a bit. Everybody spoke Spanish with us, since, after all, we were visiting the northern outpost of La Republica Dominicana... 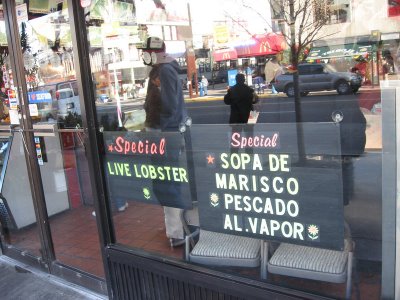 And this is the real thing: the seafood soup, sopa de mariscos. One Dollar. Five years ago Fumie declared it the best fish soup she ever had. I went in for a second opinion today. She was right. It was so good I forgot to snap any pictures. Oh well. It looked like... soup. Not entirely photgenic. But last night, after a klezmer gig at Moto in Williamsburg with Jacob Shulman-Ment and Pete Rushevsky, I did get the following amazing photo of the day. Where else, but in Brooklyn, would one be able to buy a subway ticket in Yiddish? 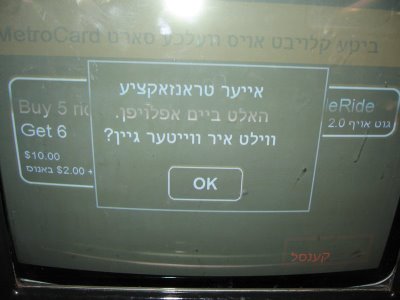